The Anchors marched on in the FA Vase today but despite dominating much of the posession during the game it took an excellent extra time performance to finish off Bridlington Town. Two fantastic strikes from mercurial Kev Hayes either side of goals from Roberts and Craggs thrilled the huge following and saw them through to the draw for the fourth round

Bridlington allowed Stockton a lot of possession in the first half, the Anchors worked hard but couldn’t take full advantage of it as the massed defence limited the space available.

5 minutes later Kev Hayes was released in the box by King but his right foot effort was saved by Hitchcock and those were as good as it got in terms of chances for a while as Stockton pressed but couldn’t get in behind. 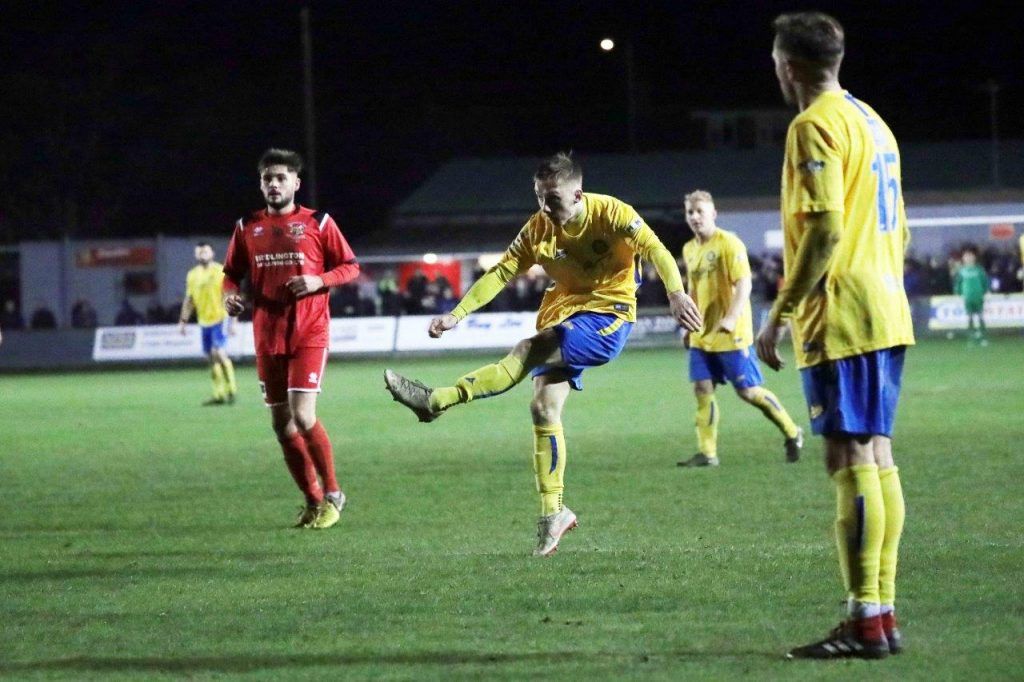 The Anchors could have probably finished the game off then, but the final ball eluded them. Risbrough burst forward on the counter but was cynically fouled as he cut inside and opened up the Bridlington defence, Mulligans free kick was scrambled clear.

The Bridlington subs seemed to unsettle Stockton and they had a patch of play when they put pressure on the Anchors using the physicality of the forwards and caused a couple of problems for the normally assured defence who were a little outnumbered at times. A scramble in the box nearly led to an equaliser but Logan lost his bearings as the loose ball fell to him.

Just a couple of minutes later it was 1-1 and it was LOGAN who slotted home after a good run into the box and pull back from Fraser Papprill.

The Anchors had to regroup and they did. Bridlington had blown themselves out in the effort to get level and the last few minutes saw the visitors back in control.

Extra time was dominated by the Anchors and the extra fitness and quality showed. It took just 2 minutes to regain the lead, Nathan Mulligan in space ran at the defence and picked out the run of ROBERTS cutting in from the left beating the offside trap and he finished coolly under the onrushing Hitchcock. 1-2

Bridlington looked tired now and Mulligans movement and direct style was causing them problems and again he latched onto a ball and cut inside but although Hitchcock made a good save from his effort HAYES had drifted across and picking up the ball from Craggs he beat one man and drove in a cracking shot from 20 yards which flew over the keeper and into the far top corner for a superb goal just before the break 1-3. Cue the trademark backflip. 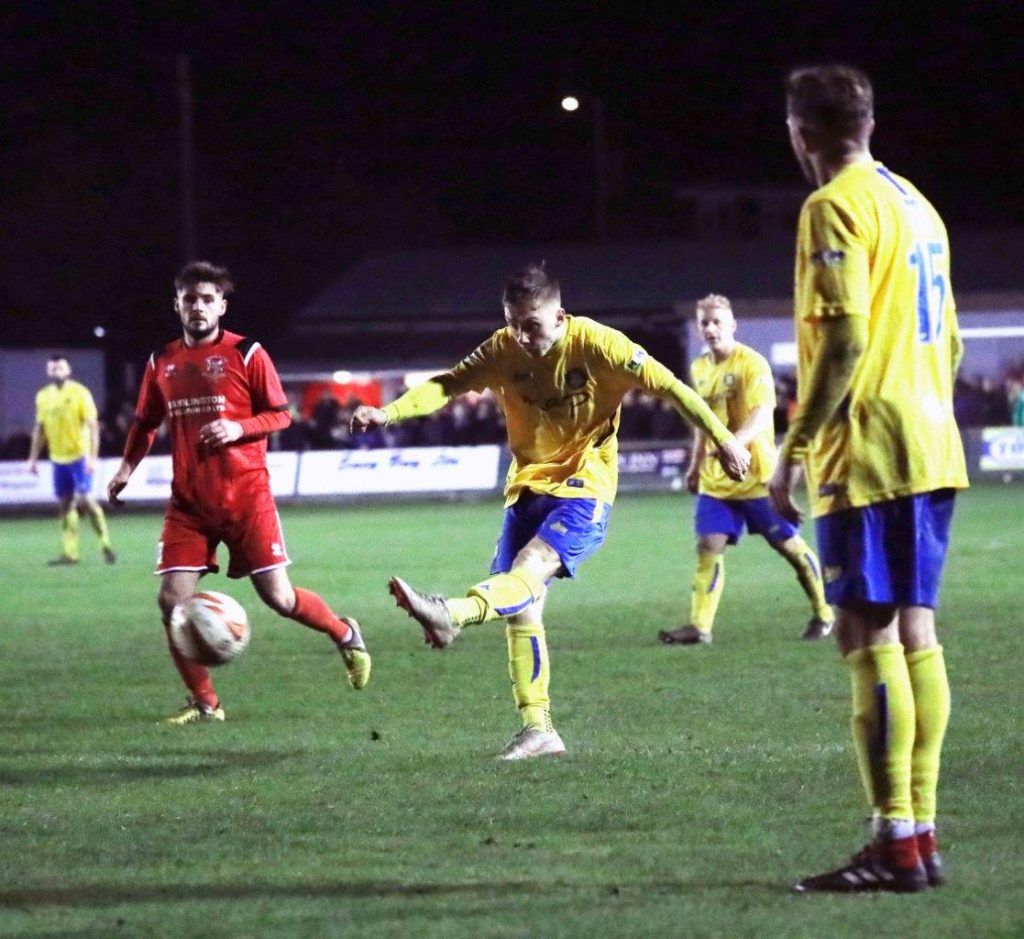 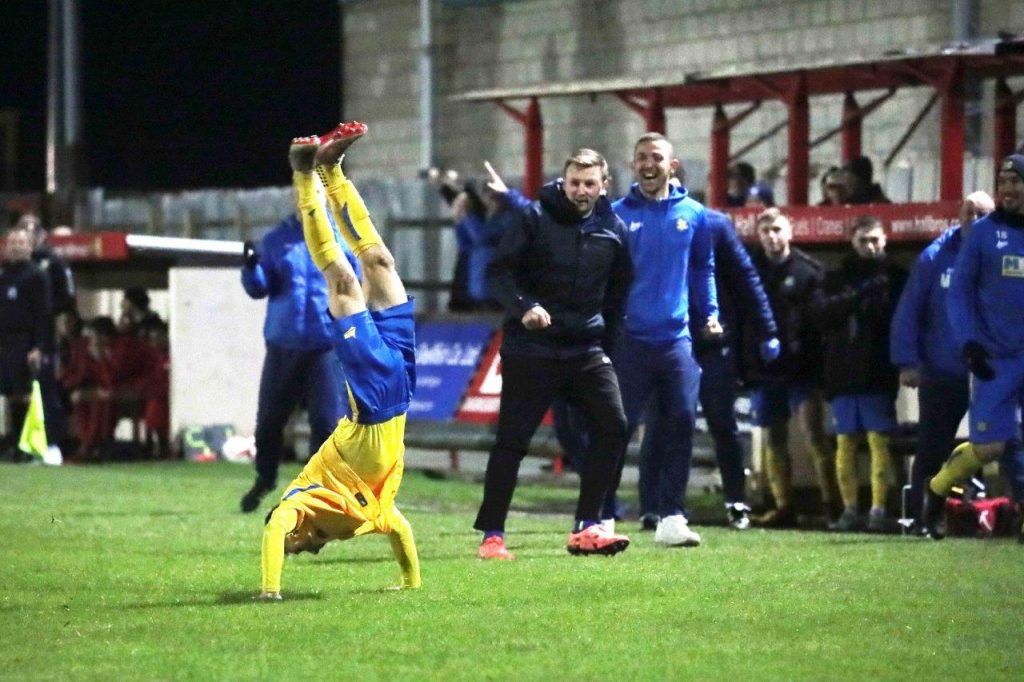 The game was pretty much sewn up now and the second period of extra time was all about Stockton and they controlled it well breaking quickly and bringing 2 super saves from Hitchcock to keep the score respectable.

It wasn’t a classic, but Cup football is all about the result. Stockton clearly the better side but allowed Bridlington, who offered very little for the first hour, back into it for long enough to cause a problem. Extra time was definitive and the huge following gave the players a terrific and deserved reception. In the hat as they say.

A special word for the 250 plus Stockton fans who travelled and sang their hearts out, thank you all from everyone involved, it means a lot to the club and especially the players.