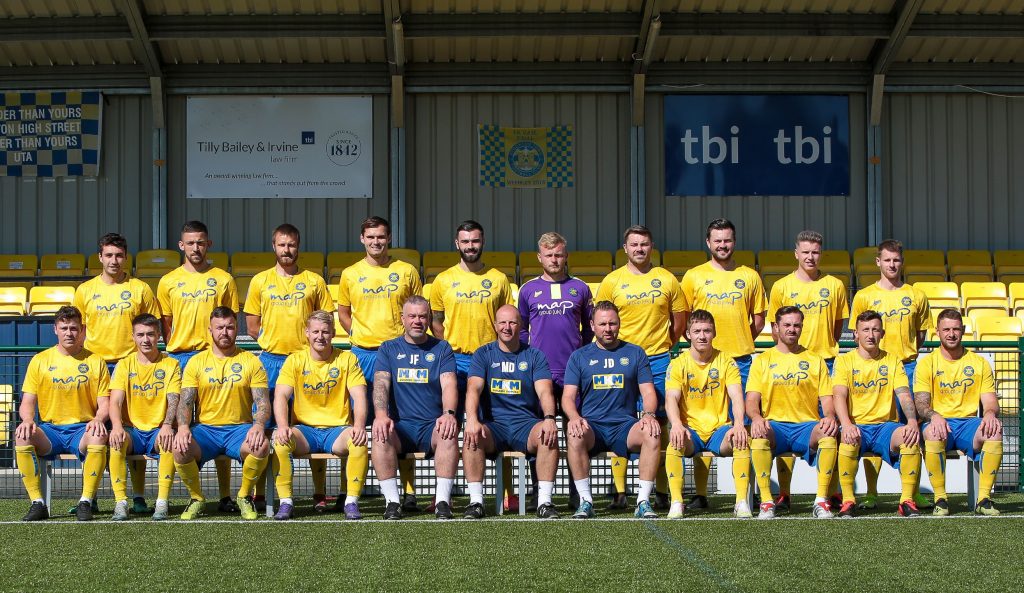 Stockton Town FC was formed in 1979 under its original name, Hartburn Juniors. Although records around that time are sketchy, it would appear the club was formed by Derrick Small who at the time was coaching youngsters from the Hartburn area of Stockton at the local YMCA. The club home colours of yellow/royal shirts & royal shorts established then, remains the same now.

Throughout the eighties and nineties Hartburn Juniors continued to grow and operate as a junior football club, competing in the Teesside Junior Football Alliance. The Club from time to time had various bases around the town but the early years of the new millenium  saw a marked change in the Club and a permanent base at Our Lady of St Bedes School on Bishopton Road West, Stockton.

It was felt by the members that the club name didn’t really reflect the area where most players came from. The club had grown and now had players who came from all over Stockton Borough so it was decided to change the name to STOCKTON TOWN FC. There was also a desire to resurrect a senior football team to represent the Town of Stockton and it was felt this would create a great development opportunity for the whole club and provide to achieve this from grass roots through a junior football club was possible.

In April 2008 the Club underwent a massive investment totalling £1.4 million pounds which also saw a partnership with Stockton Borough Council, Stockton 6th Form College and Our Lady & St Bedes School to develop the facilities at the Site, building a new Clubhouse and changing facilities. This development was the springboard for a further expansion for the Club.

The next step was to introduce Open Age Men’s Football to the Club. Stockton Town had proved very successful in producing top quality young players that then from age 16 went on to play for various local non-league teams. The Club decided it wanted to give these youngsters an opportunity to stay within the Club. So in Season 2009/10 Stockton Town using a mix of players from the outgoing and current U18s, some returning ex Juniors and one or two old heads, they entered a team in the Teesside League 2nd Division.

The 1st game in Senior Football was an away fixture at St Marys College, Middlesbrough, which ended in a 2-1 defeat. Having led the League for most of the Season they faded in the Spring to finish 4th. The Club and the Players were keen to progress and the summer of 2010 saw Stockton Town successfully apply for membership of the Wearside League for 2010/11 season. The team struggled in the early part of their first season in the Wearside League, but an impressive run of results after the Christmas/New Year saw them finish a creditable 10th.

The improvement continued in 2011/12, with a 3rd place finish and a League Cup Final appearance, losing 2-0 to Ryhope CW. In 2012/13 Stockton Town, with a squad made-up mainly of young, local homegrown talent won their first Trophy in senior football clinching the Wearside League Title with a spectacular run-in, winning the final 12 games to overhaul Willington FC in the last game of the season. 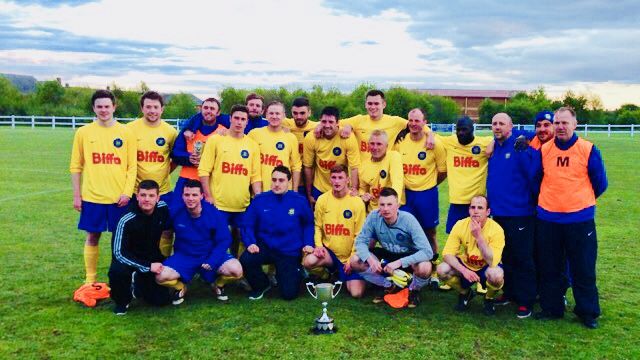 The following season a 2nd Wearside League title was won a little easier but brought another Cup Final defeat to Ryhope CW. This heralded the start of a period of domination in the Wearside League for Stockton Town’s young but maturing squad. In 2014/15 the Club completed the clean sweep of League Title, League Cup, Shipowners Cup and Monkwearmouth Cup, a feat achieved only twice before in the history of the League, unbeaten in all competitions the team missed out on a ‘perfect’ season by losing their second last League game disappointingly, away to Prudhoe. The next season saw a 4th consecutive League Title along with the League Cup and Monkwearmouth Cup back in the Bishopton Road Trophy Cabinet. During this period the Club had been working to improve facilities to the required standard to gain promotion to the Northern League and after twice being thwarted at the last minute, promotion was finally achieved in the Spring of 2016 and shortly after the Club opened it’s 3G Stadium facility with a League game against Horden.

The 2016/17 season saw the unprecedented success continue in the Clubs first season in the Northern League 2nd Division by winning the League Title and losing the EA Cup Final to Northallerton Town on penalties. In a memorable first campaign in the Northern League the Club was visibly growing and topped the average attendance charts for Div 2 (179). Stockton Town unbelievably had risen from an U18’s team to ENL Div 1 in just 8yrs.

Season 2017/18 saw a disastrous, almost terminal, start to the first season in ENL 1 turn into the season of a lifetime for everyone involved at the club. After losing the first 8 League games the team rallied to win 19 and draw one of the next 23 matches a run that saw the Anchors climb the table to safety and also setup an exciting run in the FA Vase. The highlight being beating competition favourites West Auckland in Round 5 in extra time of a thrilling game. Comparatively straightforward home victories against Stourport Swifts and Windsor FC set up an all ENL Semi Final clash with Champions elect Marske United. An epic two legged affair took place, with both games played on Stockton’s Home ground, ending with joyous scenes and pitch invasions from the huge 1800 crowd as Stockton Town edged out Marske 3-2 on aggregate to clinch a place at Wembley. Before that glorious day arrived the Anchors knuckled down and won 6 of the last 7 League games to finish a creditable 6th but miss out on a League Cup Final, disappointingly losing at home in the Semi Final after two terrific away wins at Morpeth and North Shields. The Vase Final was a day to remember a fantastic occasion for the Town and the whole of the Club but despite a brave attempt the lads went down 1-0, the memories will last forever. 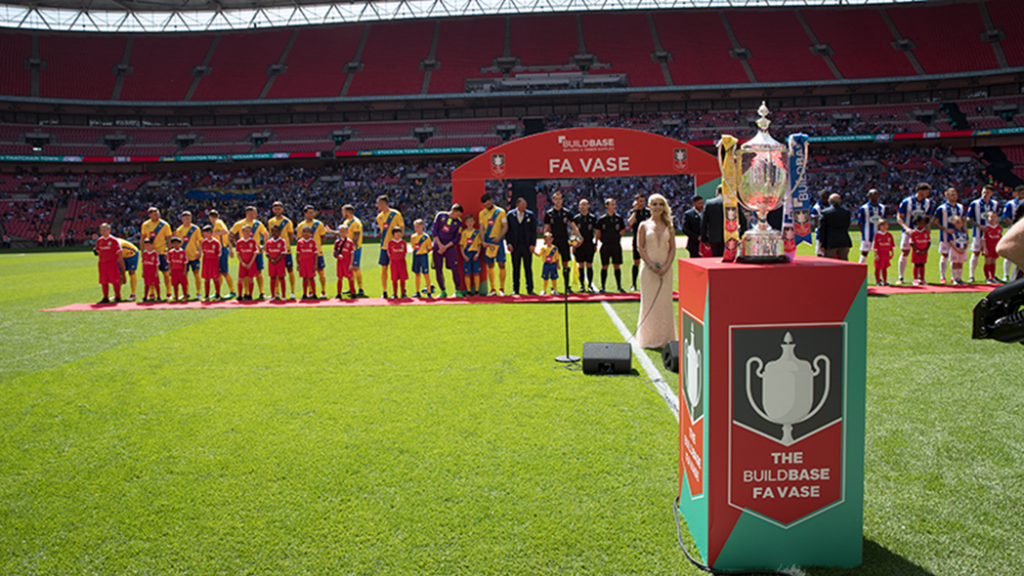 After another good but at times frustrating season in  2018/19, the club made a series of key signings in the close season with a view to pushing for promotion to Step 4 and the proposed ‘additional’ East Coast Division.  The return of prolific striker Jamie Owens complimented a return to his roots for ex Darlington FC star Tom Portas. Dan McWilliams arrived from Whitby and what proved to be just as significant was the capture of ex Preston NE Goalkeeper Callum Roberts and young full back Lewis King who joined from Spennymoor after spending the previous season with Burnleys youth set up.

It was the defence that was the foundation for what was building to be a season of a lifetime only for the pandemic restrictions to force the FA to end it prematurely and cruelly leave the Anchors with nothing to show for all their labours. They dominated the League campaign losing just once and conceding a paltry 14 goals in 30 League matches, they were on an 18 game unbeaten run when the curtain was brought down and pretty much steam rolling their way to glory. Good runs in the FA Cup and Vase along with a jaunt to the semi final of the Durham County Cup (shocking South Shields on the way) looked to merely punctuate what seemed to be a a runaway promotion and Title winning campaign. Record crowds were seen no less than 3 times with over 900 attending the League fixture on Boxing Day 2019 and an average of 500 for League games showing how far the club had come and almost certainly a four-figure crowd was inevitable before the final game. Memories of famous victories and an exciting season will live on forever but no official record of the achievements will be held.

The Anchors headed into the 2019-20 season with one target in mind – promotion. Michael Dunwell’s side were in pole position to win the league title before the COVID-19 pandemic brought a halt to everything. Prior to the stop, Stockton had just lost one of their 30 league games, conceding just 14 goals all season, and were on an unbeaten run in the league of 20 games, which stretch from the end of October 2019 to March 2020. There was to be no more football played in the 2019-20 campaign and the FA declared the season null-and-void. There was no doubt the Anchors were the top team in Northern League Division One, however, they would be spending the following season in the same league after it was also announced there would be no promotion and relegation.

As always, the club marched on and the Anchors signed Spennymoor Town midfielder Shane Henry and former defender Dale Mulligan re-signed for the 2020/21 season. With the bit between their teeth, Stockton went into the season wanting to pick up where they left off. The season itself began with a 2-0 win against Shildon in the FA Cup, but there was only 12 league games played before the UK went into another national lockdown in November 2020 – the Anchors were sitting second in the table with 27 points. Football did return, but it was the FA Vase and not the league as Stockton beat Charnock Richard 4-2 at home after a four-week break before losing out against Shildon in the next round of the competition. This turned out to be the final match of the 2020/21 season as the pandemic continued and meant no more football could safely be played.

With over 40 games played across the two seasons, question were being asked as to what would happen with the outcome of the season. The Football Associated decided to combine the two seasons during their restructure of non-league football, meaning the Anchors finished top on points-per-game – therefore gaining promotion to the Northern Premier League for the first time in the club’s history.