STOCKTON TOWN returned to winning ways with a bang, overcoming Sunderland RCA 4-2 at the Coverall Stadium.

Goals from Mikey Roberts, Nathan Mulligan, Adam Nicholson and Fred Woodhouse saw the Anchors complete the double over their visitors following a 3-0 triumph at Meadow Park earlier in the campaign.

Michael Dunwell made two changes to the side which dropped out of the FA Vase last weekend with a welcome return for Jordan Robinson at the heart of defence as well as Sonni Coleman slotting back into a starting role alongside Roberts in attack.

The Anchors made a flying start as they sought to bounce back from three consecutive defeats. They had the ball in the net as early as the fifth minute through Max Craggs but the strike was ruled out with the referee blowing for a somewhat innocuous foul on RCA goalkeeper Dimitrios Tsapalos.

If Stockton felt hard done to, it wouldn’t be for long as they seized the advantage just a minute later. Excellent work down the left from Coleman afforded him the opportunity to slide the ball to Roberts in the area. The Anchors’ leading marksman made no mistake with the finish, sending Tsapalos the wrong way to break the deadlock. 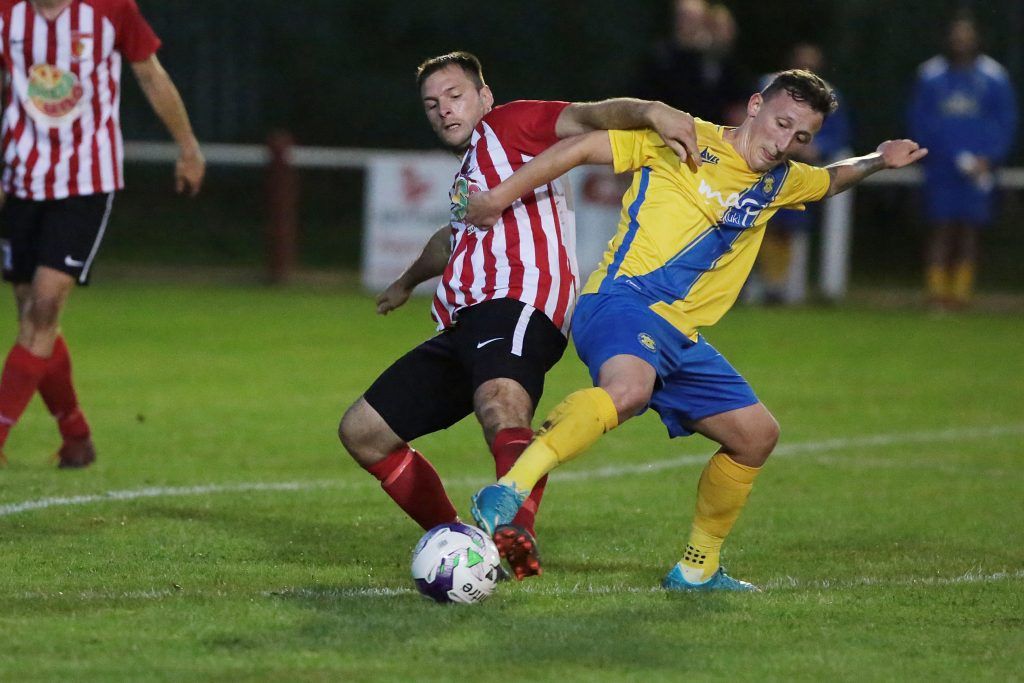 They could have doubled their lead just three minutes later when some mercurial midfield magic from Craggs saw him play a deft through ball to Mulligan. He managed to hit the target with his strike but it was straight at Tsapalos, who dealt with it comfortably.

Anchors fans weren’t made to wait too long for the second goal and it was through Mulligan that it would come. His low left-footed drive from outside the area seemed to come from nothing but arrowed its way into the bottom corner to double his side’s lead and extend his impressive tally for the season.

Stockton had enjoyed a stranglehold on proceedings in the early going but that was to change midway through the half as they saw their lead slip away.

The visitors halved their deficit on 17 minutes from the penalty spot after Tom Coulthard was judged to have brought down Nathan O’Neill from a right wing cross. Dylan Elliott stepped up, sent Michael Arthur the wrong way and dragged his side back into the contest.

Sunderland RCA were level after 23 minutes and Stockton were the architects of their own downfall. A deep ball from the left saw some Anchors defenders step out whilst others stayed in the line, allowing Michael Charlton to inevitably get the better of the offside trap. He beat Risbrough to the ball before dispatching it past Arthur for the leveller.

It was a crazy few minutes for Stockton and they had invited the visitors back into a game that was heading beyond them in the opening quarter of an hour.

Stockton finally settled once more and could have hit the front again on the half-hour mark. Craggs’ outswinging corner found the head of Coulthard but the defender failed to get his header on target. 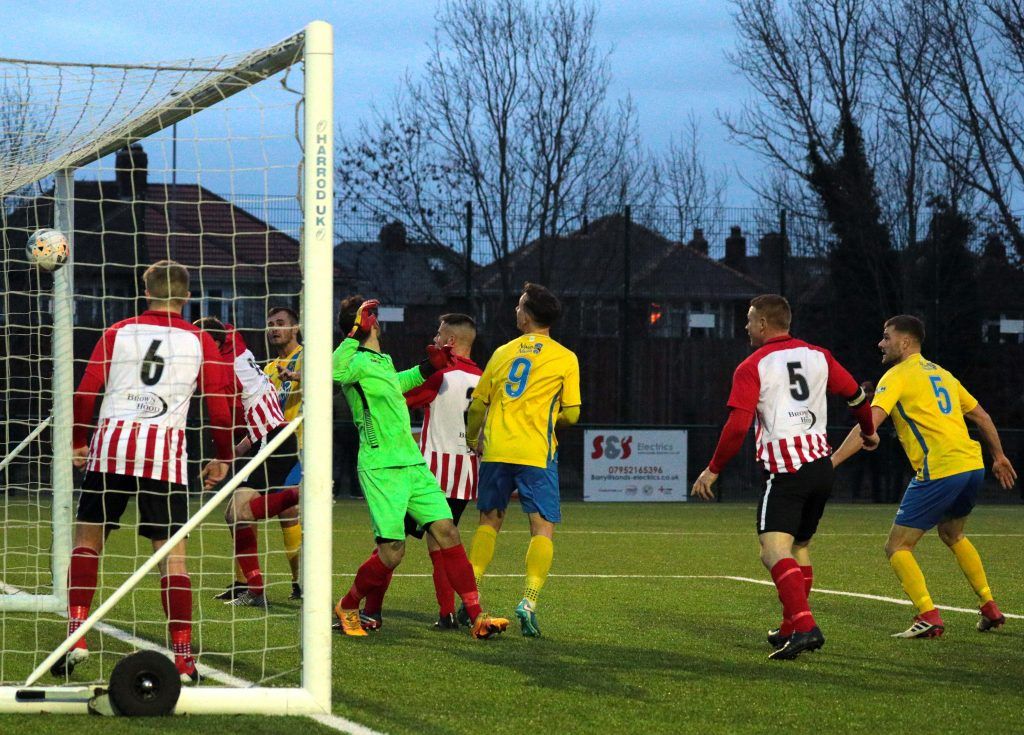 Adam Nicholson regained the lead for Stockton with a powerful header.

The lead was finally regained eight minutes before the interval and again it was a Craggs corner causing problems for the RCA defence. This time it was an inswinging delivery that was deep and met by a powerful Nicholson header at the back post as Stockton took a lead into half time.

Stockton looked to build on their advantage as the second half got underway and could have doubled their lead five minutes after the restart. Craggs linked with Roberts on the edge of the area before sending a strike goalwards. His effort was dipping but was acrobatically denied by Tsapalos.

If the RCA ‘keeper was pleased with his efforts in denying Craggs, he’ll be equally as rueful with his contribution to Stockton’s fourth goal. Woodhouse, coming of a hat-trick last weekend, struck a speculative effort from 25 yards that found Tsapalos’ bottom right corner. The goalkeeper could and should have done more to keep the strike out. The Anchors have been on the wrong end of some high scoring games in recent weeks but they could sense victory in this one after Woodhouse’s strike. 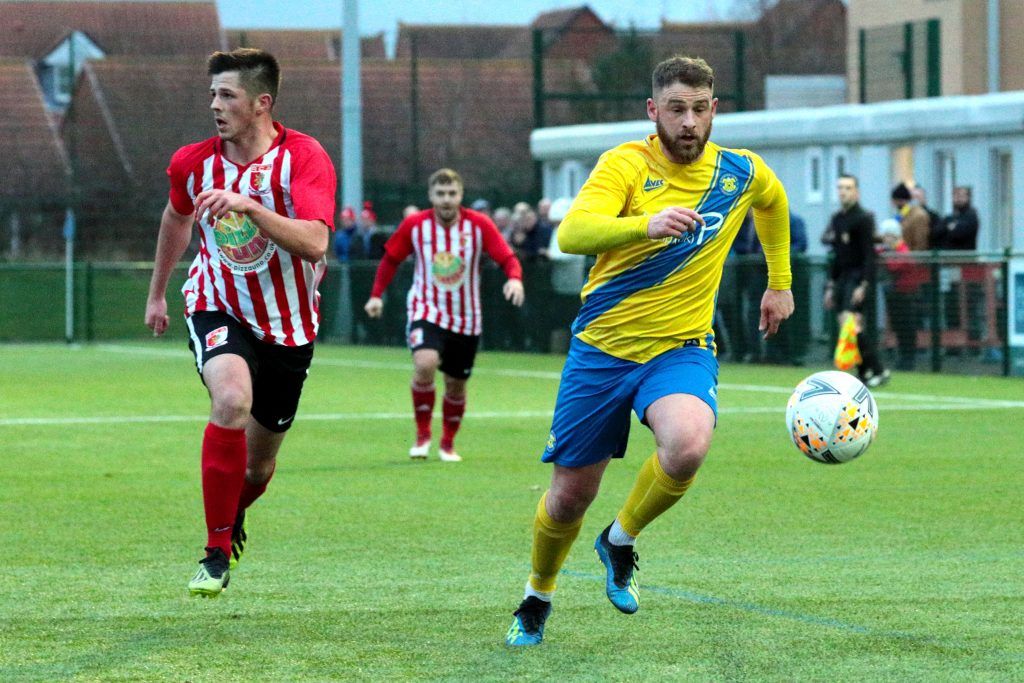 Fred Woodhouse has been in fine goalscoring form with four goals in his last two games.

The visitors pushed as the second half progressed and had opportunities to reduce their arrears in the game’s final ten minutes. First, the Stockton defence switched off from a short corner and the ball ricocheted around in the area before dropping to O’Neill. The imposing target man snatched at his effort and failed to test Arthur.

He went closer eight minutes from time but again couldn’t find the goal that would have put Stockton under pressure in the closing stages. Substitute Colin Larkin crossed from the right and the ball was nodded back across goal to O’Neill by Kyle Davis. This time the forward made a good connection but, much to his chagrin, saw his strike cannon back off the frame of the goal.

It was an important win for Michael Dunwell’s side who now turn their attention to League Cup action against the same opposition at Meadow Park on Wednesday night. Can the Anchors complete the treble over RCA?