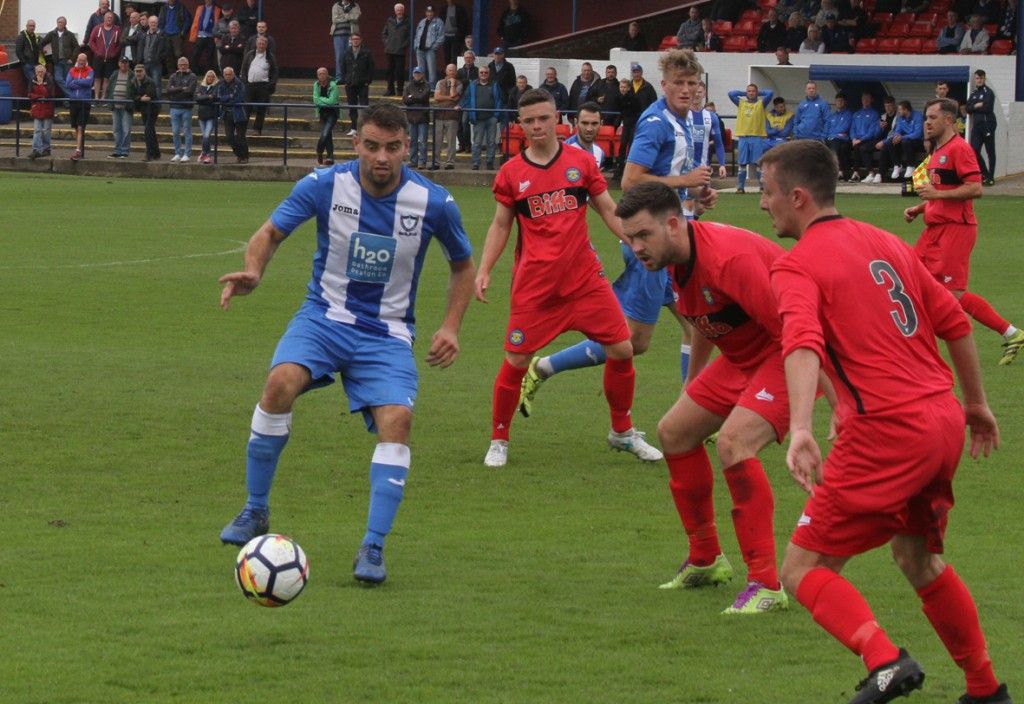 Stockton are still waiting for there first points of the season following this 2 0 loss at Whitley Bay. Stockton played well in parts but the hosts had a little bit too much on the day.

The first opportunity was created by Kyle Patton after six minutes when he turned inside the 18 yard box and his low shot took a deflection and flew past the upright. Defences were on top in the opening stages but with 14 minutes played, Scott Jasper evaded several challenges as he burst through from midfield and chipped the ball only narrowly wide of the post. Midway through the half Hayes brought a save from Tom Flynn before Tom Potter’s low cross was poked just wide by the onrushing Jasper. A well timed tackle by Ross Wilkinson denied Coleman a clear shot on goal for the visitors before the Bay defender got a vital touch to clear the danger when a cross came in from the left. Whitley were forced into a defensive reorganisation five minutes before the interval when Callum Anderson was unable to continue after picking up an injury, Glenn Reay coming on for his first appearance in Bay colours.Stockton found themselves a goal down nine minutes after the interval when Jack Byerley’s low cross beyond the Stockton defence into the goalmouth was slotted home from close range by Jasper.Boosted by the goal, Whitley went close two minutes later when Kyle Patton was not far off target from Tom Potter’s cross. Shortly after this near miss, Kempster’s ball into the danger zone caused problems for the Stockton defence who were relieved to see Potter’s shot clear the bar.Whitley were now posing the greater threat but Stockton were still in the game and with 15 minutes left, a header flew just wide of Flynn’s goal, although the keeper appeared to have the ball covered. Four minutes later an effort from Jamie Owens flashed across the Bay goal and out of play. That was as near as the visitors got to claiming an equaliser and with nine minutes remaining, Charmey’s perfect through ball was met by Potter who slotted it home just ahead of the onrushing Jordan. With a two goal advantage, Whitley were firmly in control and comfortably saw out the game and might even have extended their lead further, Kempster narrowly failing to add a third goal in stoppage time.This was certainly not a classic but Whitley ground out a deserved victory over a well organised Stockton side.