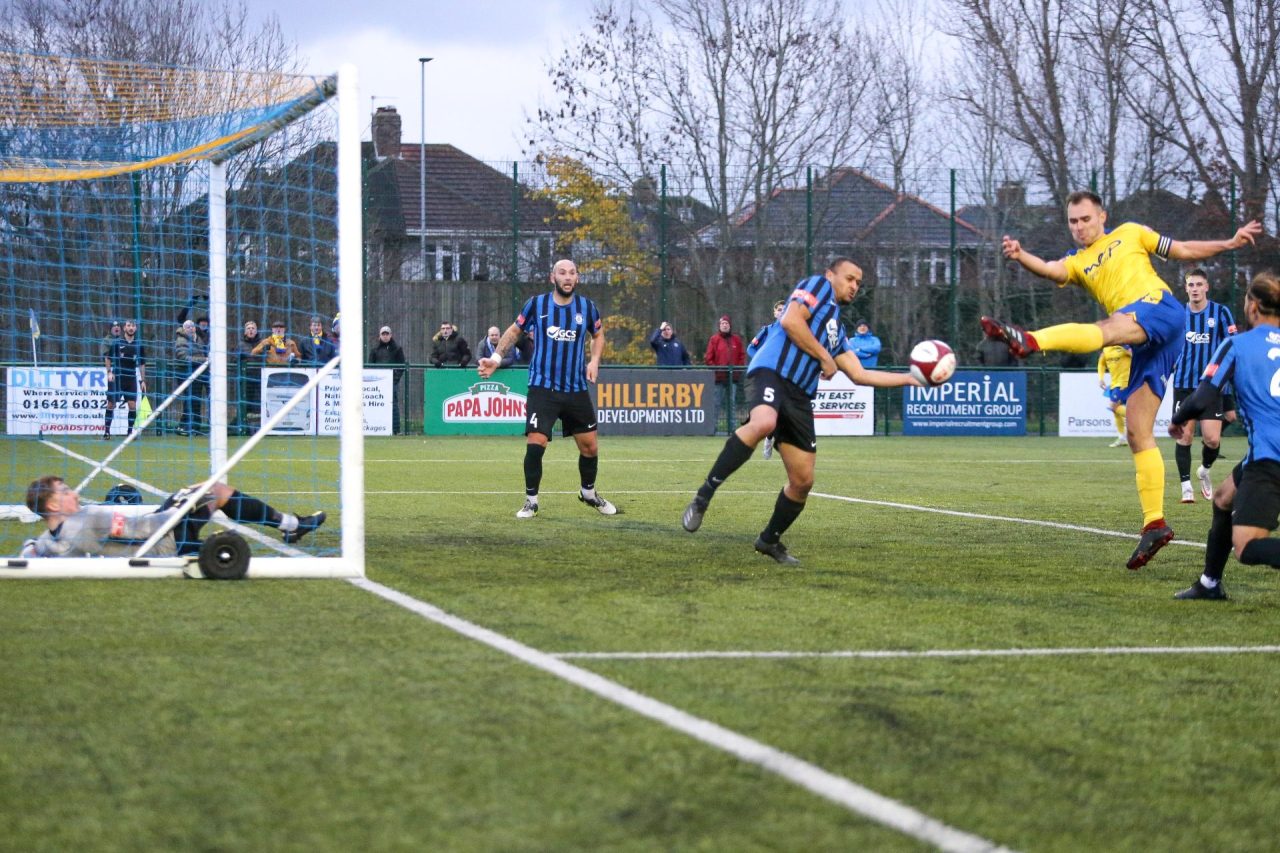 The game’s goals all came in the first half. Long Eaton took the lead inside three minutes when Luke Cox headed in from a corner.

They doubled their lead shortly before halftime through Tom Cursons. They only held a one-goal lead at the half though as Adam Nicholson reduced the deficit at the end of the half.

Stockton pushed for a leveller in the second half and were given the perfect opportunity when they were awarded a penalty in stoppage time. Substitute Nathan Mulligan stepped up and saw his penalty wonderfully saved by Sam Wilson in the Long Eaton goal.

The Anchors made two changes for the game as Tom Coulthard and Kev Hayes returned to the starting XI after missing last week’s game at Grimsby Borough due to suspension. It was big milestone for Coulthard who was appearing in his 400th Stockton Town game.

Long Eaton started the game brightly and had an early lead when Cox headed past Patrick Boyes from a right-wing corner.

Stockton almost responded four minutes later but Elliott Beddow was denied by Wilson after he was played through by Tom Portas.

Long Eaton were denied the opportunity to double their lead when a giveaway lead to a two-on-one which resulted in an excellent block from Coulthard on a Cursons shot.

There were plentiful chances in the opening exchanges and Stockton had another when Lewis King was played in one-on-one in the box but he could only fire his effort at Wilson.

In the 22nd minute the officials were forced into a change when the linesman went off with injury. A qualified referee from the shed end stepped in and the game continued.

Long Eaton had the first chance following the restart as Micah Jebbison found his way in but his effort was struck wide.

Stockton Town then had an opportunity when Glen Butterworth found Kev Hayes out wide, he typically cut inside before unleashing a shot that went wide of the post.

The Blues had another chance to double their lead but Jamie Walker headed wide when presented with a free header at the back post.

The Anchors then had a chance as Kev Hayes pulled back for Mikey Roberts who had his effort saved.

Long Eaton doubled their lead when Cursons was presented with an open goal following a major mix-up between Coulthard and Boyes.

Stockton did not let the mistake put them completely down and they set the game up for an interesting second half when Nicholson scored at the second attempt following a brilliant save by Wilson from his initial effort.

Nicholson was to thank for keeping it a one-goal game when he denied Jack Rogers with a goal saving tackle nine minutes into the second half.

The Anchors were unable to craft any meaningful chances early in the second half. The first big chance came from a Butterworth freekick which he floated in for Nicholson who chested it down into the path of Coulthard who volleyed over.

Butterworth then tried to score himself with a fizzing shot that was grabbed at the second attempt by Wilson.

Set pieces remained Stockton Town’s best chance of getting back into the game as Nathan Mulligan struck the crossbar with one from his usual territory.

In stoppage time, the Anchors were given one last chance to take a point when Coulthard was fouled in the area.

Nathan Mulligan stepped up but once again Wilson was on hand to deny Stockton with a great save.

A day to forget for Stockton who face back-to-back away games at Cleethorpes Town and Worksop Town over the next two Saturdays.