Stockton Town are to have their achievements recognised by North East Football Writers Association.
We are to attend the Association’s annual dinner, which takes place at Ramside Hall Hotel in Durham on Sunday 17th February.
Stockton Town will be recognised for their run to the FA Vase Final, which came just two years after they were promoted from the Wearside League.
Michael Dunwell’s side saw off the likes of Consett, City of Liverpool and West Auckland Town to set up a two-legged semi-final tie against local rivals Marske.
The Anchors secured their place at Wembley with a 3-2 aggregate win, but couldn’t top off their historic run with a win in the final as we fell to a 1-0 defeat against Thatcham Town at the home of English football.

NEFWA secretary Colin Young revealed that the continued success of the region’s non-league scene is why they have become a special part of an event that was primarily focused on Premier League and Football League clubs.
He said “We made a conscious decision to recognise an aspect of the game that has delivered silverware for our region. It is a fairly recent addition to the evening, but it is an important one too.
“You only have to glance at the success that the region has had in the FA Vase to see what our non-league clubs have achieved.
“We have also recognised the promotions and championship wins achieved by the likes of Darlington, Spennymoor Town, Morpeth Town, Blyth Spartans and South Shields in recent years.

“It is important that the association recognises success at all levels of our game, and we are delighted to have South Shields, Marske United and Stockton Town joining us for our annual dinner at Ramside Hall.” 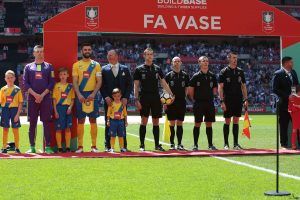