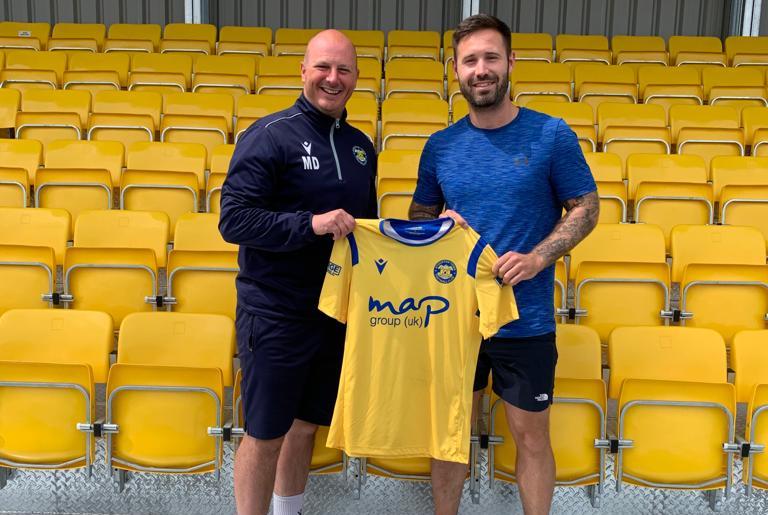 Stockton Town are delighted to announce the signing of striker Matthew Tymon.

The 32-year-old started his career with Hartlepool United and after a two-year spell with Workington, he made the move to Whitby Town.

After departing from Whitby in 2020, Tymon signed with Marske United, where he went on to score 32 goals in 68 appearances over the last two seasons.

The striker, who featured three times against the Anchors last season, played a pivotal part in the Seasiders’ promotion from the Northern Premier League East.

Having had that success last season, Tymon admitted Stockton’s ambition and targets for the upcoming campaign were a major factor in him putting pen to paper.

“It was the ambition of the club and where they want to go for me,” he said. “I spoke to Michael (Dunwell) and he told me about the targets for the coming season.

“They’re looking to get promoted this year and it fits in with what I want. I want to challenge at the top end of the table, like last season with Marske, but hopefully go one better.

He continued: “I wanted to join because I know the formation suits my way of playing perfectly as well.

“Playing in front of the fans, they’ve got one of the best fan bases around and led the way with big attendances last season.

“It’s just an exciting opportunity for me to join and I can’t wait to get going.”

The Anchors finished fourth and made the play-offs in their first season at Step 4, and Stockton’s newest recruit has set his sights set on the team finishing higher in the 2022/23 campaign.

Tymon said: “I really want to win the league. With the squad that we have at Stockton, I don’t see why we wouldn’t be looking to go and finish top.

“Personally, I want to play and score goals, but the main objective for me is to win the league.”

With the departures of strikers Jamie Owens and Nathan Steel, manager Michael Dunwell said that was one key area the club were looking to target this summer.

After the signing of Stephen Thompson from Spennymoor Town, Tymon has become the second striker to put pen to paper, and Dunwell expressed his delight to get his man.

The Stockton manager said: “Matty is proven at a higher level. He’s had spells at Whitby (Town) and Marske (United), and is an out-and-out centre forward, a number nine, who will get hold of the ball for us.

“He’ll bring others into play and also be a major threat in the box. What we want from Matty is for him to score goals, and that’s what he’s done everywhere he’s been.

“It’s another player who’ll bring goals to the team and hopefully drive us on this coming season.

“As soon as we knew that Nathan and Jamie wouldn’t be here, we knew straight away that we wanted to get Matty and Thommo over the line.”

Season tickets have gone on sale for the 2022/23 season and supporters click here to purchase theirs.