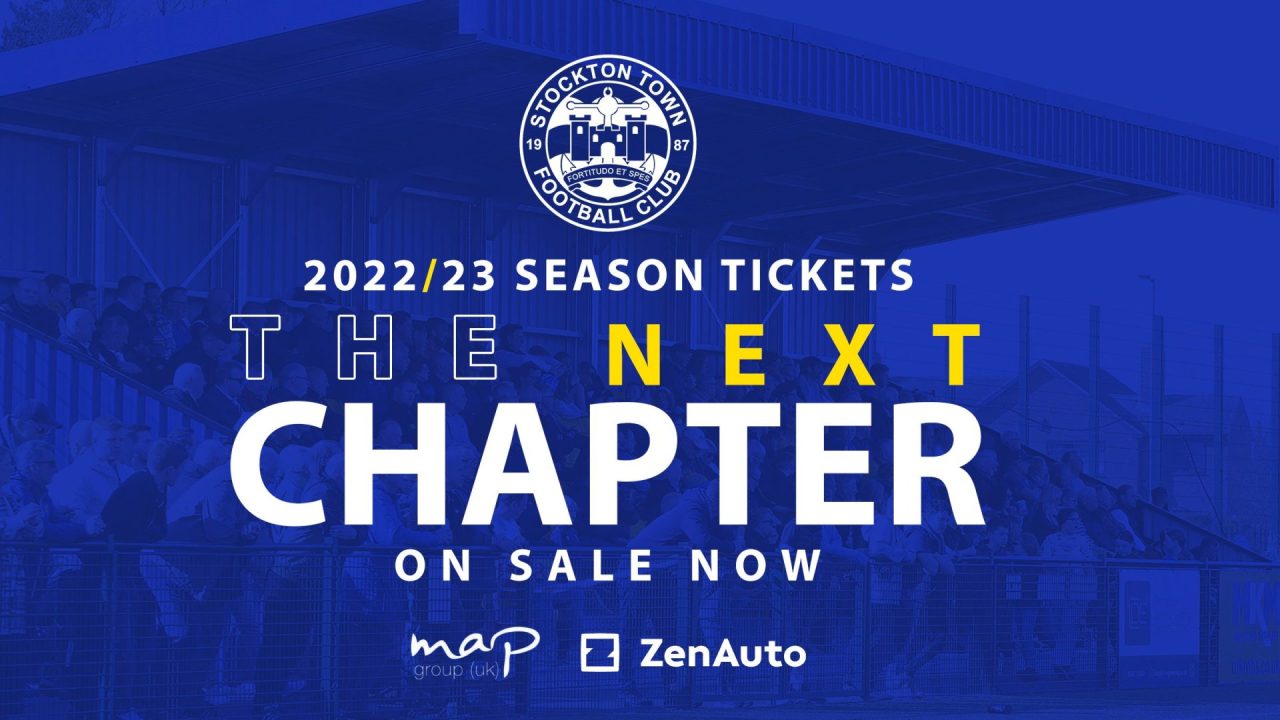 Stockton Town Football Club are pleased to announce that Season Tickets for the 2022/23 season are now on sale, as well as details on General Admission.

The upcoming season will see the Anchors compete in the Northern Premier League East Division for the second time, following an impressive run to the Play-Off Final in their debut campaign at Step 4.

After finishing fourth in the table, Michael Dunwell’s men saw off Cleethorpes Town 2-1 on the road in the semi-final before the Anchors lost in the final to neighbours Marske United.

In their home games last season, Stockton Town led the way in the division with an average attendance of 633 and surpasses the 1,000 mark on two occasions during the 2021/22 campaign.

Firstly, the highest attendance of the season saw 1,208 spectators turn up for the New Year’s Day clash with Shildon, and 1,179 fans watched on as the Anchors drew 2-2 with Marske in the final home game of the season.

The support the Anchors get on a weekly basis, home and away, is unrivalled and we need your support for yet another historic campaign for the club.

As a Club we are very conscious of the current economic climate and we have tried to balance this with the increases we are seeing in our expenditure and the ambition’s of the Club to compete at the highest possible level we can within the National League System.

Having considered all of these pressures we have decided that we must increase admission charges for the coming season.

Club Chairman Martin Hillerby said: “As a Board we had difficult decisions to make, but felt we had little option but to increase admission charges for the forthcoming 2022/23 Season if we wanted to keep progressing as a club.

“We are eternally grateful to our fantastic supporters who follow us home and away and we genuinely hope you understand the reasons.

“There will be discounts on a match by match purchase with a Season Card and these are discounted further for early purchase.

“Our “Gold Season Card” holders will once again have the benefits applied to their renewals as previously advised.  With the recent Ground improvements we are also able to re-introduce reserved seating for Season Card holders, which we know some of our older supporters are keen to take up.

“Overall we hope you all feel you can get behind the Club once again as we look to improve on last season.”

The following admission charges will apply for the forthcoming 2022/23 season in which we will compete in the Northern Premier League East Division.

Season Cards are available now and offer a discount over the season on normal game by game admission costs. The Season Card is valid for League matches only,  as well as free admission to all home pre-season friendlies.

We are also offering the ‘early bird’ discount for Season Cards as long as they are purchased before the 19th June 2022.

All Season Card renewals and new applications can now be purchased through the Ticket Office on the Website.

Child £1 (Free if accompanied by an Adult)

You can download a Season Ticket Application Form by clicking on the link below. Simply complete the Form and hand in at the Bar in the Main Clubhouse and make payment. The Club will then be in touch to confirm when your Season Card will be available for collection.

Thank you for your continued support it is really appreciated by all involved at Stockton Town.

Any queries please call the Club on 01642 604 915 or or email seasoncards@stocktontownfc.com.