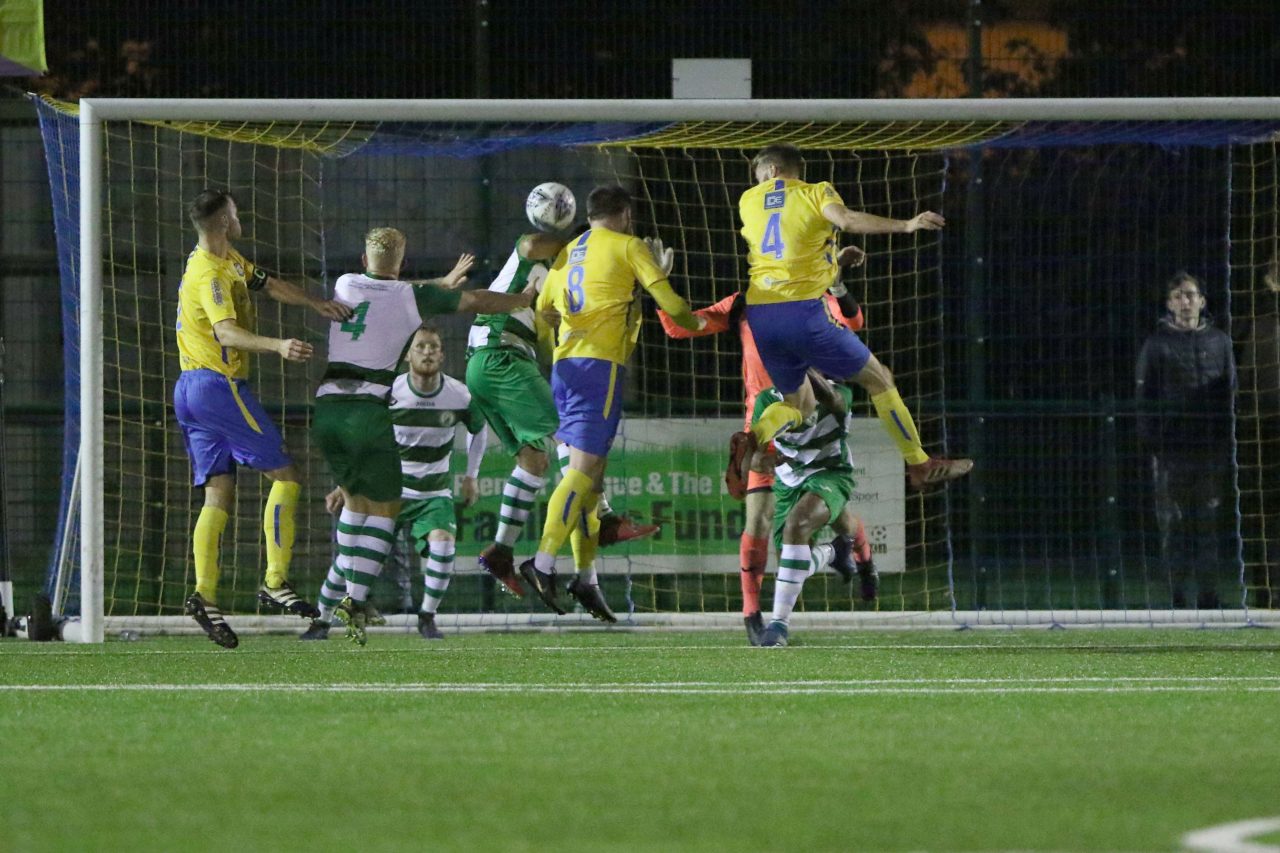 The Anchors hopes of progressing in the League Cup are hanging by a thread after defeat tonight by a decent West Allotment side and it was a result you couldn’t argue with.

Michael Dunwell rested some players ahead of Saturday’s Vase game but it was still a strong line up, despite a spirited start they became disjointed for periods and didn’t really do enough to win the game. West Allotment grew in confidence as the game went on and created some decent chances in the second half and probably edged it

Stockton started on the front foot and forced a couple corners Adam Nicholson got free but his header was straight at the keeper and then from another corner just 2 minutes later he met the cross on the volley but it flew just over the bar.

West’s first attack produced a corner and it was a good one curling into the near post, Errington got there just before the keeper but his flick went over the bar.

The Anchors looked lively and they moved the ball about well, Jimmy Ward he slipped a lovely curling pass into the path of Mikey Roberts run but West’s keeper smothered the chance well and it went for a corner.

The visitors were growing in confidence though as the Anchors failed to produce a goal and the impressive Mikel Thompson was causing problems down the right and he burst through into the box on 23 minutes but dragged his effort just wide. 5 minutes later and a good run forward by centre half Burns set up a chance for Hayton who’s curled effort lacked power and Callum Roberts got down low to his right to save.

It was end to end now and the Anchors were certainly in a game, James Risbrough broke through from Craggs pass and his shot deflected for a corner, unfortunately the referee didn’t like something he’d said and it resulted in him being the first player to be sin binned this season. From the resulting corner Nicholson was again on the end and his header beat keeper Hodgson only to see it hooked away off the line HT 0-0

The Anchors early pressure came to nothing again and after a free kick broke down they were saved only by Roberts flying out of his goal to deny Walker.

Risbrough was straight into the action after his return from the naughty step and his pace got him into a good position, his cross picked out Roberts who got there before the defender but couldnt find the target.

West were finding space in front of Stocktons defence and Hayton linked with Mendes-Correia and the latter should have done better as he fired wide with only the keeper to beat.

It was Woodhouse’s turn next as he shot from the edge of the box but Hodgson was equal to it and he got down low to save. With 70 minutes gone and Stockton needing to win The Anchors made changes but they didn’t make the impact desired and West increasingly looked the more likely to break the deadlock as Stockton pushed hard for a breakthrough.

A free kick from Donaghey went inches wide and he along with most of the crowd though it’d actually gone in when it ran across the back of the net. They didnt have to wait long though and it was full back THOMPSON raiding down the right again who linked with Hayton and slipped the ball past Roberts to make it 1-0 on 80 minutes.

Stockton gave it a go in the last 10 minutes but West Allotment saw the game out pretty well and they progress to the knockout phase unbeaten, the Anchors need a favour added with a dollop of luck and will only go through if they win and Ashington draw with Ryton next Wednesday FT 0-1

Very disappointing to lose in the manner they did. West Allotment Celtic played well but they were allowed too much space and time to get into their stride. After reaching the semi-final the last two seasons it seems perhaps we’re not meant to be in the League Cup competition this season and that’s two disappointing Wednesday evening’s in a row. Big game on Saturday and an opportunity to bring a smile back to peoples faces by progressing in the FA Vase in what should be a very competitive game. Big following making the trip to Yorkshire too.