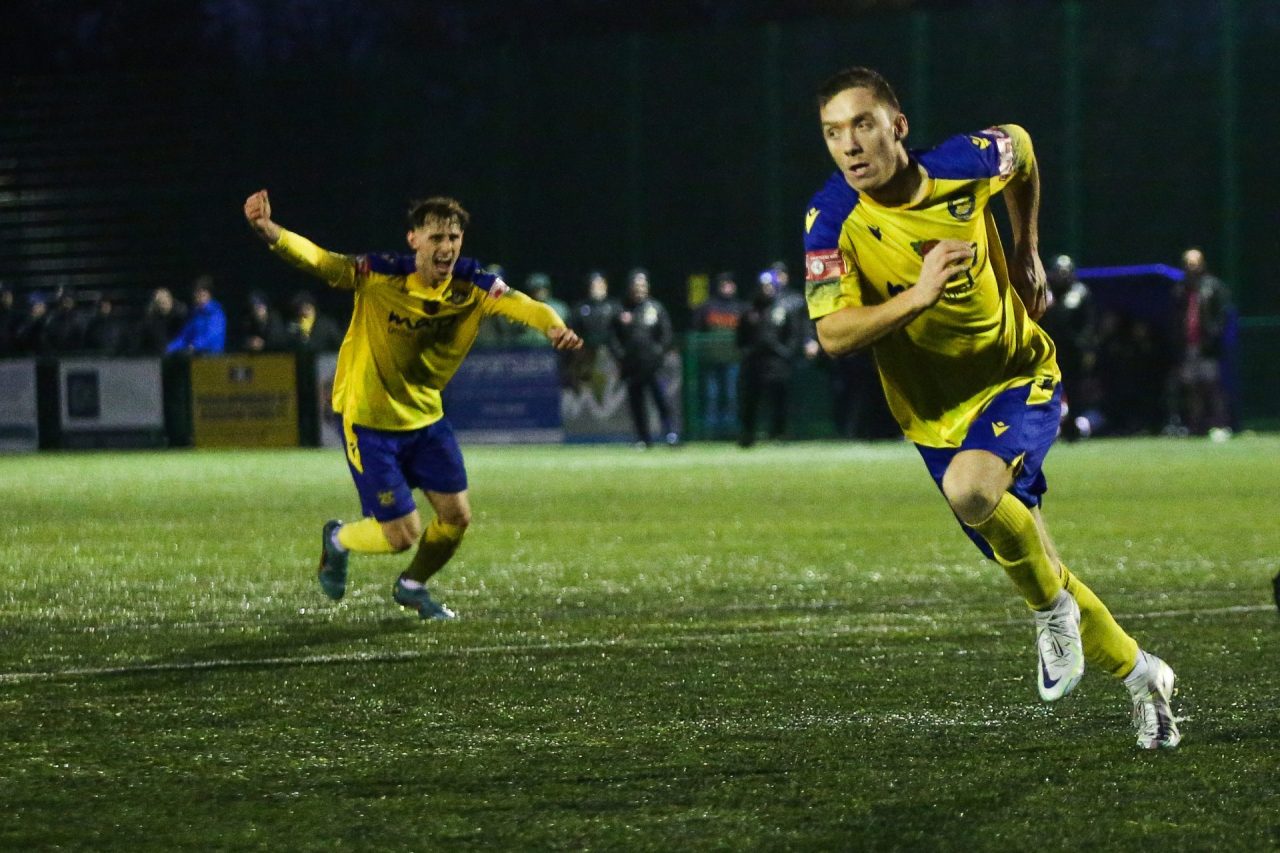 Kevin Hayes netted a brace as Stockton Town edged out a seven-goal thriller against Carlton Town.

Carlton Town held the lead at half-time after Niall Davie scored the half’s only goal.

Stockton Town turned the game in their favour when substitute Liam Cooke levelled before Hayes scored a beauty and Adam Nicholson added a third with a header.

Carlton came back though when substitute Bradley Wells scored a six-minute brace to level the scores.

However, Stockton managed to find a winner when they were awarded a penalty after Hayes’s cross into the box was handled. Hayes then stepped up and coolly slotted home to give the home side a big three points.

Stockton Town came into the game on the back of 2-0 win at Brighouse Town last Saturday which had extended their lead at the top to four points.

Manager Michael Dunwell named one change to the starting line-up with Glen Butterworth coming in to make his first start for the club.

The Anchors started the game brightly as Hayes forced an early save from Carlton Town goalkeeper Michael Emery.

Butterworth then went close with a strike just wide of the post from outside the area.

Five minutes later he went close again with another effort just wide of the post after Dan McWilliams had played it back to him.

Elliott Beddow then had a chance when Stephen Thompson threaded the ball through to him but he was unable to find the target on the turn.

Thompson was again involved as found Hayes who struck his shot straight at Emery.

Carlton Town had their first opportunity when a ball came all the way across to Kyle Dixon but he was soon closed down by Callum Roberts who denied him.

Carlton opened the scoring when Davie ghosted in to convert inside the six-yard box.

Stockton tried to answer back immediately when Hayes fired a shot from 20-yards narrowly wide of the post.

The visitors could have doubled their when Stewart Lawrence put in an inviting cross, but it marginally evaded the head of Opoke.

Butterworth continued in the same vein as he struck a shot from outside the box that stung the palms of Emery.

Shortly before half-time, the Anchors were enforced into a change after Callum Roberts was forced off following a collision with Opoku. The Stockton bench were convinced of a red card, but the referee gave the striker a yellow.

Without a substitute goalkeeper on the bench, Stockton were forced to put forward Mikey Roberts in goal.

The Anchors began the second half searching for an equaliser. The first big chance fell when Thompson sliced wide after the ball was pulled back to him by Hayes.

They did not have wait long until their equaliser though when substitute Cooke struck into the corner after neat work just outside the Carlton box saw Thompson find him in a pocket of space.

It was a quick turnaround as four minutes later, Stockton had the lead when Hayes picked the ball up in a tight angle before he fired an unbelievable shot into the top corner.

Stockton then had a third when Butterworth put in a superb corner which was emphatically headed home by Captain Nicholson.

The visitors responded to going two goals behind when substitute Wells scored after profiting on a mix-up in the Stockton defence.

They were made to rue that when Carlton levelled after Wells again took advantage of a loose ball.

Undeterred by Carlton’s sucker punch, Stockton came back with chances. First Hayes hit the side netting with a close-range effort. Then Butterworth had a shot inside the box which agonisingly rolled across the face of goal.

With five minutes remaining, the Anchors were given a huge opportunity to regain the lead when they were awarded a penalty after Hayes’s cross struck a hand. Hayes, despite not a usual penalty taker, coolly converted to give Stockton the lead.

In stoppage time he almost completed a hattrick when he was played through but his shot was saved by Emery.

Stockton finally got over the line when a free-kick midway in their half was gathered by make-shift goalkeeper Mikey Roberts.

The victory means Stockton Town now hold a seven-point gap over Hebburn Town in second. Next week is a trip to Tadcaster Albion.