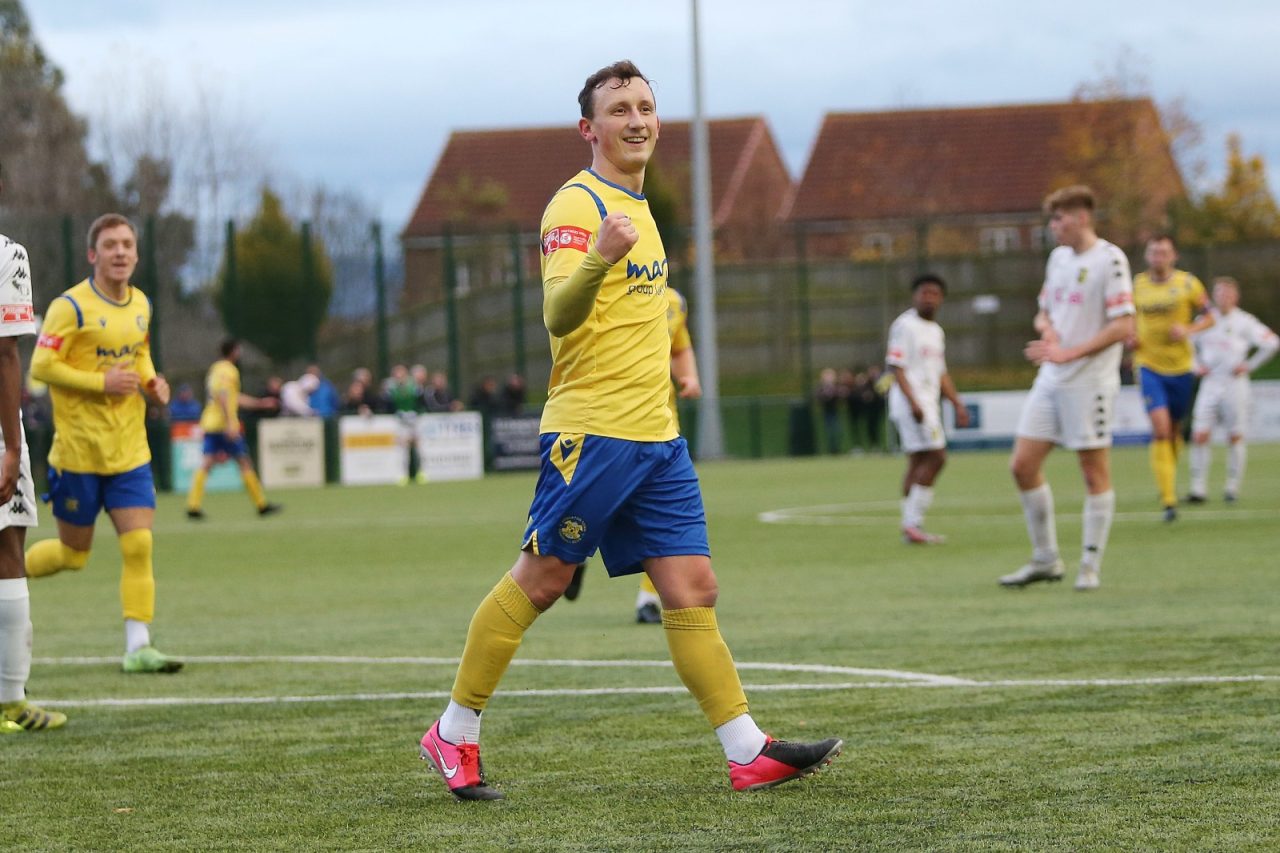 Forward Mikey Roberts has described his current form as the best he has experienced in the last couple of years.

The 29-year-old has scored six goals and provided two assists in his last half a dozen matches, including a goal and assist on Saturday to help the Anchors breeze past Tadcaster Albion.

Roberts is Stockton’s top scorer this season with nine goals from 19 matches, and has taken his tally for the club up to 49, just one away from the magical 50 mark.

The forward began his goalscoring streak with a brace against Pickering Town as the Anchors came from behind that day to defeat The Pikes and has returned goals in five of his last six games.

Whilst Roberts is enjoying his current run of form in the team, he says the club is a “good place to be” at this time and wants to win more games, even if it means the goals dry up for the forward.

He said: “I’m on a purple patch at the minute, there’ll be spells where I’m not scoring as well and there were a couple of big penalties that have helped.

“I’m confident going into games at the minute, I feel like I’m playing well and the team is playing well. It’s a good place to be right now.

“I wouldn’t say this is the best form of my career but it is the best I’ve experienced in the past couple of years.

“As I’ve gotten older and playing more of a wider role now”, he continued. “I’ve had to adapt a little bit and whilst it’s not the best run of form I’ve ever had, it will be up there if I can keep this up then come back to me in a couple of months.

He went on to say: “It would be nice to hit the 50 mark but first and foremost it’s all about us scoring as a team and winning games.

“If we’re winning games but I’m not scoring I don’t mind, I’d rather be winning them games.”

Stockton returned to winning ways last time out with a convincing victory against Tadcaster, scoring four unanswered goals to record their biggest home victory of the season and largest margin of victory in a home league game since the 7-1 victory over Seaham Red Star in October 2020.

Roberts has described the performance as arguably the “most complete” of the campaign so far and claims that the margin of victory had been coming from the side all season.

He said: “I’d say it was the most complete performance we’ve had so far this season. We had a bit of a slow start in the first ten minutes or so, but after that we found our feet and we really grew into the game and just got stronger and stronger as the match went on.

“We’ve had a big emphasis on taking our chances and we did that on Saturday which was good to see and it brought us a convincing win.

“I said earlier in the season that a team was going to get it [a thrashing] from us at some point this season because we were playing well but just not finishing those big chances. Tadcaster arguably got that from us on Saturday, and we probably could have scored a few more.”

Michael Dunwell’s side scored three times in the opening half-an-hour, youngster Alfie Conway opening the scoring in the ninth minute with a delicate finish from Tom Coulthard’s exquisite defence splitting through ball.

Roberts earned the Anchors a penalty and stepped up to convert before turning provider for Dan McWilliams’ first goal of the season to give the home side a three goal lead after 32 minutes.

The 29-year-old described the opening stages on Saturday as the “perfect start” and has laid praise on A. Conway for the positive influence he has brought to the side, describing him as “frightening” for his age.

“It was definitely the perfect start,” he said.

“Alfie is frightening that at 16-years-old he’s absolutely fantastic at what he brings to the team. You wouldn’t look from the outside and think he’s only 16 and us as players we forget he’s 16 because of how good he is when he turns it on like that.

“He brought us something different on Saturday and getting that early goal set us on our way and we took another two chances within the first half-an-hour and it settled us. We looked really comfortable from then on and the second-half was all about game management and we managed it really well.”

Stockton have lost just one of their last seven league games, a run dating back to the 3-0 win against North-East rivals Dunston, the sole reverse coming against league-leaders Liversedge in October.

Dunwell’s men bounced back from that defeat by thrashing Lincoln United 5-0 at Ashby Avenue before being held to two draws in two games against Yorkshire Amateur and Sheffield FC.

Despite the frustration at not picking up maximum points from the last two games, Roberts states it is testament to the quality and steel in the squad that the Anchors will fight to the very end to pick up maximum points.

“I thought the Lincoln game was the start of a run of games that we’d said we’d go on and pick up quite a lot of points and climb that league table, which is no disrespect to the teams that we were playing.

“We had that brilliant win against Lincoln but then we had two disappointing performances as well as results.

“We didn’t deserve anything out of the Yorkshire Amateur game in my opinion but it proved the steel we’ve got within the club and the players that we want to win games and we go right until the very end.

“In the Sheffield game, he continued. There was only one team that wanted to win that game and unfortunately we just couldn’t break the deadlock that night.”

After Saturday’s game against Pontefract Collieries, the Anchors head into a busy four week period which sees Stockton play six games in the space of 28 days, starting against Brighouse Town at The MAP Group UK Stadium on December 4th.

The 29-year-old says the players like the festive period as there’s always a game round the corner to continue, or reverse, current form.

He said: “In football, the good thing about it is there’s always another game round the corner and the Christmas period is no better time for that.

“You get a chance to keep up your form if you’re putting in good performances and your team is on form or you can put your wrong’s right just a couple of days later.

“The fact they’re all derbies in and around that time with Marske, Shildon and Hebburn, anything can happen in those games. It’ll be good to go at it and the lads will look forward to it and look to get three points from every game.”

Stockton Town partner with Her Game Too campaign