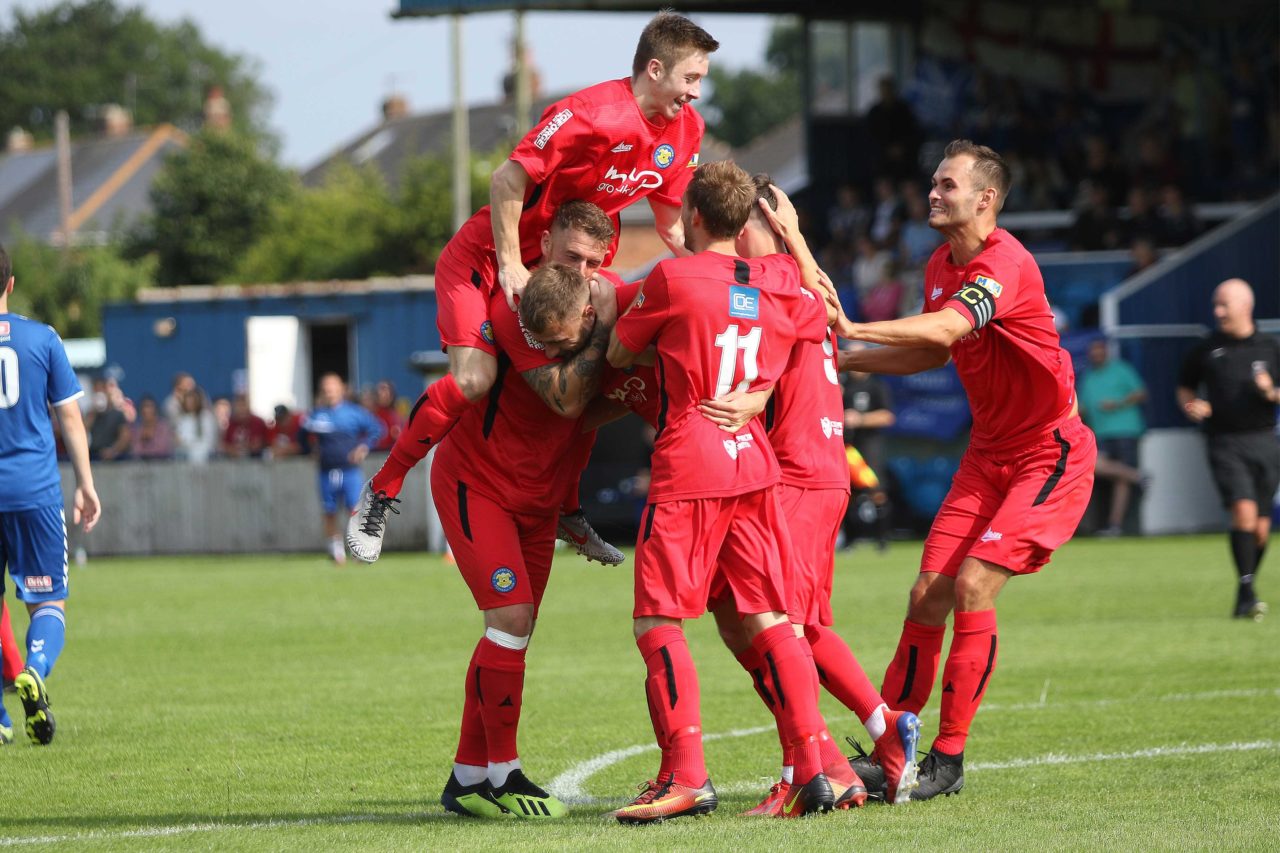 Stockton Town made an early statement of intent for the campaign ahead with a 6-0 dismissal of  Division Two champions Billingham Town at Bedford Terrace.

They say you only get one chance to make a first impression and The Anchors certainly achieved that in the season curtain raiser as a Kevin Hayes brace along with goals from Peter Bulmer, Max Craggs, Jordan Robinson and Adam Nicholson secured a win which will capture the attention of the rest of the division.

Stockton were in truly scintillating form and played some wonderful football at times. The new midfield duo of Robinson and Tom Portas linked play up well and some of The Anchors’ passing moves were a joy to behold. Debutant full backs Lewis King and Dan McWilliams caught the eye as Stockton were at times irresistible from wide areas. 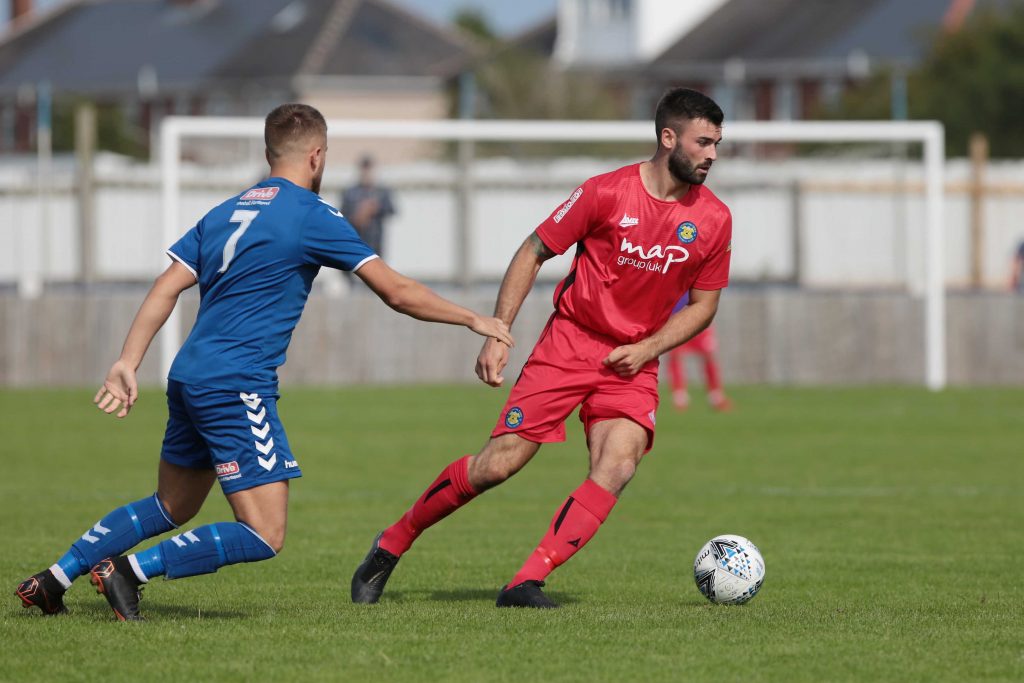 The nature of the Stockton dominance is outlined by a scoreline that in truth could have been even higher with two misses from the penalty spot, three shots cannoning into the woodwork and home goalkeeper Lewis McDonald pulling off a string of impressive saves.

Despite this, it was the hosts who had the best chance of the game’s opening moments. A long ball seemed to elude Stockton’s defence and Town managed to work a shooting opportunity for Elliott Beddow. He looked to arc the ball around debutant Anchors stopper Callum Roberts but in doing so, sent his effort wide of the post. 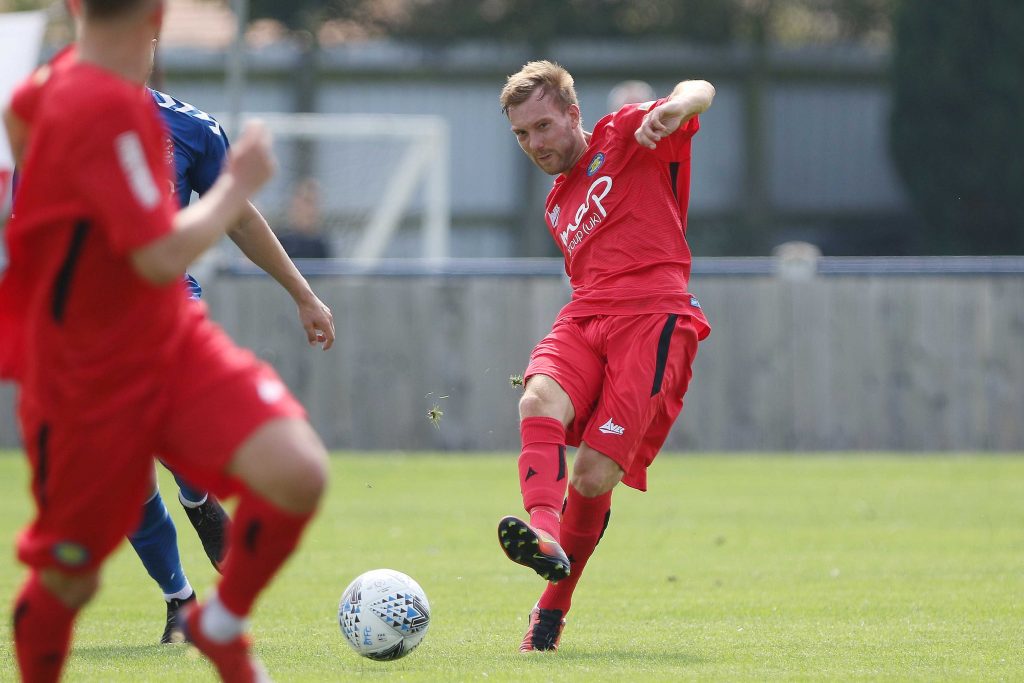 It would prove to be Billingham’s best opportunity of the contest and soon after they were behind. The Anchors offered the first glimpse of the slick passing that would prove to be the hallmark of their performance and they released Fred Woodhouse down the left. He pulled the ball back to Bulmer who composed himself and finished past McDonald to open the account for the season inside ten minutes. 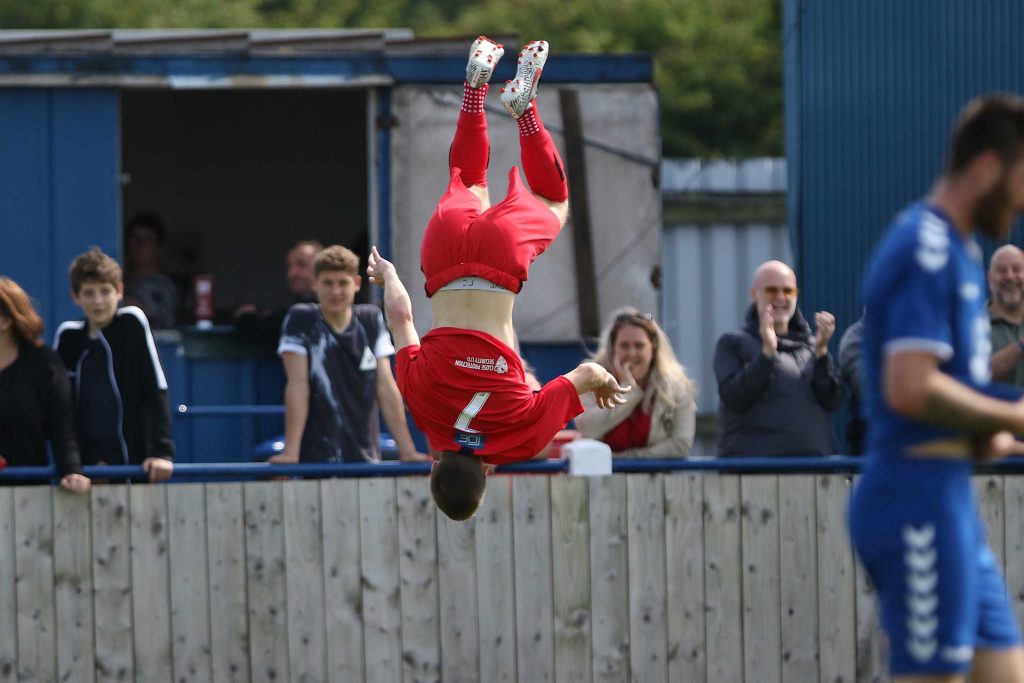 One became two on 21 minutes and this time the goal would come from the opposite wing. After Billingham failed to deal with a Stockton corner, they could only clear the ball to Hayes. He cut in from the right and curled a low left-footed drive beyond McDonald and into the bottom corner. 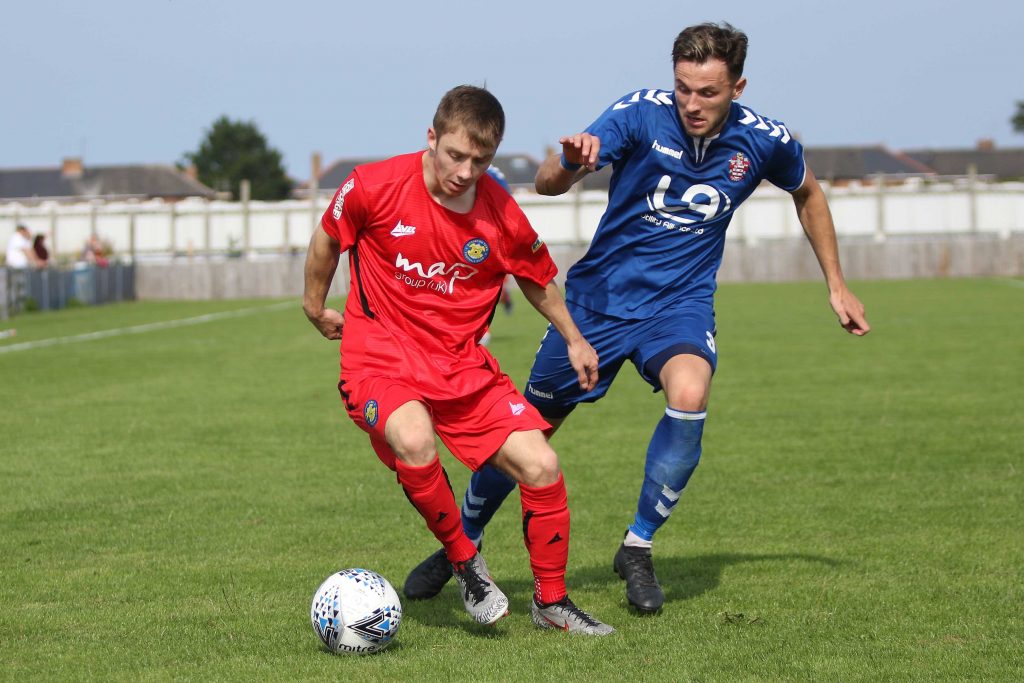 Seven minutes later, the visitors should have been out of sight as the referee pointed to the spot after Robinson was tripped by Dunlavey in the area. Mikey Roberts stepped up but his penalty was denied by McDonald diving low to his left.

Stockton would continue to enjoy the lion’s share of possession but the goal to truly kill off Billingham eluded them as the half drew to a close. If fans thought they’d had value for money in the first 45 minutes, it proved to be a mere hors d’oeuvre ahead of what Stockton would be serving up in the second half.

The game looked beyond the home side three minutes after the restart when the referee again pointed to the spot and reduced Town to ten men. A Roberts header was goalbound before Kris Summers handled on the line. He received his marching orders and Roberts bravely stepped up looking to make amends. He looked to double bluff McDonald by going back to his left but the Billingham keeper again stooped to save well. 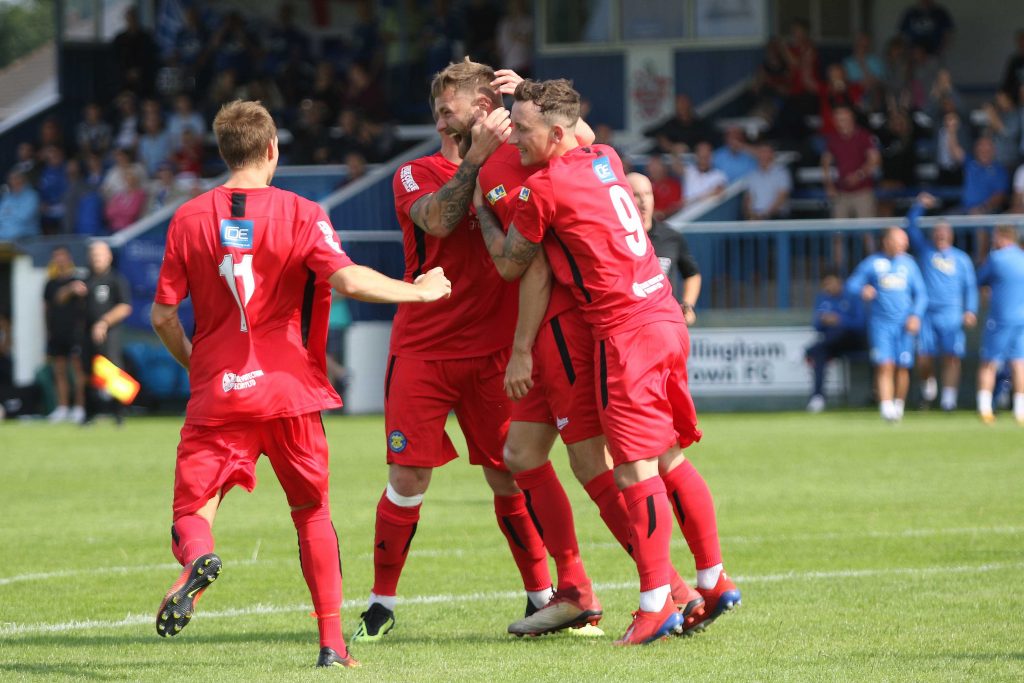 The third goal finally came in the 51st minute and after all of Stockton’s impressive football, it would prove to be a goal that came in bizarre fashion. Billingham scrambled to clear a corner again but in their panic they could only fire an attempted clearance into Robinson. The ball ricocheted off the Stockton midfielder and beyond McDonald into the net.

The Anchors were in cruise control but a rush of blood to the head from Callum Roberts levelled up the numbers. The ‘keeper came flying out of his area looking to sweep up a Billingham break but in doing so badly mistimed a challenge on Beddow before the referee brought his debut to a premature end. With Michael Arthur not named on the bench, Mikey Roberts volunteered to deputise for his namesake and he would go on to keep a clean sheet without ever being truly tested.

The long delay whilst Beddow received treatment caused the game to slip into a brief lull before Stockton lit the blue touch paper and scored some sensational goals in the closing quarter of an hour. First, Hayes unleashed another stunning left-footed strike from range that once again left McDonald helpless as the ball found the net for Stockton’s fourth. 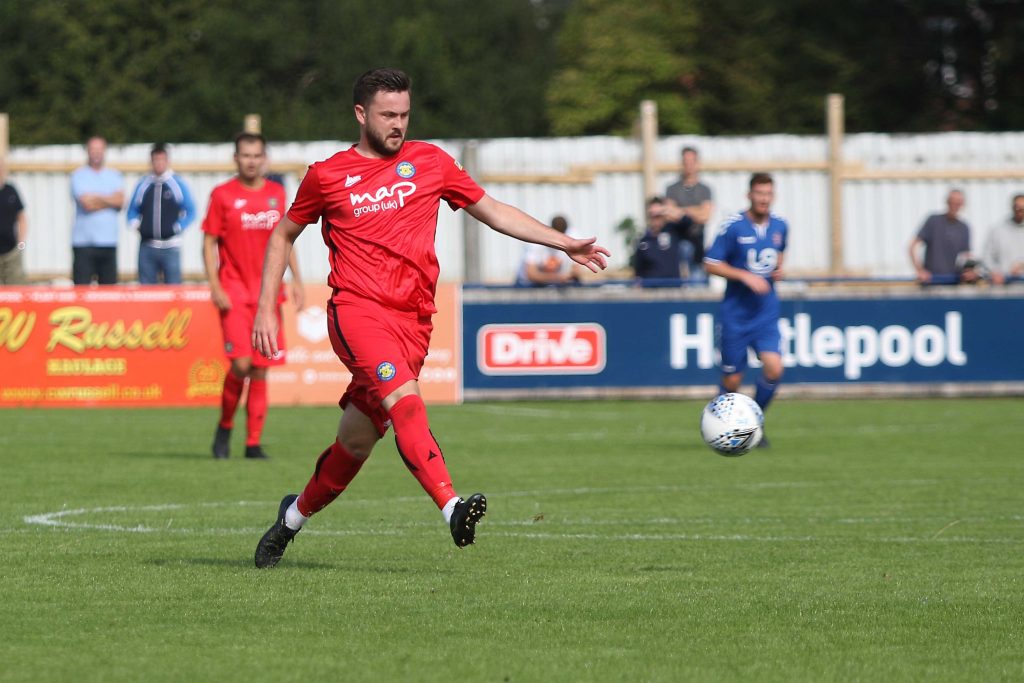 The fifth came ten minutes from time as Max Craggs did what Max Craggs does. He curled a 25 yard free kick over the wall and into the top corner with McDonald clawing at thin air. Another scrapbook goal from a player whose set-piece reputation is already burgeoning.

Stockton pushed for a sixth and substitute Jamie Owens looked the most likely outlet. He was twice denied by McDonald and once by the post as a goal on his return looked destined to elude him. The sixth eventually came three minutes into the 16 minutes added on due to Beddow’s injury. Craggs was again involved and he crossed to the back post. His cross found Tom Coulthard who headed back across the face of goal to his central defensive partner Nicholson. The captain made no mistake with a simple header into the net. 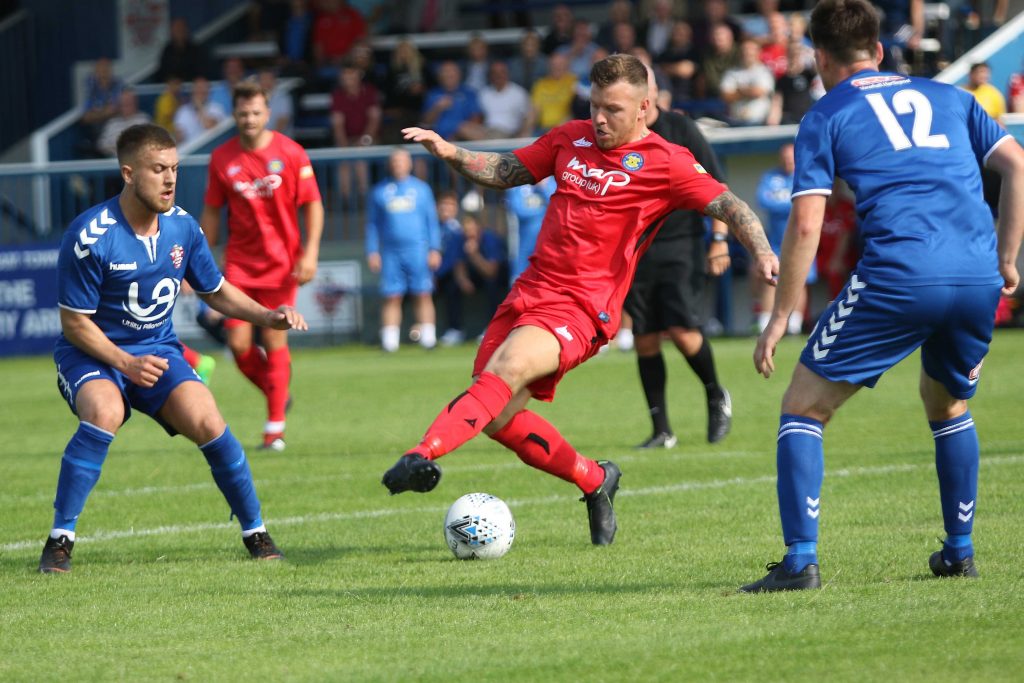 This was simply an all round performance that will make the division’s leading contenders take note. If Anchors fans started the day with a fire of expectation burning inside them, this performance will have done little to quell that. Rather, this display shows what Michael Dunwell’s side are capable of this season. It was captivating, at times beguiling, but with a clinical and ruthless edge in the final third. Football is quite definitely back, and so are The Anchors, better than ever.