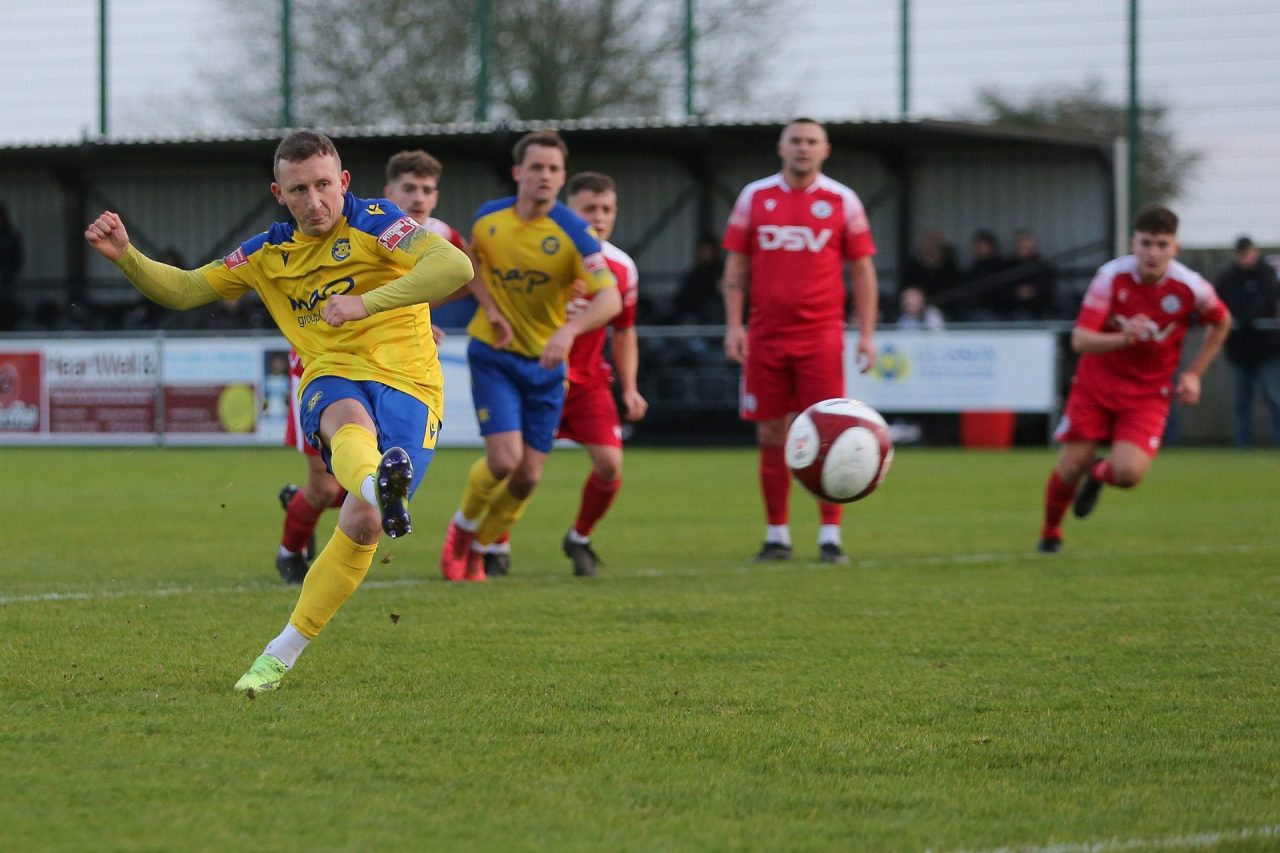 Mikey Roberts scored a penalty as Stockton Town were held to a draw at Grimsby Borough.

The Anchors fell behind inside two minutes as Adam Drury found space to rifle a shot into the far corner.

Stockton were level inside ten minutes of the goal for a push in the box and Mikey Roberts stepped up to fire his penalty into the corner.

The visitors were on the front foot for the vast majority of the second-half, but somehow couldn’t find a winner through a variation of crossbar, post and clearances on the line.

Grimsby Borough got off to a great start as Adam Drury fired the hosts in front after just 74 seconds.

Stockton responded well with Stephen Thompson having a shot blocked after Adam Nicholson brought the ball out of the defence.

The Anchors were given an opportunity to level the scores following a foul inside the Grimsby box from a corner.

Mikey Roberts stepped up and slotted his penalty into the corner.

Glen Butterworth whipped a corner into the box which was headed back by Adam Nicholson and Louie Hall’s follow up was somehow cleared off the line.

Patrick Boyes then produced a brilliant, instinctive save to keep the Anchors level from Drury’s shot.

Boyes was on hand again to keep Drury out with another superb save.

It was the hosts who ended the first-half the stronger of the two sides, with a flurry of crosses coming into the Stockton area, which were cleared.

The first opportunity of the second-half came just seconds following the restart, Butterworth’s volleyed cross-shot was inches away from Elliott Beddow.

Stephen Thompson was played in by Mikey Roberts and he shot just wide of the goal.

Mikey Roberts again went close as he forced a great save from Liam Higton with a fierce shot from 18-yards.

Cameron Painter was introduced with ten minutes to play and he almost made an immediate impacy as he hit the crossbar with a fizzing shot from just outside the penalty box.

There were six minutes added in the second-half and the Anchors almost won it at the death as Adam Nicholson’s header was cleared off the line in a dramatic melee.

Michael Dunwell’s side are next in action on Saturday 3rd December against Long Eaton United at the MAP Group UK Stadium.