Stockton Town took the first step on the road to a dream Wembley return with a 4-0 victory over Ashington at the Coverall Stadium in the first qualifying round of the FA Vase.

The Anchors turned in a stunning second half display to blow Ashington away after the visitors had frustrated the men in yellow with a resolute defensive display in the opening 45 minutes.

Kevin Hayes continued his impressive start to the season by finding the net twice as goals from Jordan Robinson and Jamie Owens rounded off the scoring to secure Stockton’s safe passage into the next round.

Michael Dunwell made one change to the side that beat Thornaby on Bank Holiday Monday with captain Adam Nicholson returning the the starting lineup in place of Nathan Mulligan and Jordan Robinson moving back into his usual midfield berth.

Stockton came flying out of the traps and signaled their intent from the first whistle. A neat passing interchange released Lewis King down the right and he worked his way past Ashington left back Marc Lancaster. King sent a low cross into the middle that found Fred Woodhouse but his strike was straight at Adam McHugh.

The visitors were proving to be incredibly organised and difficult to break down in the early going and fired a warning shot about their threat on the counter on the quarter hour mark. They worked the ball into Dan Taggart and he turned well before sending a looping effort goalwards. His shot had Callum Roberts worried momentarily but the Stockton goalkeeper moved his feet quickly and saved comfortably.

Stockton were enjoying long spells of possession but were unable to find a way through the organised defensive shape of the visitors. Their most promising sight of goal came on 23 minutes when they worked the ball from the left into the feet of Tom Portas on the edge of the Ashington box. His shot was well struck but didn’t have the direction as it went the wrong side of McHugh’s right-hand upright.

It would be the closest Stockton would come in the first 45 as the Colliers’ shape restricted the home side to strikes from range. The Anchors thought they had finally found the way through eight minutes before the interval when Owens had the ball in the back of the net however his celebrations were cut short, with the referee adjudging the Stockton man of having kicked the ball out of McHugh’s hands in what seemed like a harsh decision.

If Stockton went into the half time break frustrated, they didn’t have to wait long to put their ire behind them. Within a minute of the restart, the Anchors had found the way through and the goal came in a familiar guise. Not for the first time this season, Hayes gathered the ball on the right before cutting in field with a lateral run and shooting left-footed from range. His low drive wrong-footed McHugh and nestled into the bottom left corner to give the home side the lead.

The lead was doubled just five minutes later. Ashington seemed to switch off from an Anchors corner, which was taken short. King had an abundance of time to pick out his man and cross. His delivery to the back post found Robinson unmarked and unwilling to pass up such a simple opportunity as he headed the ball past McHugh and into the net for his side’s second.

There was a swagger and a confidence about Stockton as they began to totally dominate proceedings. A third came on the hour mark and it was a wonderfully worked team goal. Hayes was a constant thorn in the Ashington side and at the heart of much of the Anchors’ attacking play. He slid a through ball between Coppen and Lancaster that played Robinson to the byline. He pulled the ball back to Owens and the forward finished in typical clinical fashion from close range.

Stockton were carving the visitors open at will and an inevitable fourth came 15 minutes from time from a similarly inevitable source. Mikey Roberts thought he’d scored his side’s fourth but saw his celebrations cut short by the assistant’s flag. Ashington made a mess of the resulting free kick and Hayes caught Lancaster in possession before drilling the ball low past McHugh.

Stockton could have had a fifth three minutes into stoppage time as Mulligan and James Risbrough raced clear on the counter attack. Mulligan tried his luck at goal and beat McHugh but saw his effort cleared off the line to deny him a fourth goal in three games. 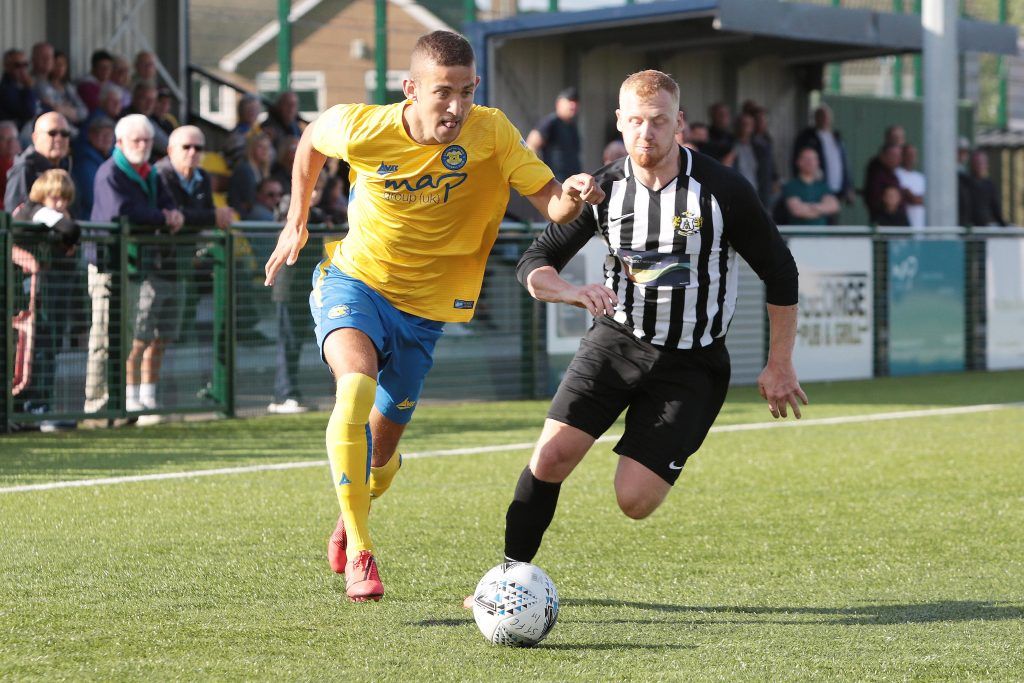 The win stretches Stockton’s unbeaten start to the season to eight games and marks a fourth consecutive clean sheet for Michael Dunwell’s side. You have to be in it to win it and fans can dare to dream for one round more thanks to another resounding Anchors win.