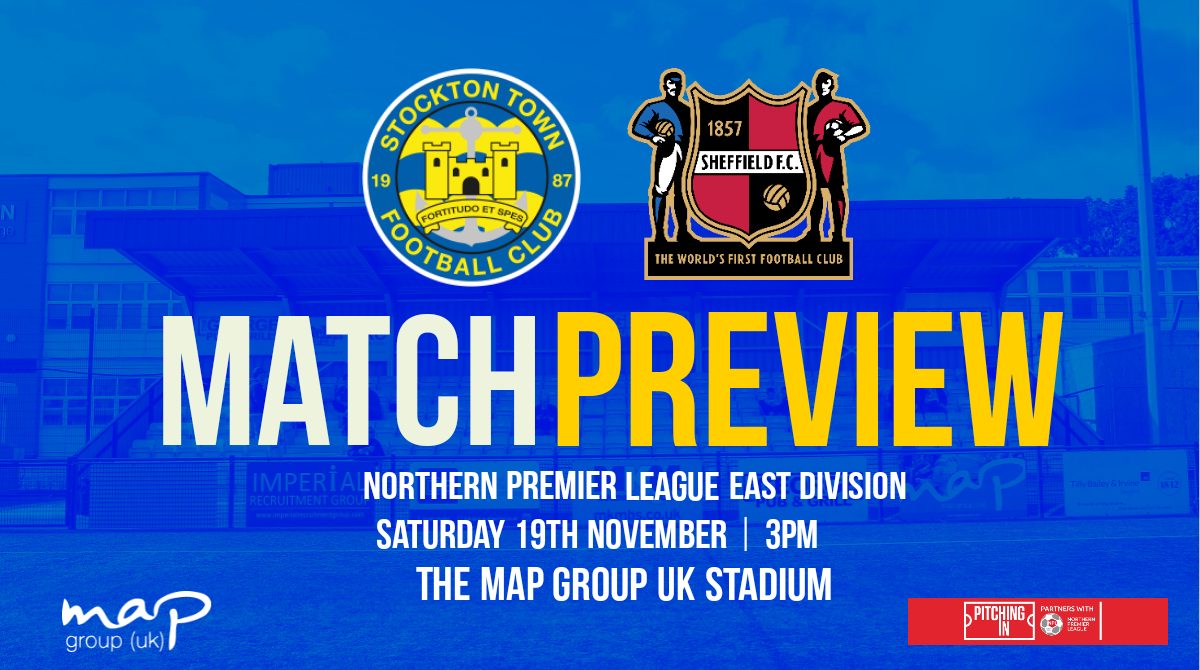 Stockton Town return to home action this Saturday when they host the ‘World’s First’ Sheffield FC.

The Anchors have had longer to prepare for this game after their midweek Durham Challenge Cup tie at Sunderland RCA was postponed due to the persistent rain.

They come into in a good run of form after securing four successive victories. The latest of which was a 2-0 win over Tadcaster Albion in which deputy goalkeeper Lewis McDonald made a crucial penalty save to keep the game scoreless early on.

Liam Cooke opened the scoring with a belting goal shortly before halftime, and in the second half Captain Adam Nicholson added a second. Both were on the scoresheet in consecutive games after netting in the 4-3 thrilling win over Carlton Town in the previous home game.

It has been a perfect response to a small blip Stockton suffered during mid-October when they lost back-to-back games to Dunston UTS at home and then on their travels at Pontefract Collieries.

Last season saw the two clubs meet for the first time. Both games ended in a draw.

Sheffield FC are 9th in the Northern Premier League East Division after taking 20 points from their first 14 games of the season.

Manager Ryan Cresswell has recently celebrated a year at the helm. Last season he kept the club at Step Four by avoiding relegation by three points.

This season appears to be much more promising for Sheffield FC. They may have scope to potentially eye the Play-Off places as they currently sit just four points off with two games in hand.

Summer signing Connor Cutts has made a strong impact since making the step up from Maltby Main. The midfielder has bagged five goals for the club. That makes him the joint-top goalscorer with defender Reece Fielding who also has five.

Strikers Nathan Modest and Marc Newsham who both scored in the 3-3 draw back in February are still with the club. Modest has four goals thus far, while Newsham has three.

“It will be another tough game. They have had a lot of changes this season as have a lot of teams in that area where you look and it’s bit like in the North East where players tend to move around to similar teams, they have done that as well.

“We are at home so we’re always confident that we can get the ball down and play in the right areas and win. We have just got to keep this run going.”