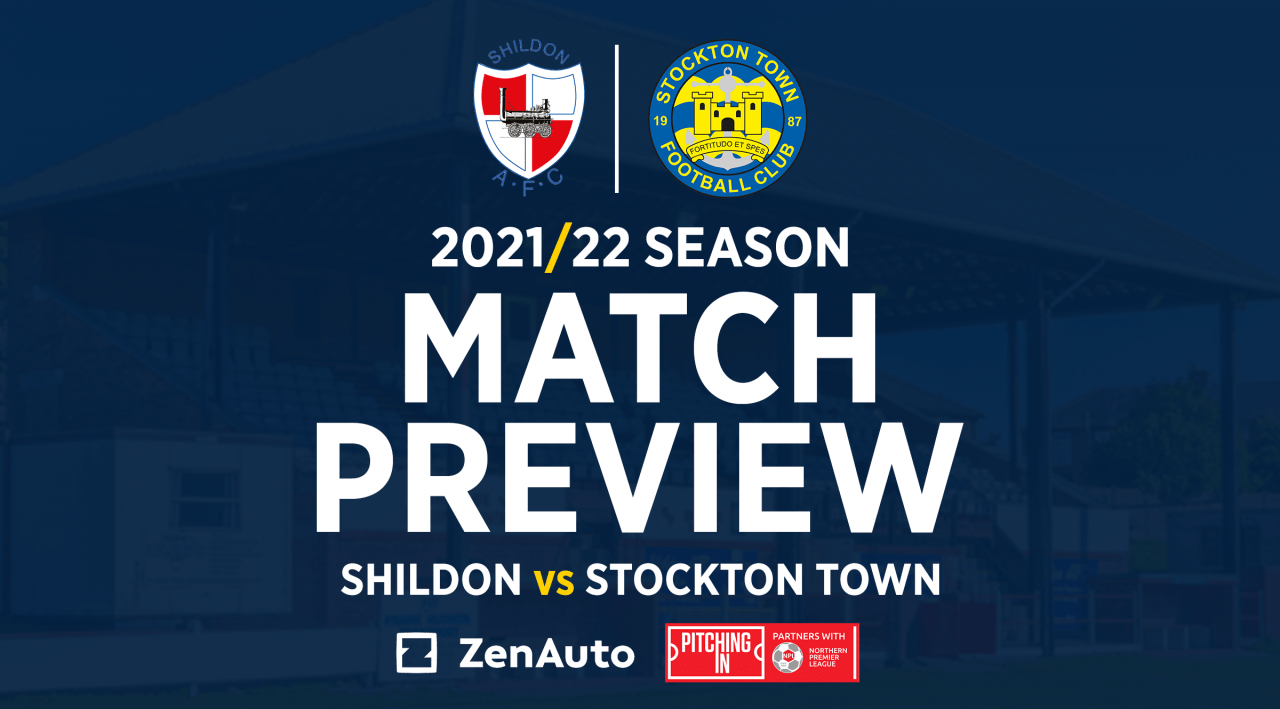 Stockton Town make the short journey to Shildon on Monday for the second instalment of the August Bank Holiday double-header.

The Anchors suffered defeat at home in a league match on Saturday for the first time since April 2019, some 875 days ago, going down 1-0 to a stubborn Worksop Town side on a frustrating afternoon at The MAP Group UK Stadium.

Michael Dunwell’s side were unlucky not to earn a point late on, with both Adam Nicholson and Tom Coulthard agonisingly striking both posts inside the final five minutes.

Attention now turns to a bumper clash in County Durham against a side Stockton faced in the league and two cup competitions last season, sharing the spoils with one win apiece and a goalless draw in the Northern League.

Stockton and Shildon have met ten times in all competitions in total, all meetings have been within the last four years.

Shildon are one of a few clubs to hold a winning record over the Anchors, however, Stockton have won three of the last five meetings between the two sides

Here are the results of the last five outings:

Shildon, like the Anchors, are playing at Step 4 for the first time this season following their promotion from the Northern League over the summer.

The six-time Northern League champions were placed third in the table across the two combined 2019/20 and 2020/21 seasons, behind Stockton and Hebburn Town.

The Railwaymen have made a flawless start to the season, with five wins from five games across the Northern Premier League and Emirates FA Cup.

Daniel Moore’s side have beaten division rivals Pickering Town and Brighouse Town to progress to the First Qualifying Round of the FA Cup, while winning each of their opening three league games – including a 2-0 win at Dunston.

Shildon have retained the majority of the players from their promotion-winning side, with Jordan Lavery departing the club after limited game time due to injury.

Danny Craggs had also left the club, but returned in a playing/coaching capacity and scored a spectacular free-kick in the final minute against Brighouse in the FA Cup Preliminary Round.

Arguably the biggest of Shildon’s additions this summer is midfielder David Atkinson.

The Shildon-born midfielder has joined the Railwaymen from Darlington, he began his career at Middlesbrough and has had spells at Carlisle United, Blyth Spartans and has featured in the Europa League in the same IBV Vestmannaeyjar side as Stockton forward Jonathan Franks.

Shildon maintained their perfect start to the campaign with a last-minute winner at Cleethorpes Town on Saturday and after the game, assistant manager Mark Hudson previewed the game against the Anchors.

He said: “It will be a quick turnaround, I told the boys to look after themselves over the coming days.

“We’ve had a few run-ins with Stockton over the years, it will be a tough game because they’ve started pretty well this season.

“I think they’ll be up there towards the end of the season as they’re a very good team.”

Following Stockton’s 1-0 defeat on Saturday to Worksop Town, manager Michael Dunwell feels the side can’t get too down following the first loss of the season.

He said: “We can’t be too down, there’s gonna be defeats, it’s a very competitive league. Teams are going to beat each other on the day, anybody can beat anybody.

“It’s how you bounce back from it, we’ve had a good start with three wins and a draw before today. Let’s not get too down and we go again on Monday.”

Previewing the fixture at Dean Street, Dunwell says it will be another tough game against a good team in Shildon.

The manager continued: “It’s good that we’ve got another game to try and rectify the result, it’s going to be a tough game as Shildon have had a great start.

“It’s going to be tough, but we will go there and give it a good go.

“We should have a few players back on Monday. Dan McWilliams should be back, which will allow Shane [Henry] to move back into midfield.

“[Lewis] King is missing but a few of the young lads who were missing today will be back so we will take a strong squad to Shildon on Monday.”