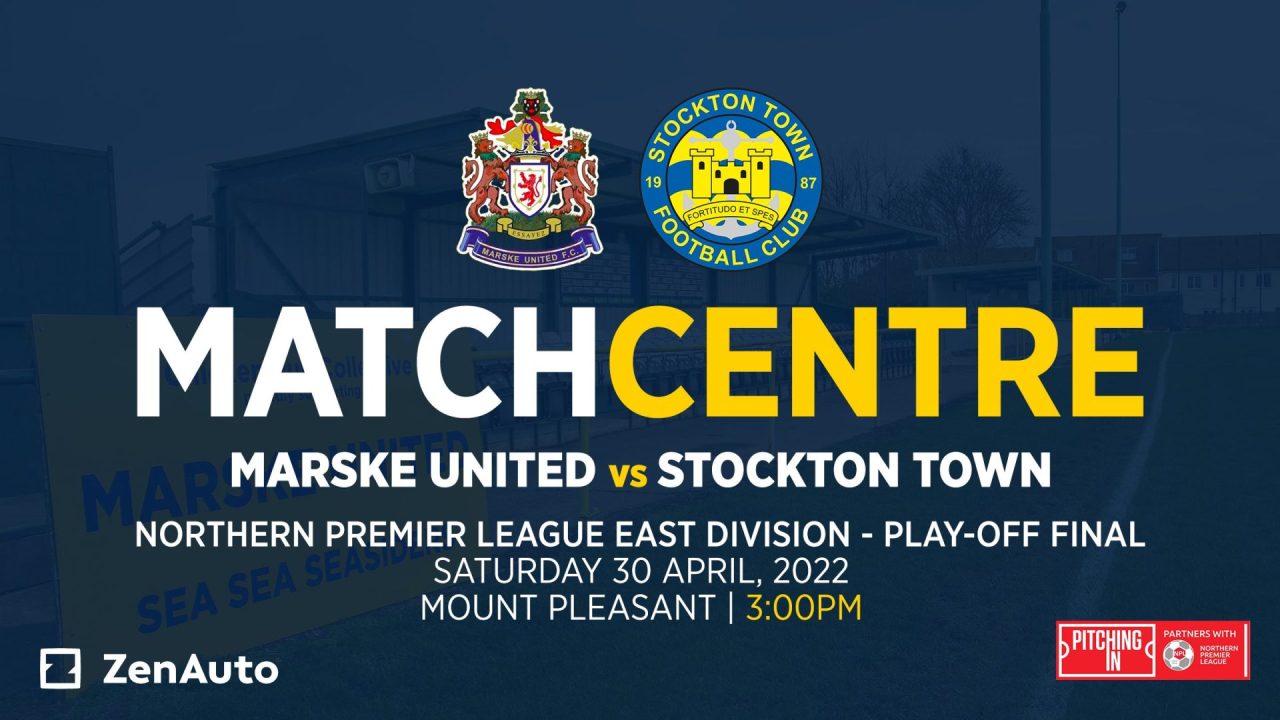 Stockton Town make the short journey to Marske United for one of the biggest games in the club’s history in the Northern Premier League East Division Play-Off Final.

The Anchors, backed by a large vocal support, won their Play-Off Semi-Final at Cleethorpes Town on Tuesday night.

First-half goals from Adam Nicholson and Kev Hayes proved to be decisive as the Stockton edged out the Owls 2-1 on the road.

Cleethorpes Town piled on the pressure throughout the second half but the Stockton rear-guard held up well, especially Callum Roberts who pulled off a string of important saves.

After winning their debut Play-Off game on Tuesday night, Stockton are now hoping for the fourth promotion in their history – a rise that thus far has seen them go from the Teesside League and Wearside League at Step Seven to a Play-Off Final to reach Step Three.

TALE OF THE TAPE

Marske United and Stockton Town have had six competitive meetings and have established a Teesside rivalry in that short space of time. In the two Bank Holiday fixtures this season, the pair played out two pulsating games.

Marske United battled for the Northern Premier East Division title throughout the season, but had to settle for the Play-Offs after losing out to Liversedge in the decisive title match.

They ended their regular with back-to-back draws with a late equaliser to seal a point in the last meeting with Stockton Town and a 1-1 draw at home to Ossett United on the final day.

On Tuesday night they won their first-ever Play-Off game by defeating Shildon 2-1.  Adam Boyes gave the Seasiders the lead before Dean Thexton forced extra-time for the visitors.

Former Middlesbrough midfielder Jason Kennedy sent Marske through to the final with the winner in the second half of extra-time.

Saturday is a sell-out and will see Marske United break their attendance record of 1,489 which was broken in February 2013 when they hosted Darlington in the Northern League.

Marske were the league’s second highest goalscorers with 94 in the regular season. Striker Adam Boyes was prolific throughout with 46 goals in all competitions. He netted the opener when the two sides met in December.

Matty Tymon also enjoyed a good season in front of goal with 20 goals in all competitions.

Others to watch for the hosts are long-term midfielders Craig Gott and Glen Butterworth who have been key part of their squad since the Northern League days.

Speaking ahead of the game, manager Michael Dunwell said: Obviously it is huge for the club. It is the highest level we have ever played at.

“It makes it a bit more spicy because we are playing Marske.

“The lads are still on a high after Tuesday (2-1 win at Cleethorpes Town) and hopefully they can take that into the game on Saturday and we can hopefully make the fans and the club proud and get a result.”