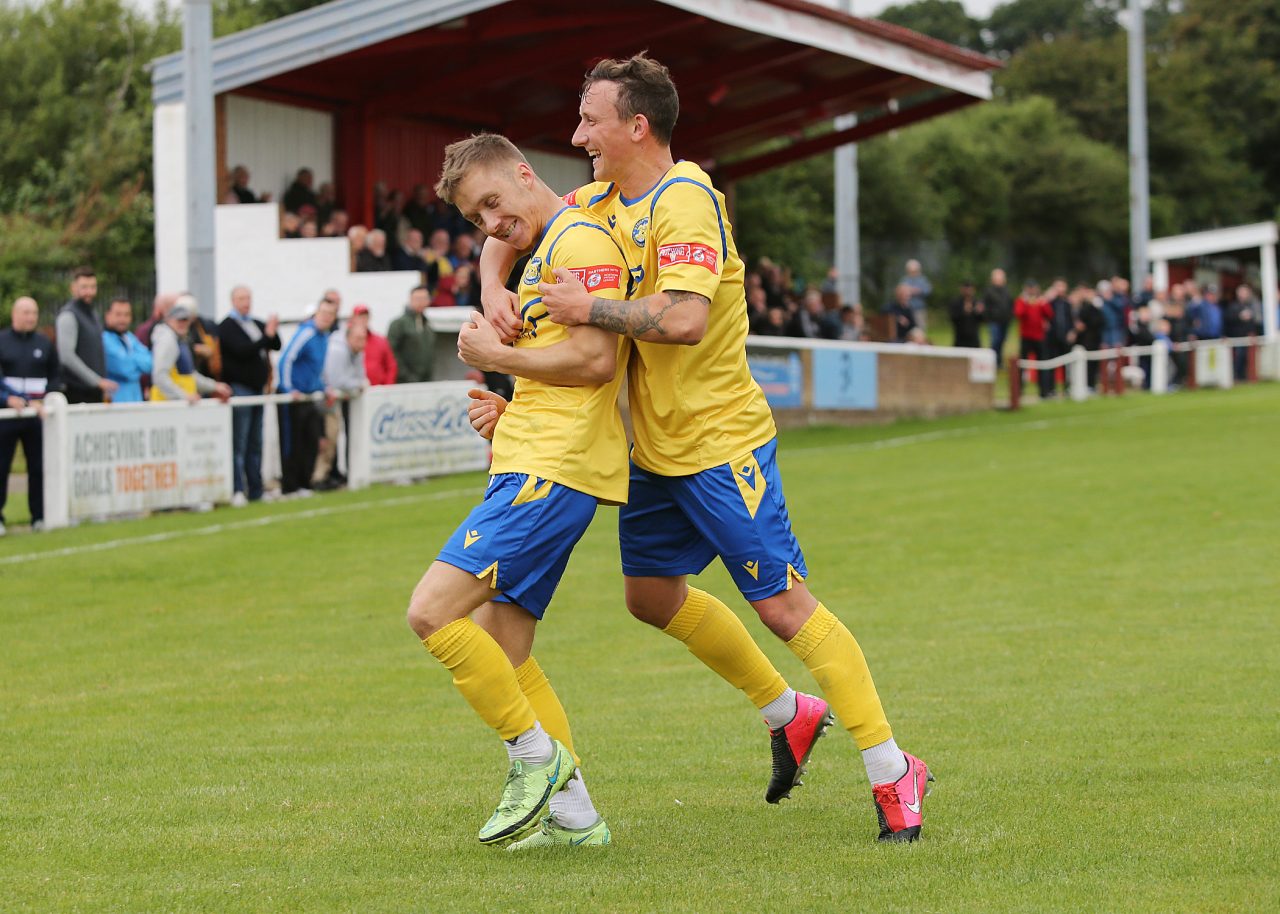 Kev Hayes was the star of the show as he scored twice and provided an assist to fire Stockton Town into the hat for the Second Qualifying Round of the FA Cup.

Hayes, Mikey Roberts and Nathan Steel were on the scoresheet as the Anchors returned to winning ways after two games without a win.

The result equals the Anchors best ever run in the competition, matching the cup run made during the 2019/20 competition, and marks just the second time Stockton have reached this stage.

Manager Michael Dunwell named an unchanged side to the one that drew at Shildon on Bank Holiday Monday.

The home side started the game on top and could have been ahead inside 60 seconds, frequent dangerman Taylor Richardson cut inside and saw his shot blocked by Dale Mulligan, before Pete Bulmer blocked an effort from Jonathan Carr.

Richardson was once again involved in the action just five minutes later, he got past Pete Bulmer and released a shot towards the bottom corner, but Callum Roberts got down to make a fine save at his near post.

The visitors got a foothold on the game and were close to taking an early lead, Tom Portas chipped a ball into the box, Adam Nicholson headed back across goal and Jamie Owens was denied from inside the six-yard box by a good save from Keaton Marrs.

Stockton did take the lead after 14 minutes, Mikey Roberts was brought down 20 yards from goal, Kev Hayes placed the ball down and curled a sumptuous free-kick around the RCA wall and into the far corner.

The Anchors began to assert themselves on the tie and went close to doubling their advantage on 21 minutes, Portas swung in a corner to Nicholson, the captain’s header was saved smartly and Mikey Roberts’ follow up effort was blocked.

Mikey Roberts was on the scoresheet just a minute later, Portas again involved in the action, the midfielder clipped a ball through to Hayes, who played forward to Owens, the forward spun and played across to Roberts who fired across goal at the first time of asking.

Sunderland RCA reduced the deficit just before the half-hour mark, a deep free-kick was floated into the penalty area and Michael Annang-Colquhoun scrambled the ball into the net.

Owens was close to putting the Anchors back in front, the forward couldn’t stretch to convert Nicholson’s cut-back, Portas also went close to scoring, the midfielder saw his shot saved at close range from Jonathan Franks’ cross.

RCA almost took the lead on the stroke of half-time, Richardson, who was a constant threat in the first half, swung in a cross which Mark Davison turned onto the crossbar.

The second half took time to come to life, with the visitors maintaining spells of possession to try and get back ahead in the game.

Stockton went close to doing just that 10 minutes into the half, Hayes with another moment of skill to beat his man and clip a ball across goal, M. Roberts pulled back for Owens but his effort was again blocked as RCA put their bodies on the line.

Portas, who was at the heart of everything in another stunning display, picked up the ball in midfield and went on a mazy run before playing through to Hayes, whose shot just went past the far post.

The Anchors finally regained the lead with 20 minutes to play, Portas took a quick free-kick to Hayes, who drove inside and lashed an effort across goal which found its way into the bottom corner.

Nathan Mulligan almost made an immediate impact as a substitute, his free-kick from 25 yards forced a good save from Keaton Marrs.

Nathan Steel scored his first goal of the campaign to wrap up the victory with just over five minutes to play, Hayes glided past his defender before firing a low cross across goal for Steel to slide home.

Portas almost added late gloss to the scoreline, Hayes’s cross was taken down by the midfielder who was denied by a combination of the post and goalkeeper.

Callum Roberts denied RCA any route back into the contest, he made a smart save to deny Best’s effort from outside the penalty box.