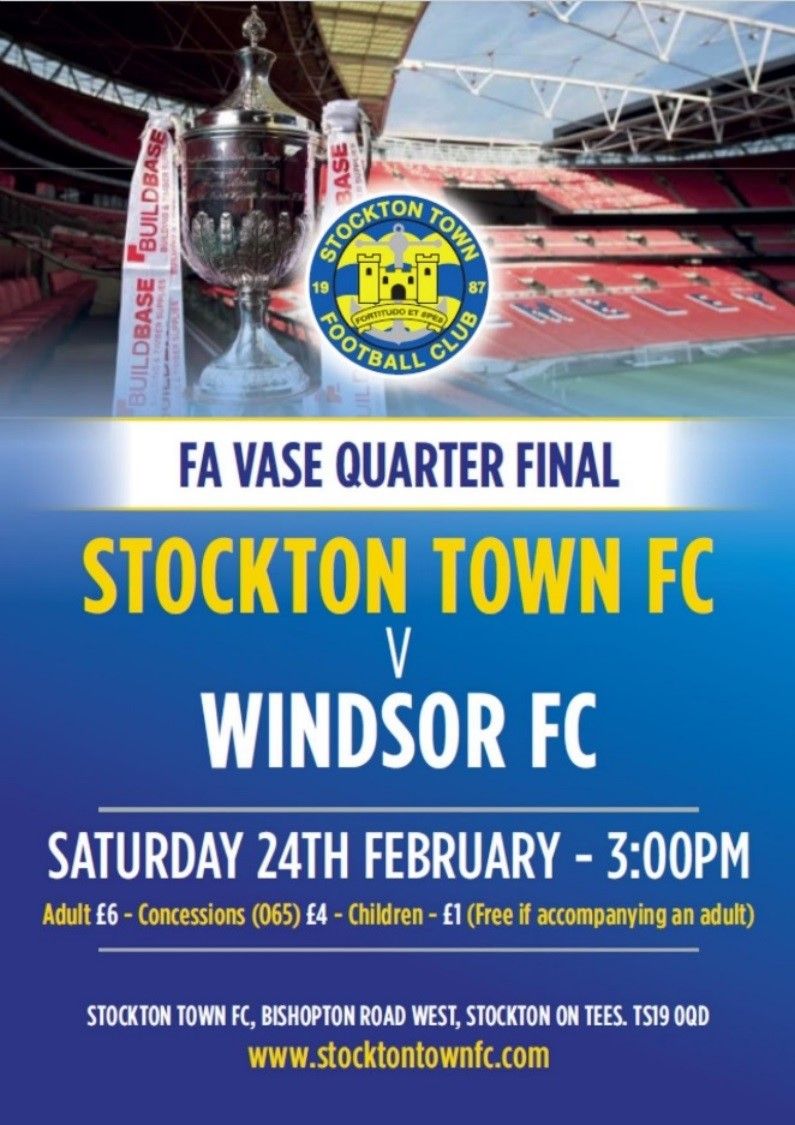 This Saturday will see the biggest game in Stockton Town Football Club’s short history when they take on Windsor FC in the Buildbase FA Vase Quarter Final. Following is a brief preview of the game and in anticipation of another record crowd, including ‘first timers’ at Bishopton Road West and visitors from Berkshire, a short guide to the ground and facilities.

Don’t let anyone tell you Stockton doesn’t have a long history in non-league football, it’s just been on hold for a while. There’s been a football team in Stockton since 1882, and at times a bloody good one. They were founder members of the Northern League in 1889. They won the FA Amateur Cup 3 times and reached the final on 4 other occasions and were Northern League Champions five times before WW2. After the war they played in the North Eastern League, which was where the Northern Professional Clubs Reserve sides played and they would command crowds of thousands to ‘The Vic’ ground in Oxbridge. It was a club and a team befitting a large town like Stockton and that’s how we want to be regarded. Unfortunately after a failed attempt to play in the Midland League amongst others, the club folded in the mid 70s with financial difficulties and for some reason the assets and ‘Ancients’ nickname went to Norton CCT and their football team. There have been other incarnations such as a Stockton FC team in the 80’s which eventually became Thornaby FC and there was a Stockton Town in the mid 80’s, which was borne out of the old Head Wrightson team, they won trophies too but folded after 5/6 years.

This Club is laying solid foundations and is determined to become a fixture in local and national non-league football and after a meteoric rise they’re already creating their own history with this amazing run to the FA Vase Quarter Finals. And on that note….. The ‘Anchors’ have had a mixed bag since Xmas but the seeds of coming back to some form were seen last week. The occasion and crowd will lift the team again as it has on several occasions already this season without doubt. Manager Michael Dunwell has a couple of injury concerns with Dale Mulligan and Chris Stockton both doubtful and Joe Carter is away working so last weeks U18 debutant Jack Lambert may well be called into the squad again, if either injured player doesn’t make a recovery, which would be thrilling for him. There haven’t been many low key games at BRW this season, in fact you’re almost guaranteed goals and excitement as the Anchors rely heavily on the attacking side of their game and the surface certainly helps with that. The system has proven very successful this season so although things will obviously be a little more tense as both sides move towards a possible Wembley appearance, we hope for the sort of entertainment that’s been attracting new fans every week. 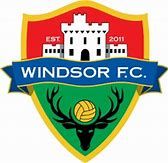 Windsor Football Club was formed in 2011 by fans of the original club, Windsor & Eton FC, after it was unfortunately wound up with large debts at the time. Windsor & Eton FC were formed in 1892 and had a rich history in football in the South of England. ‘The Royalists’ are currently members of the Hellenic League Premier Division standing in 9th position and play at Stag Meadow ground in Windsor, Berkshire. Much like the Anchors their recent form has been mixed but a battling draw against high flying Thatcham last Saturday will have given them a lift going into this Vase tie. Both sides appear to have reserved their best performances for the FA Vase since the start of 2018. Windsor despatching Eastbourne Town and Hamble Club FC in the previous two rounds and the Anchors producing a brilliant display to beat favourites West Auckland and (eventually) ease past Stourport. Windsor’s distinctive strip isn’t the only thing to look out for, they boast an Ex Premiership footballer amongst their ranks. Barry Hayles who played 175 times as a striker for Fulham in the 90s when they were at their peak, still turns out and is still scoring goals at the age of 45, as the saying goes class is permanent. One to be watched. We hope to make some more new friends amongst the Windsor people and we hope they enjoy their weekend in the North and its not too cold for them,  but we hope they’re wishing us ‘Good Luck’ for the Semi Finals and not the other way round.

PLEASE NOTE IF THE GAME IS TIED AFTER 90 MINUTES, THERE WILL BE 30 MINUTES EXTRA TIME PLAYED. IF STILL A DRAW AFTER THAT PERIOD THE GAME WILL THEN BE REPLAYED AT WINDSOR’S GROUND NEXT SATURDAY, THERE IS NO PENALTY SHOOT OUT.

Some useful details for Saturday’s game:

The facility is within the grounds of Stockton Sixth Form College opposite Sainsbury’s and as you drive into the Car Park the Pitch is to your left and the Clubhouse is over to the right.

The club/college car park holds 250 vehicles so should be enough, although it is expected to be full, if so please DO NOT park in the streets opposite, use Our Lady and St Bedes School car park which is the next left turn after the ground. We have no agreement with Sainsburys supermarket (opposite the ground) so can’t suggest that as an alternative. They have a 2 hour max parking limit so it’s in your own hands if you decide to make a purchase in the shop and leave your car there. We don’t want to give our neighbours any reason to complain so please do be considerate about your parking.

There is no bar or alcohol served or allowed inside the ground. The main Clubhouse and bar is separate from the Stadium and is in the Car Park on your right as you drive in. This will be open from 9am as usual, serving Alcoholic and soft drinks, Tea, Coffee and (because of anticipated numbers) a limited food menu. Live Sky football will be on the multiscreen TV’s in there, the Club is large by normal standards but will be very busy and although most of the furniture will be removed to fit more into the bar area we would ask for your patience in getting served and with any congestion. There will be an additional bar in the side room just next to the Main Bar entrance selling can’s. All drinks will be served in plastic glasses to ease the bar staffs burden of washing up. Inside the ground there is a Tea Hut, serving Hot and Cold drinks and basic food such Pies, Hot Dogs, Crisps, Sweets etc.

Entry prices are £6 for adults, £4 for OAP’s with U16 £1 (FREE if accompanying an Adult). Both Turnstiles will be open from 2pm but please arrive as early as possible as if 300 people turn up at 2:55, it will take time to get into the ground and they will miss some of the game. ‘Queue Jumper’ tickets are available on the day and will be sold in and around the club before 2pm. Anyone purchasing these can enter the Ground by the Access Gates to ease the congestion on the Turnstiles, you must give up the ticket at the gate. Again, there will be a big crowd attending the fixture so it will be busy and hectic at times inside the ground, fans do tend to congregate on the near side but there is plenty room all around and it may be more comfortable if everyone spreads out a little. There are stewards available to help but can we request that you remain patient if waiting for refreshments/Toilets or entrance into the ground and if there are any problems or issues that you contact a steward or committee member immediately. We also request that you observe any instructions issued by the stewards for your own safety.

Programmes are available inside the ground for £1 (whilst stocks last) also Stockton Town FC Scarves, Hats and Pin Badges are available on the day from the Programme vendor area, other club merchandise can be ordered online or via the club, check the website for details here . http://stocktontownfc.com/club-shop/