ANCHORS TAKE THE STING OUT OF THE HORNETS 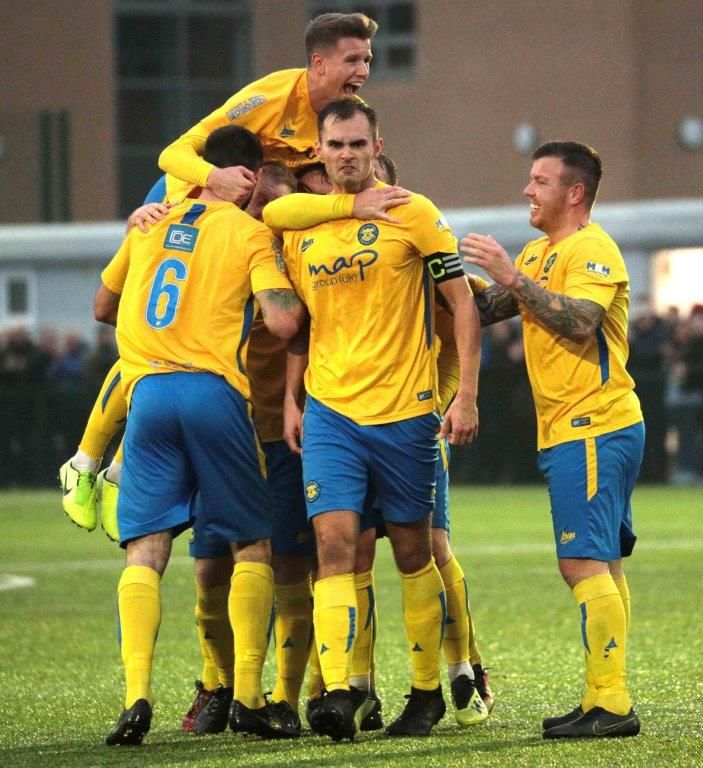 The Anchors made a huge statement here today beating League Leaders Hebburn Town in a classic fast paced encounter full of good football and incident in front of a huge crowd of 618, a record for a League game. Goals from Nicholson, Owens and Mulligan saw the Anchors move into second place and continue their unbeaten run.

The first period was pretty even both sides were cancelling each other out in the final third and chances were limited but the quality of play was as high as you get at any level.

Roberts made a sharp save from a turn and shot by Armstrong inside the box look very easy. Then two minutes later Owens worked his way into the box with quick feet and his left foot shot across the goal was just wide of the far post, it looked like the keeper got a slight touch it but the ref disagreed.

Once the game settled The Anchors looked the more likely as Hebburn seemed to be happy to sit in and rely on their talented forwards to grab something for them.

Hayes collected a super cross field ball from Bulmer and his cross was nicked off the head of Owens for a corner. Lewis King linked with Portas and turned inside the fullback picking out Woodhouse with a ball but the shot was well saved by Jennison

Hebburn were always dangerous and a quick move down their right saw Robson fizz in a cross which Armstrong back heeled just wide and Dib-Fuller lobbed an effort over the bar. But it was Stockton who opened the scoring on 32 minutes.

A free kick on the half way line wasn’t cleared and NICHOLSON latched onto the loose ball and sent a good effort goalward only to see Jennison get just enough of a touch on the ball to deny him. Hayes swung in the resulting corner and the skipper finding himself free in the box made no mistake heading the ball down into the ground and watching it bounce up into the roof of the net 1-0

Hayes was in the action again shortly after skipping inside and firing a beauty in but Jennison diving to his right got a firm hand to it and keep it out.

The save was crucial as Hebburn enjoyed their best spell of the game with Coulthard blocking Robson’s shot and Callum Roberts making a pointblank save from Richardson. It was Hebburns number 10, Michael RICHARDSON pushing further forward now who grabbed the equaliser just before halftime when he turned the loose ball into the empty net after Roberts had stopped Armstrongs shot HT 1-1

The second half belonged to the Anchors. Hebburn had their fair share of possession but couldn’t sustain any real pressure with the Anchors defence at their brilliant best and the attacking pace and movement creating several good opportunities

Lewis King set the tone in the first attack racing down the right wing his cross had Jennison flat footed but it clipped the bar and fell to safety.

Jamie OWENS rarely misses out and today was no different grabbing his 21st goal of the season. Hebburn’s Donaghy made a mistake trying to clear and Fred Woodhouse was on hand to punish it, picking up the ball and turning inside to roll it to his striker who set it onto his trusty left foot and crashed it into the left hand corner from 22 yards giving the keeper no chance. 2-1

The Anchors were flowing now and as Hebburn pressed to get back in the game Stockton were looking increasingly more solid breaking it down and then attacking at pace and creating opportunities.

Owens brought a good save from the keeper again, this time with his right foot and after a scramble in the box another goal bound effort was blocked. Hayes cross beat Jennsion but evaded everyone when the slightest touch would have been a goal as Stockton continued to look more dangerous.

The game was sewn up in the 82nd minute when sub Nathan MULLIGAN turned in with his ‘chest’ a cross from Lewis King that was hit with pace and flew past Jennison to the Stockton man, it was no more than they deserved.

The last action of the game in the 6th minute of injury time saw Hebburn work a good position only to see the excellent Dan McWilliams nip in and steal it off the strikers toes as he pulled the trigger, sort of summed it all up. FT 3-1

Some massive performances from the players, as we’ve come to expect, everyone played their part though and gave their all for the team as always. Jordan Robinson got the sponsors man of the match for another superb showing in midfield.

Trophies aren’t handed out until May so suggestions that this was a title decider are not only premature they’re disrespectful to several other top sides in with a genuine shout and who will have their own say, however the result will surely have a positive effect for the rest of the campaign. The manner of the victory merely confirms the team are bang on track for where they want to be, lots of hard games to come yet and a really tough December schedule looms, but first another huge one next week in the Vase, get yourself there you don’t want to miss out on any part of this season, do you?