Anchors move into play-off positions with tense win over Brighouse 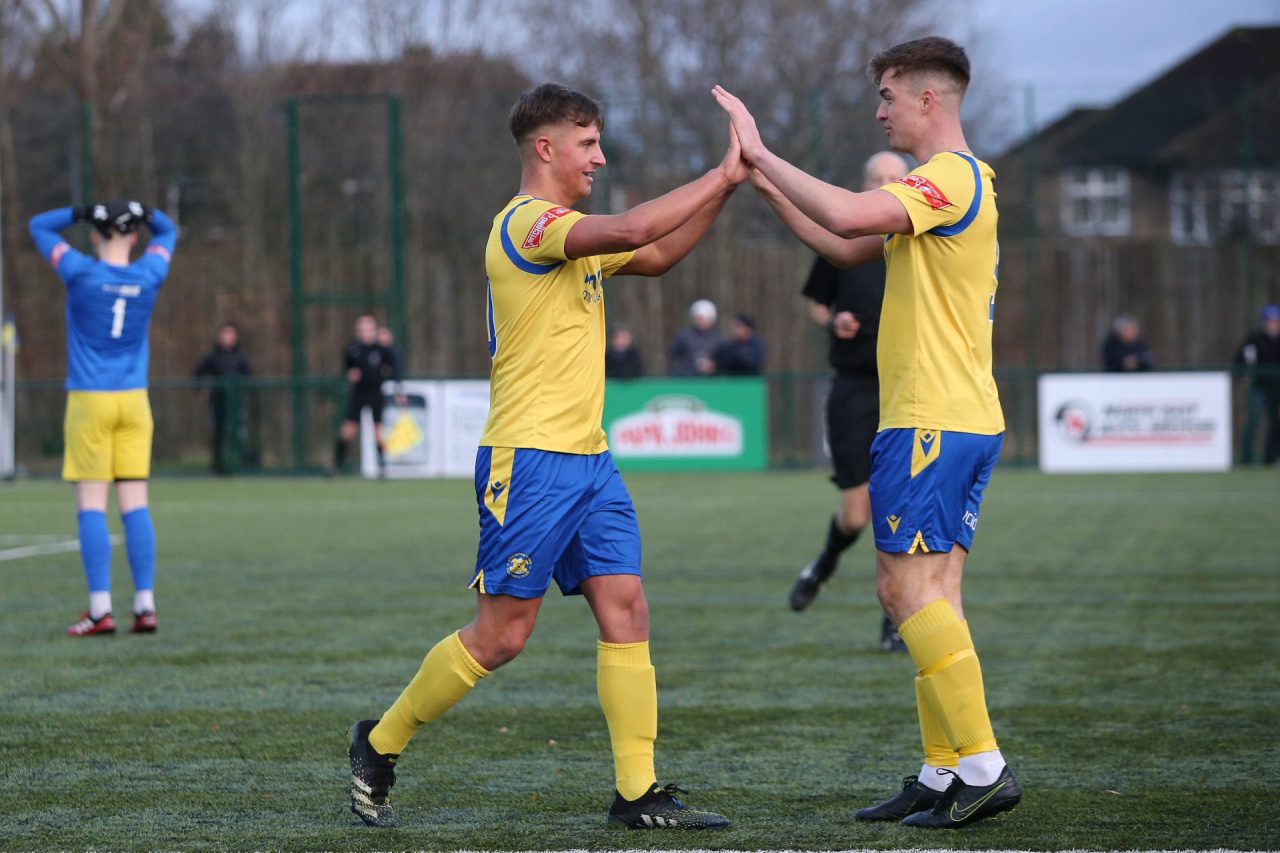 Alfie Conway scored for the third game in a row as Stockton Town moved up to fifth, and into the play-off spots, with a tense 3-2 victory against Brighouse.

Conway, who had netted on his previous two starts, capitalised on a mistake from Brighouse keeper Brett Souter to tap in from close range inside four minutes.

The visitors levelled after 14 minutes as Laurence Sorhaindo struck low into the left hand corner from the edge of the box.

Kev Hayes lashed the Anchors ahead mid-way into the second half with a fierce strike into the roof of the net from Nathan Mulligan’s corner, before Nathan Steel added to the lead with a tap-in on the rebound after Jamie Owens’ fizzed effort hit the post.

Brighouse ensured it was a nervy final five minutes as Shiraz Khan curled in following a fortunate deflection, but the Anchors held out to move up into the play-off positions for the first time since August.

Michael Dunwell opted to make just once change to the side which defeated Tadcaster Albion a fortnight ago, with Nathan Mulligan entering the side in place of Tom Portas.

Stockton started the game quickly and could have taken the lead before Alfie Conway’s goal, Shane Henry connected to Dan McWilliams’ cross but it was inadvertently blocked by Steel.

Despite their bright start, Stockton were soon pegged back as Sorhaindo fired the visitors level, before having the chance to give Brighouse the lead but his effort was high and wide.

The final half-hour of the first half was a tight and tense affair, with little in the way of clear cut chances for either side, save for Zeph Thomas’ tame shot which Callum Roberts easily claimed.

From the first real action of the second-half, Stockton reclaimed their lead, Nathan Mulligan’s corner was cleared into the path of Hayes who lashed a stunning effort into the top of the net with his right foot.

The goal gave the home side some momentum and notched the decibel level up in the crowd, and Michael Dunwell introduced new signing Liam Cooke to the play with 20 minutes remaining.

Cooke looked lively and was involved almost immediately, driving at the Brighouse defence and hitting the side netting from a narrow angle.

Stockton doubled their lead with just under 15 minutes remaining, Cooke played the ball into the path of Owens, who struck across goal and was unlucky to hit the post, before Steel latched onto the rebound to make it 3-1.

Sorhaindo raced in behind the defence and forced a save from Callum Roberts, before blazing his second attempt high and wide with just an open goal to hit.

Brighouse took advantage of an element of good fortune to reduce their deficit, Shiraz Khan converted after Lewis King’s tackle on Jack Boyle fell into his path.

After a nervy five minutes of injury time, the Anchors held out to earn a vital three points, and move up to fifth in the Northern Premier League East Division.

Next up for Stockton is a North East derby at Hebburn Town on Saturday 11th December, which will be a 1:00pm kick off.