ANCHORS GRIND IT OUT IN CLECKHEATON 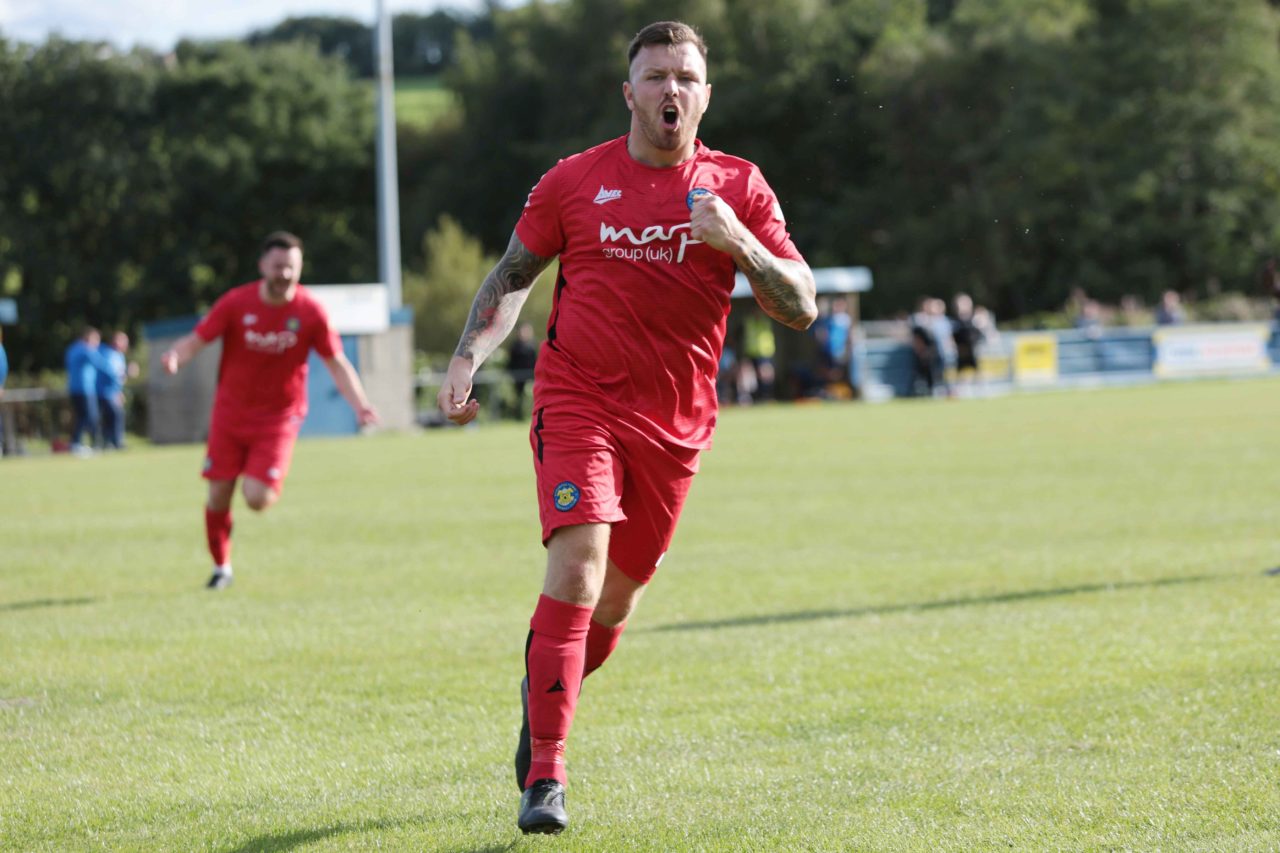 Stockton travelled to West Yorkshire today to take on a confident Liversedge team who’ve had a good start of the season. A disciplined professional performance amidst a barrage of long balls and route one football showed they have the minerals to take on anything thats thrown at them right now add to that two great finishes and it was enough to take Stockton into the hat for the 2nd Qualifying Round and join the Step 2 big boys.

Liversedge started better and put the Anchors under immediate pressure their game being based around getting the ball into the big men up front early and picking up the pieces. After just 2 minutes a long throw in deflected for a corner off Coulthard and the ball in the box showed what Stockton were facing as 5 or 6 Liversedge players threw themselves at it and it looped onto the roof of the net

There was a brief respite as Stockton’s Hayes suddenly got a break as he cut inside but his left foot shot was shepherded out by keeper Lill although it looked a bit closer to the upright than he thought.

Callum Roberts made a terrific save at the feet of Walton who was proving a handful physically and when his stray arm cut the head of Coulthard it was a surprise the Ref only asked if his elbow was ok. The Anchors were in a right battle and two falls and a submission was the likely outcome.

Liversedge cranked up the pressure and Fearon rose highest to a corner only to see it deflected just wide off a defender with Roberts beaten. Dan McWilliams made a great block from a good effort from Bottomley as he picked up the pieces from another aerial battle. The physical presence was evident all over the pitch and Liversedge were winning the ball back quickly and playing down the slope they were testing Stocktons resolve

There was very little of note to report apart from a Jamie Owens snap shot from a loose ball on the edge of the box, Lill dealing with it full stretch. Liversedge continued to push high up the pitch at every opportunity and throwing the ball in to the ‘mixer’, they would have been disappointed not to have taken advantage in the first twenty minutes when they were on top HT 0-0

Second half Stockton regrouped and gained some control holding a good line and the Anchors central defenders were winning their share of the aerial battles and the midfield were now picking up the second balls, still wasn’t much football being played but as the physical effort expended by Liversedge started to take its toll on them spaces starting to appear and The Anchors came into the game.

Dan McWilliams found Pete Bulmer running diagonally and his right foot curling foot shot stretched Lill, his parry luckily fell to a Liversedge defender who cleared. Then a good sweeping move on 66 minutes found Lewis King who’s deep cross picked out Risbrough at the far post and his header beat Lill but Jackson got back to hook it off the line and clear

Ironically Liversedges main weapon was their downfall as a long throw in was cleared and with all the big boys in the box Robinson eventually picked up the loose ball and freed King again in acres of space down the right he raced forward and picked out ROBINSON hurtling into the box who met it with a perfect side foot volley past Lill into the net to send the travelling hordes of Stockton fans wild with delight. 1-0 75 minutes.

Only one winner from there on in Liversedge huffed and puffed but they were now being outmuscled and out manoeuvred by the Anchors as they managed the game superbly.

Jamie OWENS in his 100th start for the Anchors got his 78th goal in typical fashion when he collected a long ball upfield and turned the centre half to crash a left foot shot past the static Lill into the far corner. FT 2-0

Great win for the Anchors, the key was getting through the first 30 minutes of pressure from Liversedge without conceding and once they did that confidence was raised that Stockton would get a result. Six clean sheets in a row now highlights the changes in the teams approach from last season and the 20 goals scored shows they’re just as ruthless and exciting to watch. Fantastic following again from our terrific set of fans also, what a lift they give the lads

Keeper Callum Roberts is exuding confidence, Nicholson and Coulthard once again stood firm and dealt with the tough physical battle in the face of a bombardment at times. McWilliams, King and Mulligan worked their socks off too for 90 minutes, Jordan Robinson capped another brilliant display with a superbly taken goal and he gets MoM for a complete holding midfield performance.