A Season Like No Other, says Forward Mikey Roberts 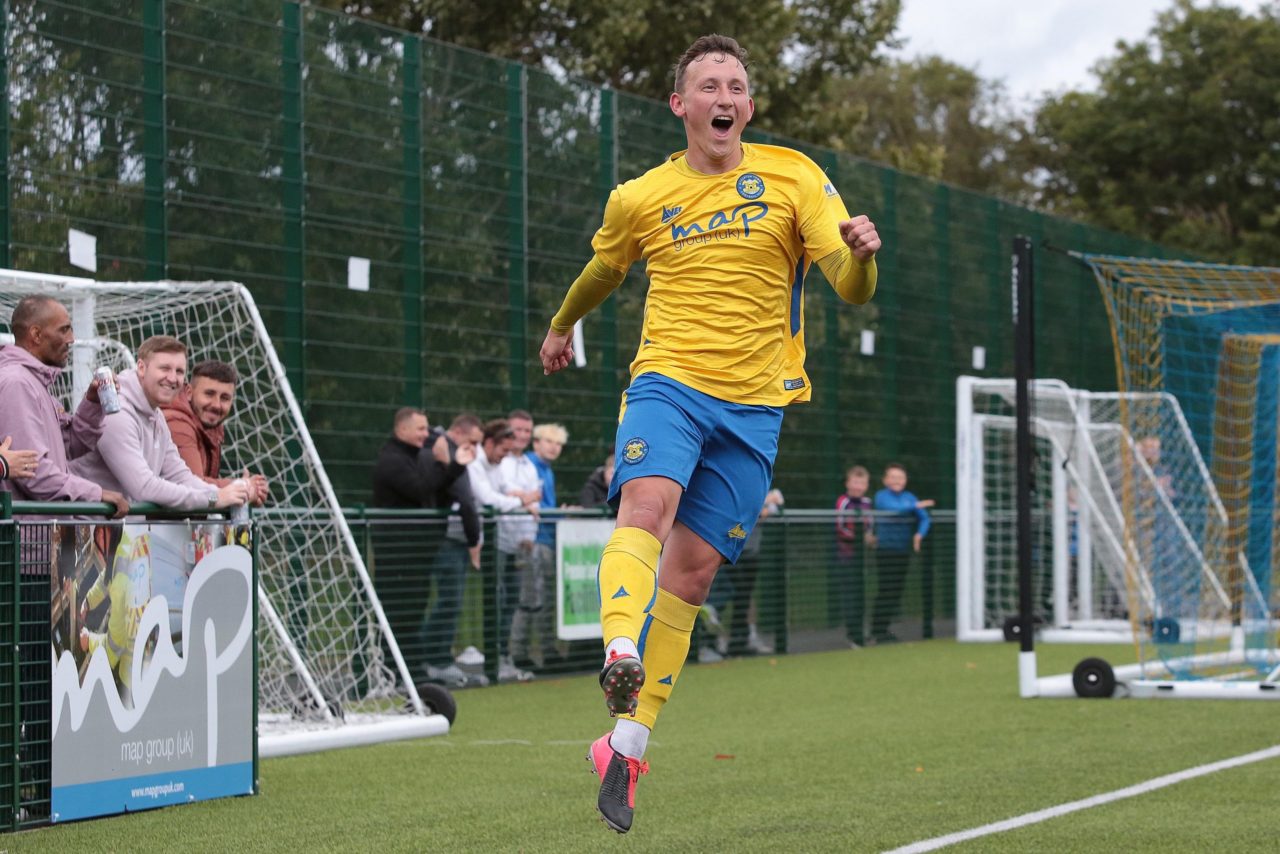 Stockton Town forward Mikey Roberts admitted that it has been “a season like no other” as the return of Northern League football is looking more unlikely due to the ongoing pandemic.

Roberts, who joined the Anchors from Marske United at the start of the 2018-19 season, hit form in all competitions prior to the suspension of football, with nine goals in his 17 appearances this season.

The 29-year-old has been a prominent feature of the Stockton side since his arrival and surpassed the 100-appearance mark after starting for the Anchors in the 5-0 victory away at Whickham in October.

However, it has been over a month since Michael Dunwell’s side were last in action – in the Buildbase FA Vase – and Roberts opened up about a “very strange” season so far.

“It has been a season like no other,” the forward said. “I’ve never known anything like it in my time playing, which is 12 or 13 years in adult football, so it is a very strange one.

“We were allowed a certain number of fans, then a few more, then less and then none and it was very strange because the fans make football what it is.

“Even watching the Premier League, you notice it’s just not the same without the fans. In terms of ourselves, we had a blip in the league where we drew a few and lost a couple, but I think we started to find our feet.

“We got a job done on us in the FA Vase and that happens, we weren’t happy with the result, but we were finding our feet in the league and kick on really.

“We were starting to look how we did in the season before. We had Hebburn (Town) in our sights and they certainly weren’t unreachable, so it was frustrating when the season was halted.

“The stop-start nature kills any momentum you build up. Just before they stopped the league, we hit form, we were getting the wins on board, we climbed right up and personally I thought I hit form.

“Then all of a sudden we weren’t allowed to play league games, but we had to keep ticking over ready for the Vase games, knowing we still had that competition.”

The UK is now currently in the third lockdown phase due to the ongoing pandemic, which means the return of non-league football from Step Three and below is unlikely anytime soon.

Roberts, a former Northern League Division One champion with Marske, admitted that he and the rest of the Stockton squad are “fortunate” with how professional things are at the club because the players have been able to keep “ticking over” since their last match.

He added: “It’s another tough time with another lockdown. It’s another stop to football again, continuing the stop-start nature of this season.

“We’re quite fortunate as a club the way it is ran really well. The lads have been given programs and things to get on with while we’re off and it keeps everyone ticking over in terms of fitness and stuff.

“Away from the fitness side, our group of players is such a good group and are close that we are constantly keep in touch. We’ve always got something on the go to keep us all together still like little competitions in the group chat.”

The ‘Project Non-League’ proposal has been circulating around the non-league scene recently and is at the forefront of the minds of teams as another null-and-void season could be detrimental to the future of some clubs.

The Anchors, who had lost just one game all season, were in unbeatable form having not lost a league game in their last 20 matches in the 2019-20 season – winning 16 and drawing four.

Dunwell’s men would be top on a points-per-game basis if the two seasons were put together – under the Project Non-League proposal – but any decision looks to be far from being made.

Roberts, speaking about the proposal, said: “That’s arguably the best way to go. It would be great, it would get teams that have worked hard, got the results and earned their way up the table, up the ladder.

“It’s probably the best option rather than wasting two years of peoples football careers for nothing.”

The rise and success of the club won’t be stopped. There have been set-backs along the way, such as not being able to get promotion for three seasons due to certain ground regulations in the Wearside League days, but Stockton have fought to be successful every step of the way.

Roberts stated that the club will “keep growing” and look to progress up the non-league pyramid and the forward wants to be part of the long-term future of the club.

“It’s something I want to be a part of and I definitely see us, as a club, progressing,” he said. “There’s nothing stopping Stockton doing what the likes of South Shields and Spennymoor (Town) have done, who were once in the Northern League.

“Stockton are a really well-ran club. It’s got the support that just keeps growing, the sponsors and the right people in place, so I don’t see why it can’t kick on.

“We probably would’ve been one step closer to our goal if the pandemic didn’t hit, but if the fans stick by us and keep coming to support us, when they’re allowed back, then I think it’s only a matter of time that this club kicks on even more.”

Although the return of football is unlikely, the forward is remaining positive and is looking forward to the day supporters can return. Roberts also has a message for all of those Stockton fans.

He said: “I am hoping all of the Stockton Town fans are staying safe and looking after themselves. Hopefully we can see you all back as soon as possible, get the ground rocking again when we’re allowed all of the fans back in.

“It will be brilliant to have everyone back supporting us again and hopefully, whether it’s a new season or a cup competition or whatever it may be, we have them there right behind us, so we can kick right on as a football club for this town.”