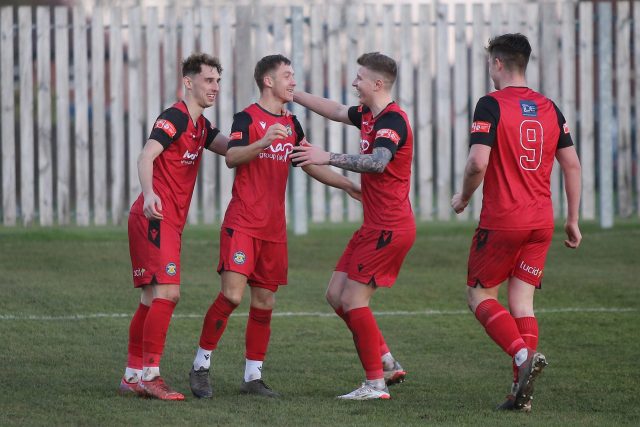 Mikey Roberts' 12th goal of the season was the difference between the two sides at half-time, with Hayes netting his first of the afternoon two minutes into the second-half.

Adam Nicholson and Liam Cooke were both on target before Hayes scored two in quick succession at the end to wrap up a comprehensive victory for the Anchors.

The win means the Anchors are guaranteed to sit third in the division when league-leaders Liversedge make the trip to The MAP Group UK Stadium next weekend.

Manager Michael Dunwell named an unchanged side to the one that beat Lincoln United last Saturday, and it was the hosts that went close inside the first five minutes.

Brandon Holdsworth skipped down the byline and poked a cross into a dangerous area, with Lewis King on hand to clear any danger.

The Anchors stamped their foot on the game and went close themselves with Kev Hayes forcing a save from Lucas Martin on the volley, before Nicholson skimmed the crossbar with a back post header.

Lewis King was called upon to make a crucial goal denying block from Alhassane Keita, who looked lively early on.

Just minutes later, M.Roberts opened the scoring as he was played in behind the Pickering defence and slotted home calmly for his 12th goal of the season.

Nicholson again hit the woodwork as Nathan Steel knocked down Callum Roberts' free kick into the skipper's path who saw his effort hit the upright.

It was a back-and-forth first half without many real clear cut chances, until Hayes raved in behind the offside and forced Martin into a good save.

Stockton, so often a second half side this season, stayed true to type with a blistering performance in the second period, adding a second goal just two minutes into the half.

Roberts, a lively figure throughout, brilliantly forced a Pickering defender into a mistake and capitalised by setting up Hayes to double the Anchors lead.

Shane Henry went very close to adding a third with his first goal of the campaign, Roberts found the midfielder's inside run and his shot was just wide.

Stockton were relentless in their attacking nature and almost scored a fourth soon thereafter, his chipped just sailed over the bar.

Cooke scored his second goal for the Anchors midway through the second-half, beating Martin to the ball when one-on-one and tapping home.

The midfielder almost added his second of the game and Stockton's fifth as his shot was somehow cleared off the line.

Jonathan Franks thought he'd scored his second of the campaign when Jamie Owens played the winger in but the offside flag went up to deny him.

Hayes added two goals late in the day, curling in from inside the box then added gloss to a sensational display with his hat-trick goal in stoppage time.

Next up for the Anchors is a bumper fixture against the league-leaders Liversedge on Saturday.