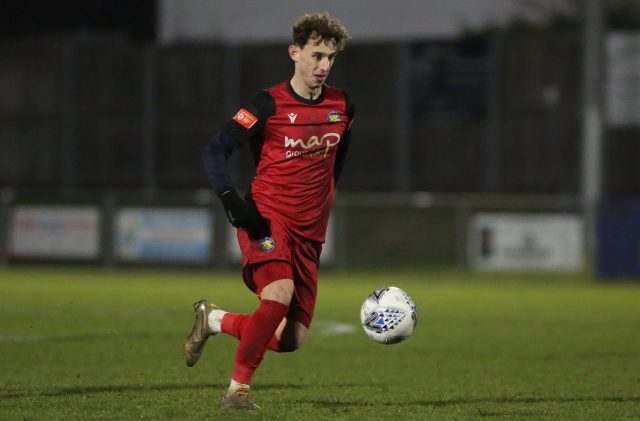 Jack Greenhough was dismissed for a dangerous challenge on Mikey Roberts on the stroke of half-time, a half in which the hosts were the superior outfit.

Gavin Rothery broke the deadlock with just over 15 minutes remaining, curling in directly from a corner. Joe Lumsden sealed matters with a second goal in the final minutes.

The Anchors impressive winning run in league football comes to an end at ten games, a streak which has catapulted Stockton into playoff contention.

The Anchors began brightly and forced a couple of early chances with Kev Hayes seeing a shot deflected behind and Liam Cooke with a shot blocked.

Pontefract grew into the game and forced Callum Roberts into a fine stop through Lumsden’s curling effort towards the far post.

Mikey Roberts got a shot at goal which was met by Lloyd Allinson, with Lumsden sending a snapshot wide.

Mikey Roberts latched onto Adam Nicholson’s lofted pass and almost looped the ball beyond the backtracking goalkeeper but it went over the bar.

Greenhough was shown a straight red card on the verge of half-time for bad challenge on Mikey Roberts from behind.

Pontefract started the second half brightly, with Hinsley going close just before the hour mark.

The hosts took the lead on 72 minutes, Rothery with a looping corner towards the far post.

Nathan Mulligan tested Allinson with a free kick from just outside the area, his effort was claimed by the Pontefract ‘keeper.

Colls doubled their lead with just a few minutes to go, Lumsden intercepted the ball and curled into the bottom corner.

Hayes and Shane Henry combined well on the right hand side, who’s swinging cross was headed over by Jamie Owens.

Next up for Stockton is a North East derby with Dunston next Saturday at the UTS Stadium.