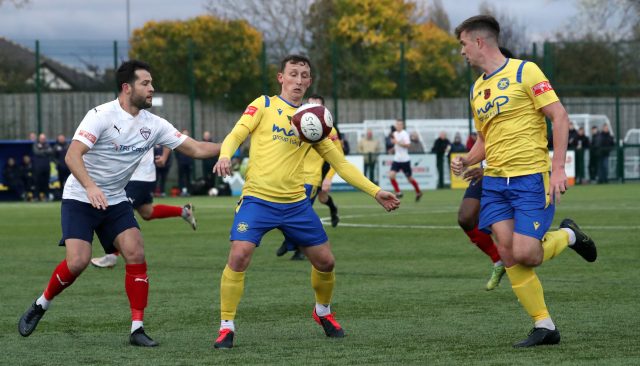 Roy Fogerty sent Yorkshire Amateur into the lead just after the hour mark before Mikey Roberts netted coolly from the spot to earn the Anchors a point.

Michael Dunwell named one change to the starting line-up which thrashed Lincoln United 5-0 at Ashby Avenue, with Jonathan Franks entering the team in place of Kevin Hayes.

The Anchors had the first chance of the game, Nathan Mulligan’s corner was headed down on goal by Adam Nicholson but it was tipped over the bar by Kyle Trennery.

Yorkshire Amateur almost went in front themselves on seven minutes, Roy Fogerty played the ball across to Casey Stewart who hit his effort over the crossbar on the edge of the box.

Lewis King, Mulligan and Nathan Steel combined well on the right hand side as Mulligan played Steel through, who turned smartly and forced a corner for the Anchors.

Mikey Roberts looped a header from Tom Coulthard’s free kick onto the top of the net before the Ammers broke with pace and could have taken the lead but Adam Priestley blazed his shot over the bar.

Callum Roberts produced a fine save to tip Marko Basic’s curling effort at full stretch over the crossbar.

Matthew Dempsey then hit the crossbar before Shane Henry hit a rasping half-volley which Trennery tipped over the crossbar.

The visitors ended the half the stronger side and hit another piece of woodwork in a melee around the Anchors goalline.

Mikey Roberts had the first shot of the second-half, shooting low at goal but it was claimed by Trennery.

Stewart sent a free header wide at the back post and Yorkshire Amateur took the lead on 63 minutes as Fogerty turned home in a scramble on the Anchors goal.

Franks and the substitute Jamie Owens had efforts on goal before the home side were awarded a spot kick after Mikey Roberts was scythed down in the box with no clear attempt to win the ball, with only a booking forthcoming.

Roberts stepped up and calmly slotted home, which gave the largest Anchors crowd of the season a lift as the volume ramped up.

Luke Dean continued to pose a threat for the visitors and looked to round Callum Roberts but his effort from a narrow angle went wide.

Stockton are next in action on Tuesday evening when they make the trip to Derbyshire to take on the world’s oldest football club, Sheffield FC.