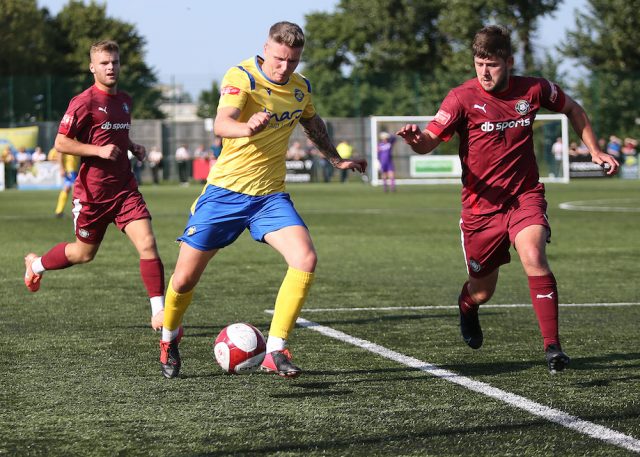 Stockton Town were edged out 1-0 by Worksop Town on a frustrating afternoon, which was their first home league defeat in two-and-a-half years.

Ben Tomlinson fired against the post inside the opening stages of the game before Lewis Gibbens headed home from Connor Smythe’s long throw-in.

After a first-half of very few chances, the Anchors came out on top and went close through Kev Hayes and Jamie Owens.

In the closing stages, Adam Nicholson and Tom Coulthard were both denied by the post.

Manager Michael Dunwell made one change to the side that beat Bridlington Town on Tuesday evening, with captain Adam Nicholson coming back into the side in place of young defender Louie Hall.

With just 15 seconds on the clock, Worksop latched onto a loose pass from the back. Zayn Hakeem was picked out, but the forward fired into the side netting.

The visitors continued their bright start to the game, and hit the post with four minutes on the clock. Tomlinson struck the post and Hakeem fired the rebound wide of the target.

Stockton responded with a chance of their own just a minute late. Tom Portas made a charging run from his own half, through the midfield and clipped a cross-field ball over the Worksop defence, which was volleyed narrowly wide by Mikey Roberts.

The breakthrough came in the 13th minute, with the visitors opening the scoring when Gibbens flicked Connor Smythe’s long throw-in across and into the far corner of the net.

Jamie Owens dragged an effort wide on the half-hour mark, but the game continued in an entertaining manner, however, neither side managed to put together a clean-cut chance – with only one shot on target apiece in the first half.

The hosts come out with a spring in their step and went close to equalising when Kev Hayes glided past two defenders and sent a low shot trickling past the post.

Both sides had the ball in the net within the next five minutes, both ruled out for offside, before Owens flicked Hayes’ free-kick narrowly over the bar in the 55th minute.

The introduction of Nathan Mulligan, just after the hour mark, injected a spark into the game, with the midfielder asserting himself straight away.

It was the Anchors that went into the final 20 minutes on top, and they went in search of an equaliser, with Nicholson connecting well with a header, but being denied by Tiernan Brooks.

Moments after Callum Roberts produced a neat save to deny Steven McDonnell, Stockton went down the other end and were denied by the post when Hayes’ corner was headed against the woodwork by Nicholson.

There was time for one final chance, in the fifth minute of additional time. Tom Portas sent a free-kick floating into the area, which was controlled by Jordan Robinson and his spectacular effort was held by Brooks.