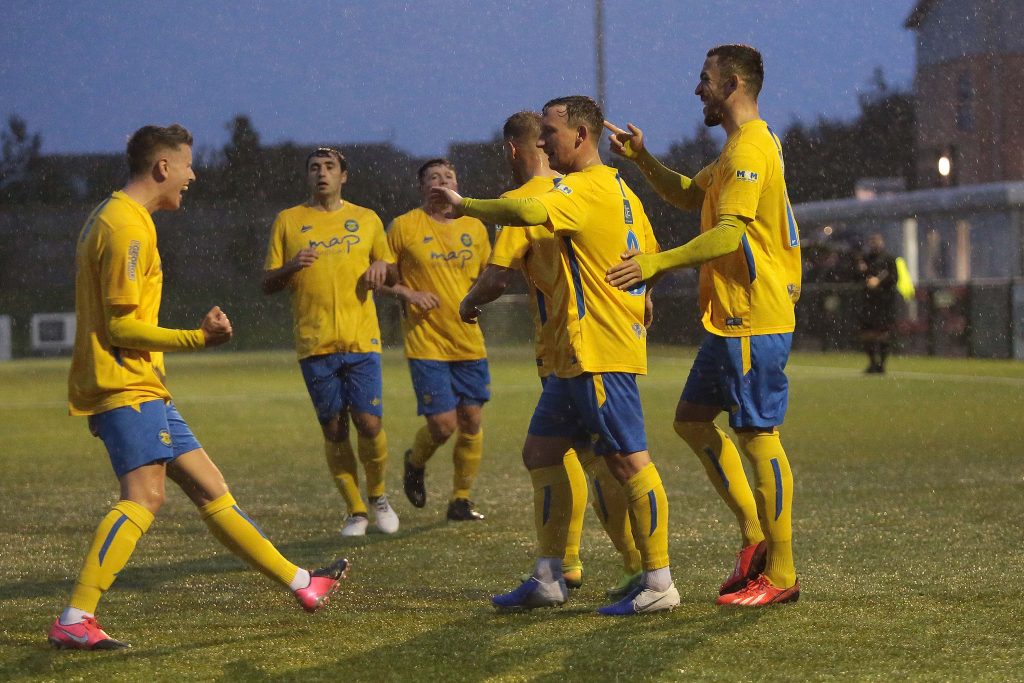 Stockton Town opened their season by progressing to the FA Cup Preliminary Round with a commanding win over Shildon.

First half goals from Mikey Roberts and Nathan Mulligan put the Anchors in a strong position at half-time.

A late headed goal from Jonathan Franks put the gloss on a classy performance from the home side.

Stockton Town had capped off a pre-season with a win at Whitby, while Shildon lost to Morpeth Town.

The game started in monsoon like weather - not something you would typically expect for the opening game of the season.

Not that it deterred Stockton and they had game's first chance when Mulligan fired wide after receiving the ball from James Risbrough's cross.

They then took the lead when Mulligan hounded Shaun Newbrook into an error. The goalkeeper kicked it straight to feet of Roberts who made no mistake to strike home.

Roberts almost had a second when he forced Newbrook into flying save with a shot from outside the area.

The visitors had their first effort when a free kick found Dean Thexton but he only sent a tame shot at Roberts.

Stockton doubled their lead after 25 minutes when Lewis King found Mulligan who calmly found the net via the post.

Shildon were limited to few chances in the first half hour- a wayward effort from Kurt Matthews the only thing they could really muster.

They had another effort when Joe Posthill's strike from outside the box was deflected wide.

Following a torrential downpour at half-time, the game restarted.

Ten minutes into the second half Callum Roberts showed his ability with a magnificent save to deny a Posthill effort that was bound for the top corner.

Franks impressed throughout and he had an effort that proved too much for Newbrook to handle at the first attempt.

He then crossed for substitute Hayes but he could only scuff his effort into the ground and straight in the hands of Newbrook.

Callum Roberts was forced into another fantastic save when he thwarted Michael Sweet who met a cross from the right with a quality header.

Anchors substitute Max Craggs almost made an instant impact but he was unable to make the right connection on another superb ball from Franks.

The home side capped off their night when Franks headed in Hayes' cross from the left.

Shildon were denied a consolation when Sweet could only send his effort straight at Roberts.

The Anchors convincing win means they book themselves an away tie at Billingham Town in the Preliminary Round.

Before that there's league action to attend to- starting with Saturday's home game against local rivals Guisborough Town.