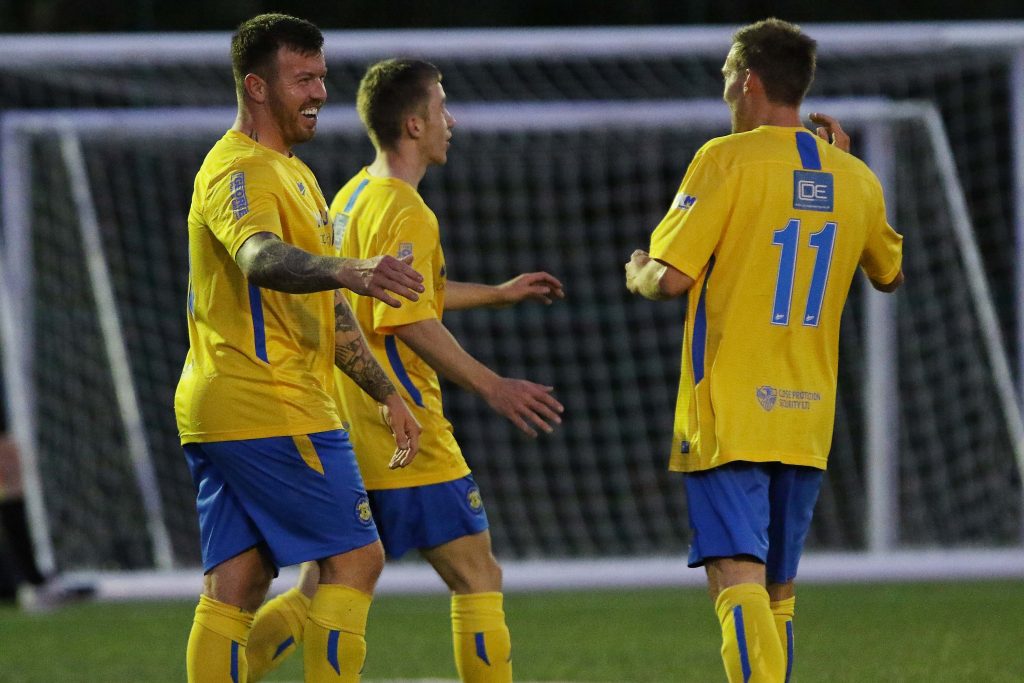 Jamie Owens was the catalyst for tonights victory

The Anchors continued their unbeaten run with another super display. Jamie Owens was the key to a convincing result tonight bagging four goals and providing a finishing master class.

Michael Dunwell made one change tonight resting James Risbrough to give Peter Bulmer an essential run out as Stockton enter a very busy period of games.

The game started at a terrific pace and Newton Aycliffe had come with a fixed plan of pressing high and they looked a mobile and disciplined unit. However the Anchors were more than up to the task and enjoyed the fast pace moving the ball around with great skill. The result was pretty much decided within 20 minutes as the Anchors found the net 3 times leaving Aycliffe stunned.

A long ball down the line was partly cleared and Jordan Robinson, as usual, was first on the scene and won his header, Bulmer had drifted inside and as he collected the ball up to run towards goal he picked out OWENS diagonal run and fed it onto his favourite left foot, as it sat up for him he thumped a shot across the keeper into the far side netting from the edge of the box to make it 1-0 after just 3 minutes. 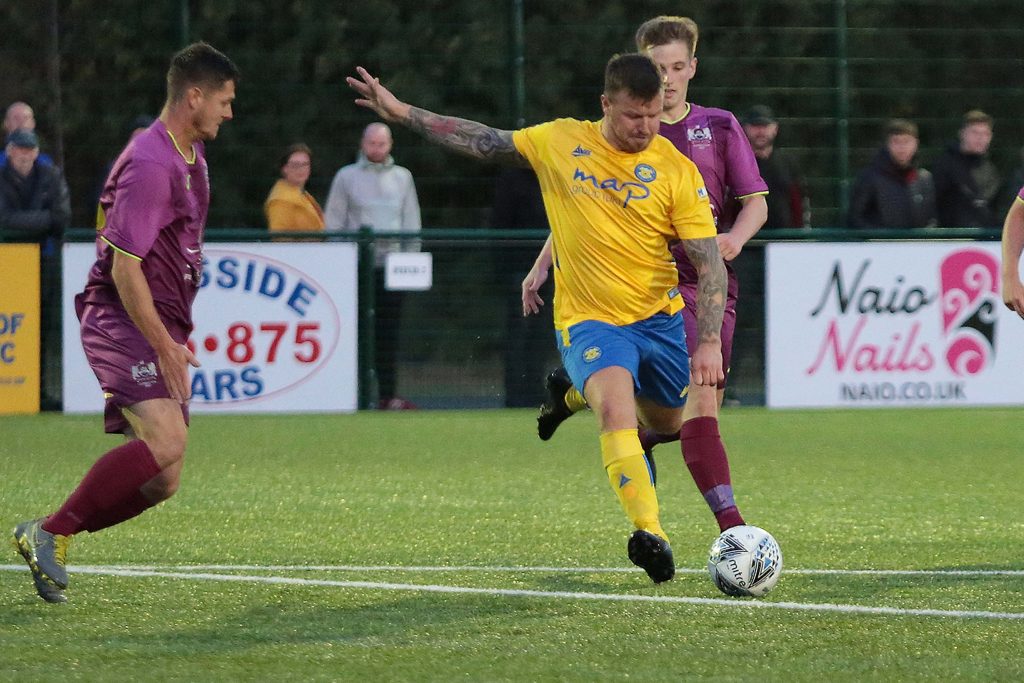 Jamie Owens Crashes in a shot

Aycliffe continued to push high up the pitch trying and make the Anchors go long or make a mistake, all it did though was make them move the ball quicker and with more precision. In form Kev Hayes drifted inside onto his left foot and committed the defence in his inimitable style, but as he tried to play a one two with Owens a defender got a toe in and it looked like the chance had gone so we thought, HAYES who’d continued his run along the 18 yard box picked up the loose ball and crashed a left foot shot back across and into the top left hand corner. After 13 minutes it was 2-0 and Aycliffe were shaking their heads as to how it’d happened. 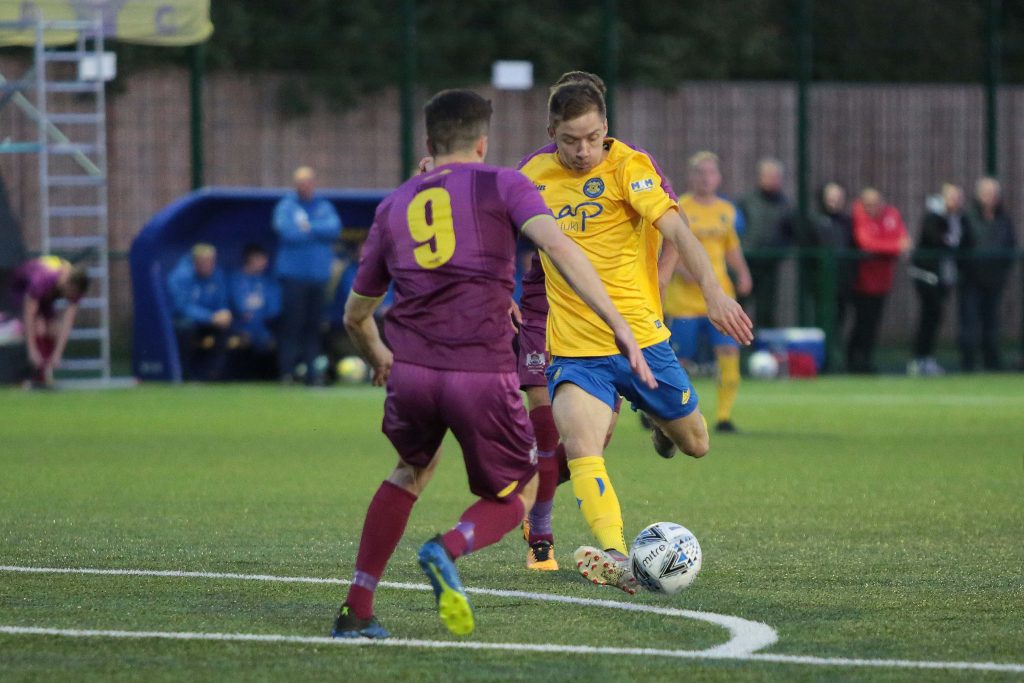 There was no respite for them either and losing left back Harrison to injury merely added to their problems while the Anchors striker Owens now at his bustling best made them even worse as he latched onto a mistake and confusion between keeper Pickford and his defenders, OWENS collecting the loose ball and poking it home from 6 yards, 3-0 with just 20 minutes on the clock, game over obviously…. not the case and credit to Aycliffe for continuing to play in a positive manner. The following ten minutes saw them gain possession of the ball to compliment there mobility and they had a couple of half decent efforts on goal, albeit from long range, although Stockton were still carving out chances, a measured ball just required a more sure touch from the stretching Woodhouse to beat the keeper and Woodhouse made his own effort moving forward and getting off a powerful effort but Pickford made it look easy to collect. HT 3-0 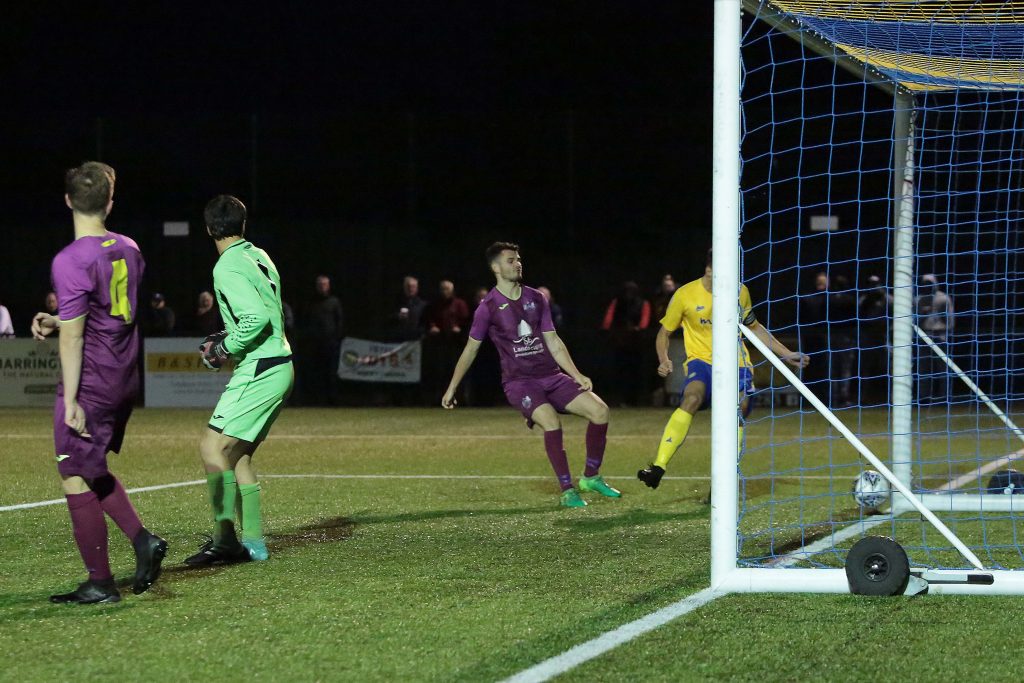 Adam Nicholson sees his effort hit the foot of the post

If anything Aycliffe were trying even harder and the work rate was very impressive, the hosts didn’t panic though and managed the game well with the back line aided by Robinson and showing their quality keeping control and Aycliffe outside of the box, when they did get an effort at goal it was Ballan who thought he had given his team a lifeline only to see Stocktons Roberts flying to his left to grab the curling shot with both hands, making it look routine. 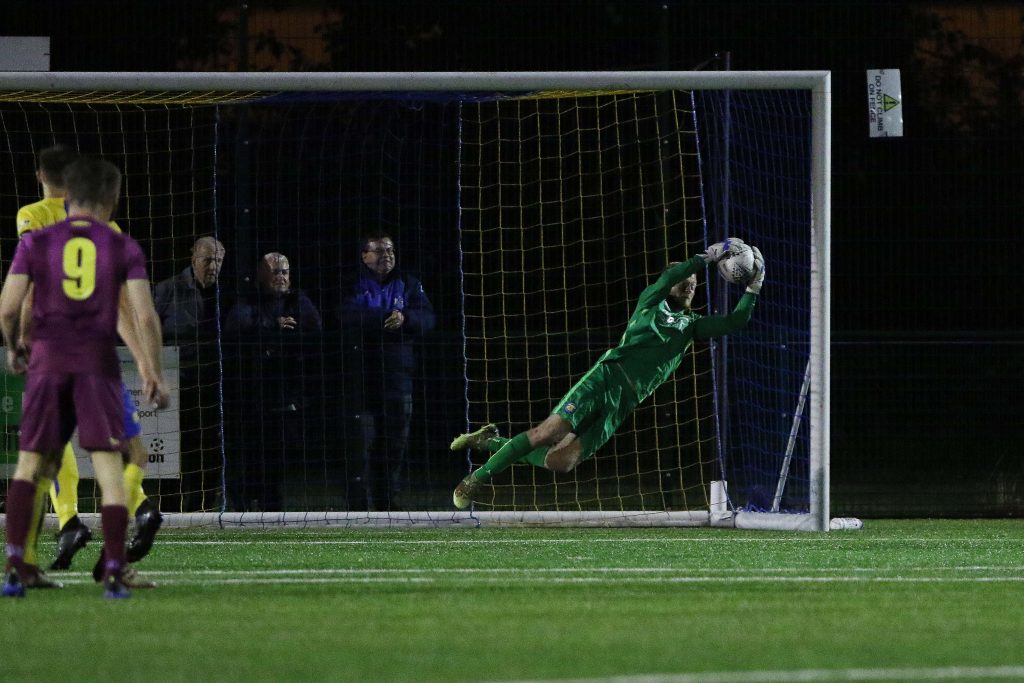 Callum Roberts makes it look easy with a fine save

The bulk of the possession during the middle of the second half was with Aycliffe but the best efforts were still falling to the Anchors. Hayes shot from out wide on the right but his curling effort hit the bar and bounced to safety, Owens who looked in the mood all night showed great feet inside the box and released Bulmer who nipped in and shot only to see it pushed away by Pickford.

Nathan Mulligan contributed twice shortly after replacing Woodhouse, firstly his free kick was saved low down by the near post and then he collected a ball from McWilliams and got a yard on full back Redford before pulling it back across the box for OWENS to side foot home with power to complete his hat trick on 87 minutes. 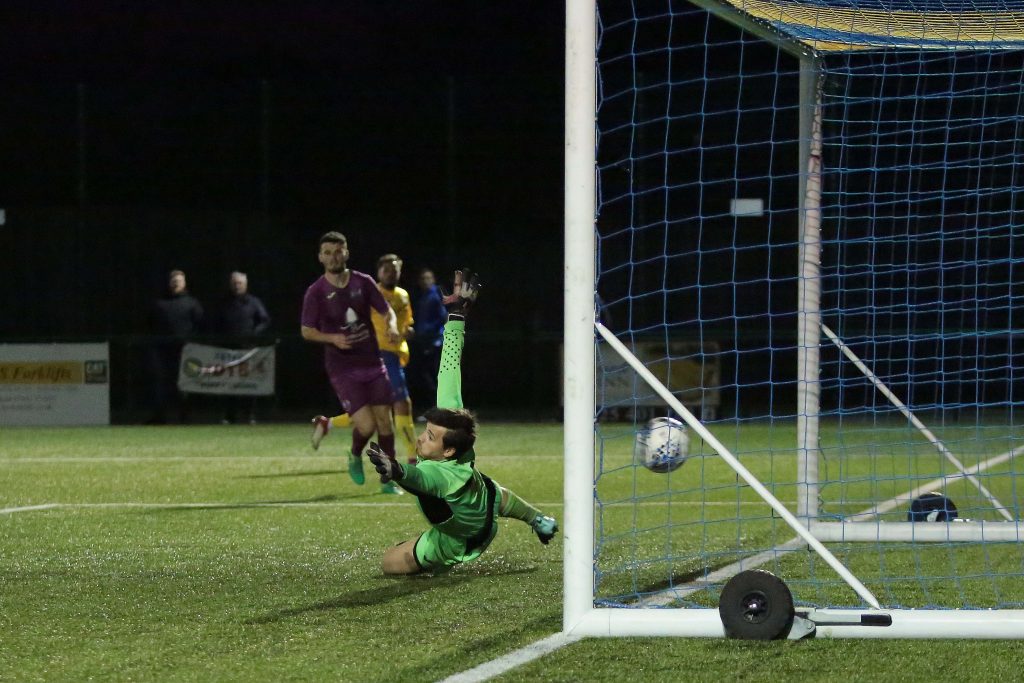 That finally took the wind out of Aycliffe sails and Jackson almost made it 5 following a terrific burst forward by Tom Coulthard who released the ex Spennymoor striker and he twisted and turned in the box before bringing another decent save from Pickford. The resulting corner was met by Nicholson and although not his best effort the ball fell around the penalty spot and bounced up invitingly for Jamie OWENS to pounce and crash the ball into the top corner on the half volley to complete a fantastic display from the imposing striker.FT 5-0

A hugely impressive result and performance against a lively Newton Aycliffe who have also made a good start to the season and worked very hard for the full game, but Stockton showed they have quality all over the pitch, a forward line bristling with goal threat and are a side that are difficult to break down. Aycliffe can also count themselves unlucky to run into an in form Jamie Owens who collected the Man of the Match award from the sponsors.

Three Cup games in 7 days now, starting in West Yorkshire on Saturday and Liversedge in the FA Cup. Lets hope their scouting mission tonight didn’t provide them with the key to inflicting the first defeat of the season on the Anchors.