Stockton Town avoided a Halloween cup scare as they served up a second half treat to progress to the third round of the Brooks Mileson Memorial League Cup with an emphatic 5-1 triumph over Brandon United at the Coverall Stadium.

With one eye on Saturday’s FA Vase fixture, Michael Dunwell made several changes to the side that defeated Ryhope CW at the weekend. It was to be the players he left out that would give the Anchors the impetus to get past their stubborn visitors with Max Craggs and James Risbrough combining for three goals and an assist after coming off the bench.

Despite enjoying long periods of dominance throughout the game, Stockton took only a one-goal lead into the interval through a Mikey Roberts penalty and after suffering an early second half set back, found themselves level with half an hour to play. The Anchors rallied well and a Sonni Coleman header complimented Craggs’ brace and Risbrough’s late strike to eventually seal a convincing win. 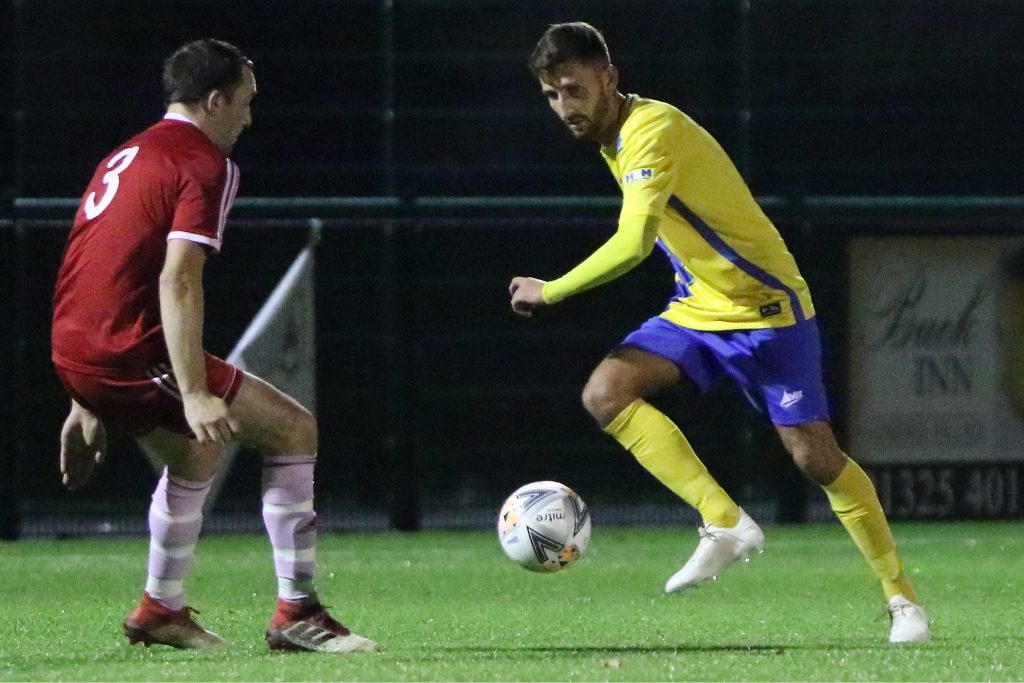 Joe Carter returned to the starting lineup as Michael Dunwell made several chance to his Anchors side.

Given the respective league positions of the sides heading into the game, Stockton would have been expecting to do most of the pressing. This was certainly the case in the game’s fledgling infancy as they immediately assumed the ascendency. Chris Stockton could have given his side the lead inside the contest’s first five minutes. He cut inside from the left and struck a curling effort just over Carl Robinson’s crossbar.

The visitors didn’t commit many forward but were organised in defence and restricted Stockton to efforts from range in the early going. When Stockton did find a way through on 11 minutes, they found Robinson in fine form. Neat interplay on the edge of the area allowed Mikey Roberts to release James Ward on goal. His initial effort was saved well by the Brandon ‘keeper before Coleman headed the rebound wide with the goal at his mercy.

The yellow wave was building as the rain fell under the lights of the Coverall Stadium and soon it was the woodwork that would come to Brandon’s rescue. It twice looked like Stockton had lost the ball down the left but his dogged perseverance allowed him to maintain possession and get to the byline. He pulled his cross back across the face of goal and found the head of Shabs Mohammed. The midfielders header had enough to beat Robinson but was denied by the crossbar.

With Stockton frustrations building, Michael Dunwell’s side really should have been ahead just shy of the half hour mark but saw three glorious chances repelled. An intricate reverse ball from Coleman played strike-partner Roberts through on goal. He connected well with his strike but found Robinson equal to it. The rebound dropped to the feet of Stockton but his shot was cleared off the line before the final opportunity fell to Roberts who suffered the same fate as the visitors were rewarded for their tenacious defending with preserved parity.

The resistance was finally broken three minutes before half time when Stockton were awarded a penalty after Sonni Coleman was dragged down in the area. Roberts stepped up to convert from the spot to give his side a deserved half time lead. The Anchors’ leading goalscorer slipped when he struck the ball in the greasy conditions but still found the corner after sending Robinson the wrong way. 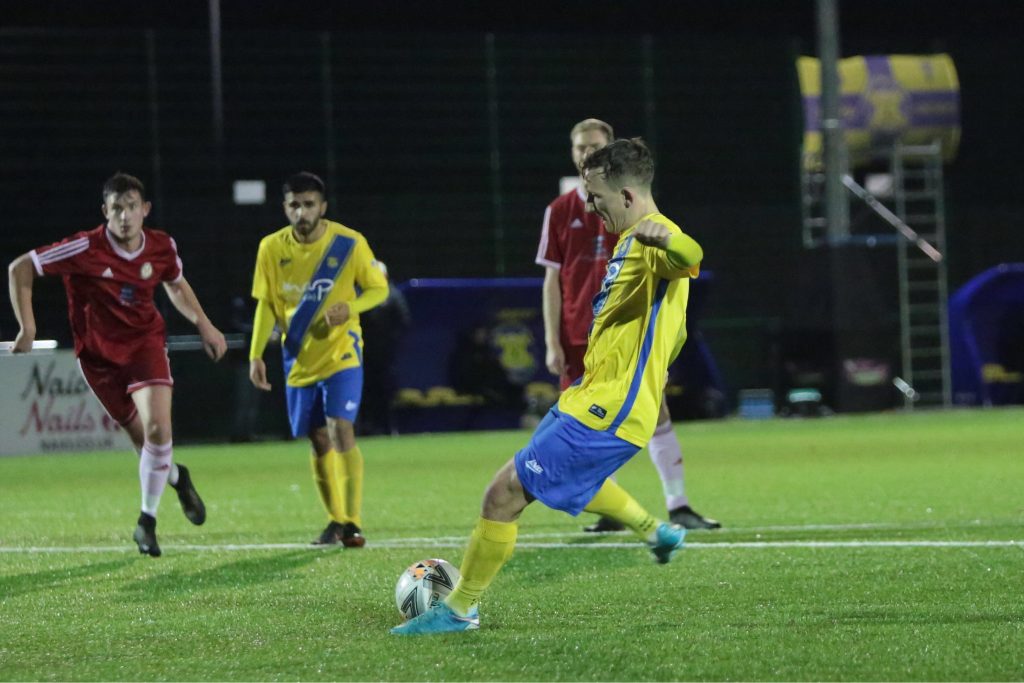 Mikey Roberts broke the deadlock from the penalty spot.

Many would have expected Stockton to capitalise on their lead but they made a sluggish start to the second period and found themselves unable to double their advantage. They paid the price for this just before the hour mark as Brandon equalised in innocuous fashion. Jordan Lee picked up the ball mid way inside the Stockton half. He advanced and struck a seemingly tame effort on goal from 25 yards that found its way past Michael Arthur despite the ‘keeper getting his hands to it.

The cavalry was sent for and after Craggs had been introduced moments before the goal, Risbrough was also thrown into the fray as Dunwell sought a catalyst to get his side firing in the second half. His changes paid quick dividends as Craggs went about changing the complexion of the game.

On 66 minutes, Stockton were level. Craggs picked the ball up just outside the Brandon area and struck a right footed effort goalwards. The shot was deflected and nestled into Robinson’s bottom right hand corner with the goalkeeper powerless to keep Stockton at bay on this occasion.

The goal settled Stockton once again and they began to express themselves and reassert their dominance on proceedings. They twice went close to a third ten minutes later when another Craggs effort from range was denied by Robinson before a stunning last ditch challenge from Jay Nicholson denied Roberts a second when the forward seemed almost certain to score. The Anchors would go close twice more but again found the woodwork to be their nemesis as the post denied both Ward and then substitute Peter Bulmer from securing the win.

The third goal eventually came ten minutes from time and it was Craggs and Roberts combining once more to put the game beyond Brandon. The ball was played into Roberts on the edge of the area and the forward showed excellent touch to set the ball perfectly for Craggs. The substitute unleashed a ferocious drive that whistled past Robinson with venom and cannoned into the net. 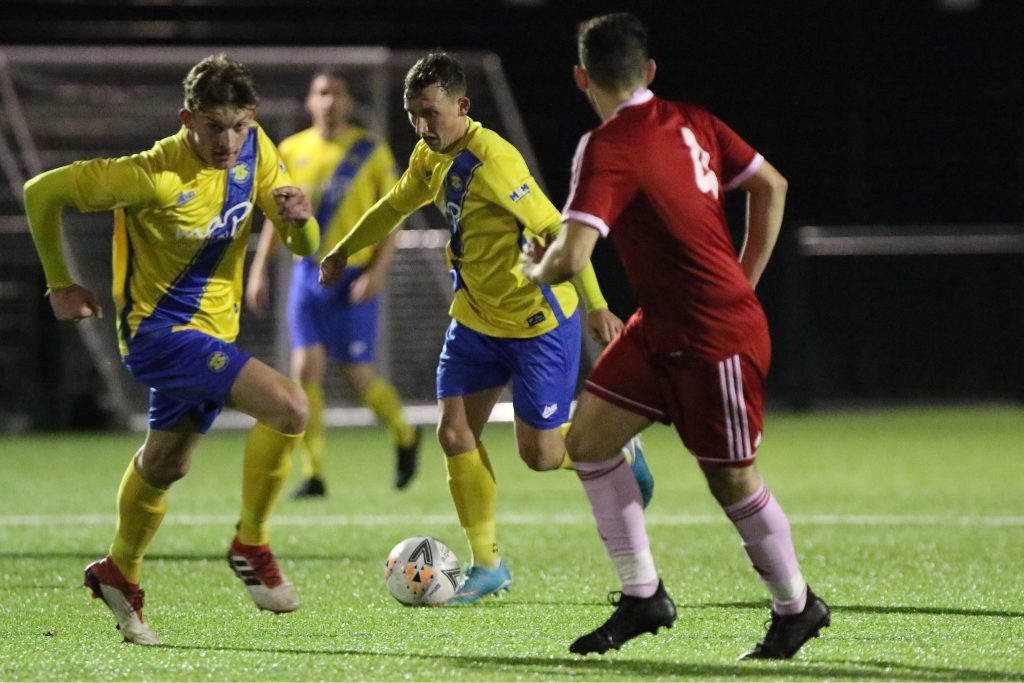 Strike-duo Roberts and Coleman both found the net for Stockton.

Four minutes later, the scorer turned architect as the Anchors found a fourth goal. Craggs, in pursuit of his hat-trick, breezed past Niall Fingleton before shooting at goal. His effort, from a tight angle, was denied by Robinson but the rebound ballooned up and provided Coleman with the simple task of nodding home from close range to extend Stockton’s advantage.

Four became five just moments before the final whistle as Stockton scored through a sensational counter attack. Arthur saved well to deny Lee initially before racing up and releasing a long ball than found the breaking Risbrough with pin point accuracy. The substitute controlled well and cut inside from the right before finishing with a low left-footed strike past Robinson to put the icing on the cake.

The five-goal showing took Stockton’s tally to 21 goals in five games through the month of October and provided a third straight win in all competitions. That form couldn’t have come at a better time as Saturday sees the Anchors begin their FA Vase campaign at home to Ashington. Dare we dream once more?