Stockton Town produced another emphatic, entertaining performance to comfortably take all 3 points against a hard working Benfield side who passed the ball about neatly but hardly registered a shot on target.

Sonni Coleman and Jordan Robinson were unavailable so 17 year old Jayden Gray was called into the squad after impressing in the U18 development team. Mikey Roberts and Kev Hayes were included in the starting line up with James Risbrough rested.

The game started at a good pace, which continued throughout. Both sides moved the ball quickly and with skill but it was the Anchors who had the cutting edge in the game. After just 6 minutes the ball was worked across the pitch to Kev Hayes, who tormented Benfields Novak all night, he jinked inside and past two men, accelerated towards the box and as the next defender stepped out he slipped the ball into ROBERTS path who slipped it under the on rushing Lions keeper Dan Nimmins who had no chance as it nestled in the far corner.

Just 3 minutes later Hayes again wriggled free and stood a lovely right footed cross up but with the goal gaping from just 8 yards out Chris Stockton’s contact on the volley wasnt great and the chance was gone.

Both teams continued to play some nice stuff, but Benfield hadn’t had a decent effort on goal so far, the Anchors did produce shots from Hayes, Nicholson and Woodhouse but they didn’t trouble the keeper.

The one negative of the evening was what looked like a nasty injury to Nathan Mulligan on 28 minutes, he appeared to have damaged his collar bone after his own player, skipper Adam Nicholson, clattered into him as they both attempted to play a ball on the halfway line. After being in fine form this last month or so it will be a big blow should he miss any upcoming fixtures. Joe Taylor replaced Nathan, but only after Stockton had doubled their lead. A long ball was headed on by Max Craggs to the lively Chris Stockton, he twisted and turned inside the box and gave it back to Craggs as he ran around him and the midfielder chipped a lovely left foot cross from the by line to Mikey ROBERTS who rose well to head home for his second of the night. 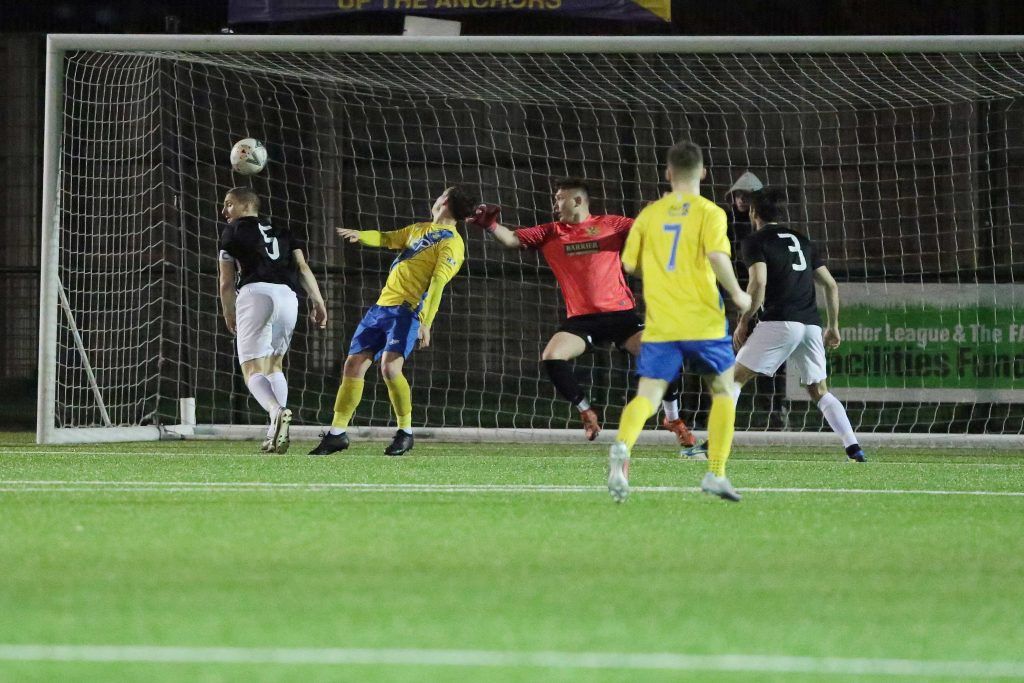 The Anchors continued to look the more dangerous and only a foul by Jake Thompson, which earned him a yellow card, stopped Roberts having the opportunity to grab a first half hat trick, as although a long way out, he would have had a clear run at goal. HT 2-0 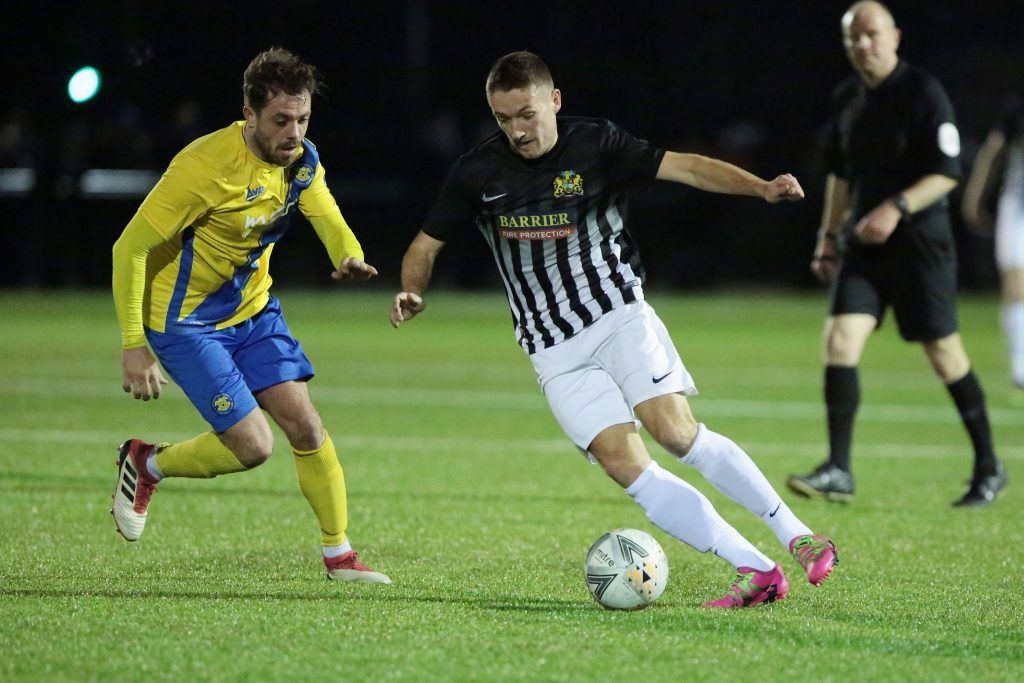 Benfield had obviously had a talking to and came out with more purpose in the second half and a lot more of an aggressive approach, but they were still unable to produce a shot to worry Arthur, which was more down to the excellent Coulthard and Nicholson, helped by Ward and Bulmer and plenty of hard work from the whole team.

The game kicked into life after 68 minutes when Fred Woodhouse just missed clean contact with a pacey free kick from the right hand side and the ball spun out to safety. Two minutes later things looked bad for Benfield as substitute Risbrough broke up an attack and raced up the pitch, just as he was breaking into the Lions half, Reece Noble went to ground and cynically scythed him down from behind. The Ref decided it was worthy of a Red Card despite the Lions protests. On 73 minutes, bad went to worse as a good slick move involving Hayes and Bulmer fed WOODHOUSE who looked to pull the ball back into the danger area only for it to deflect into the net off full back Novak, wrong footing Nimmins to seal the points at 3-0.

The additional benefit of that period for Stockton was that it enabled youngster Jayden Gray to make his debut and as he entered the game with the Anchors in rampant form, it made it all a little easier and he certainly looked the part for the final 15 minutes. 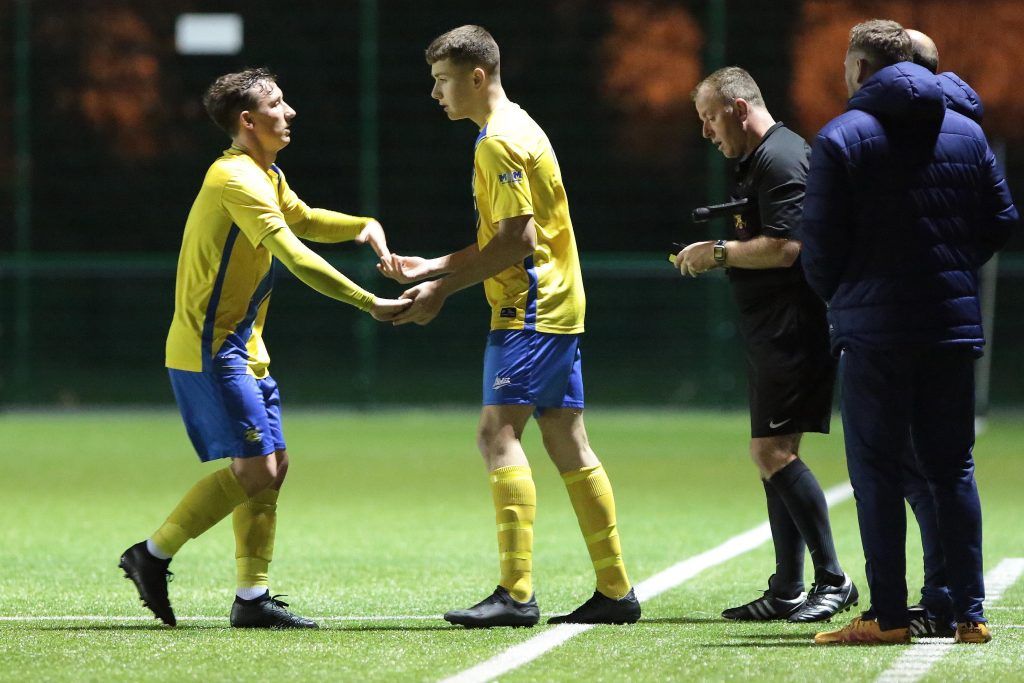 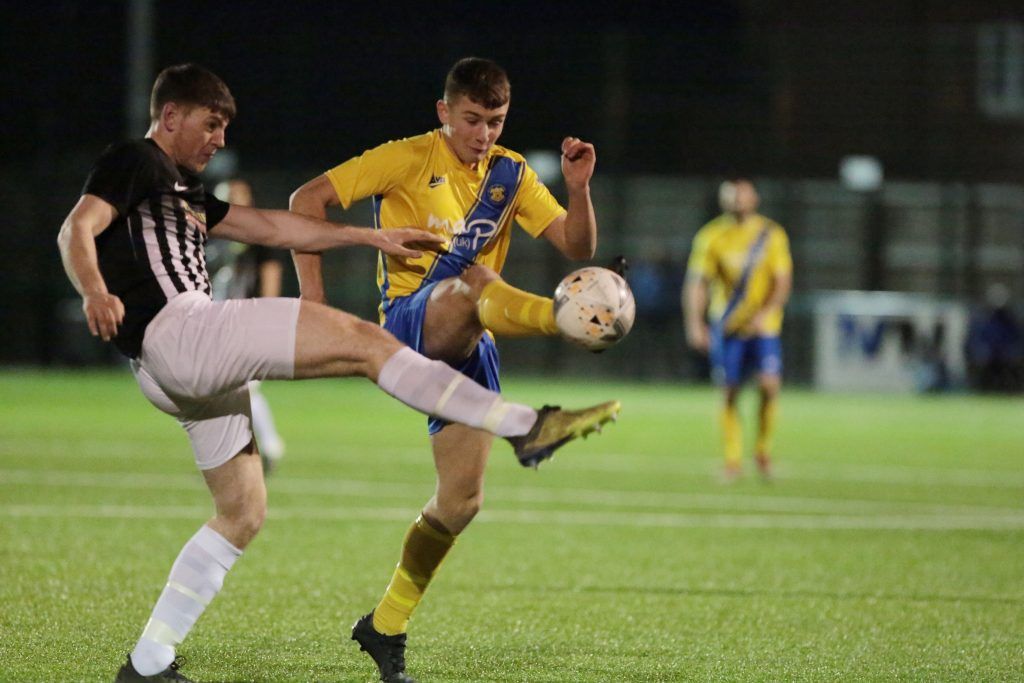 And didn’t look overawed by the experience

A Woodhouse effort flashed just wide and then a traditional Kev Hayes jink inside and let rip with his left foot brought a first class save out of Nimmins as the Anchors swarmed forward and exploited the extra man.

As if Benfields night couldn’t get any worse , their manager was sent from the dugout for, I imagine, trying to advise the Ref on certain matters and within a minute Kev HAYES had made it 4-0 when he smashed home a left foot shot into the bottom left hand corner from 18 yards out. 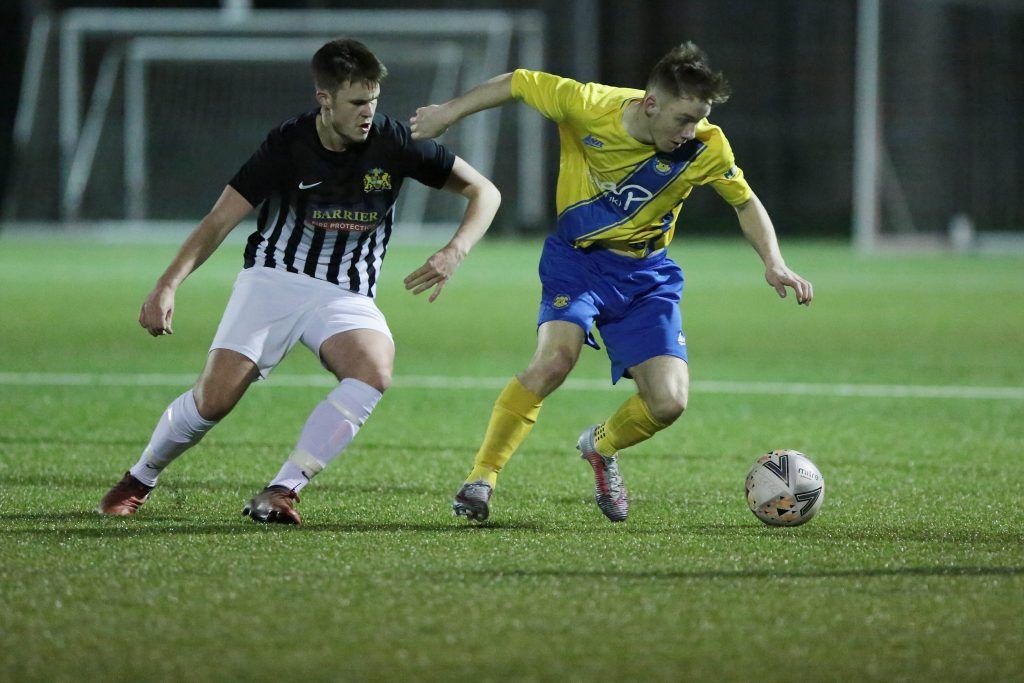 Kev Hayes capped off a fine performance with a late goal.

No more cards or goals in the last few minutes and Stockton saw the game out as worthy winners in an enjoyable game for the big crowd, well most of them. FT 4-0

The Anchors continued their recent excellent form and save for the injury to Mulligan this was a great evening for Michael Dunwell and his men. Everyone contributed tonight. Chris Stockton put in his best display of the season and Kev Hayes looked real sharp and back in that type of form that won him a place in the North East team of the Year last season. Max Craggs is also in a rich vein of form too and Mikey Roberts with two excellent finishes and his usual non stop effort looked like the top class player we know he is and he got the George Bar & Grill Man of the Match award.