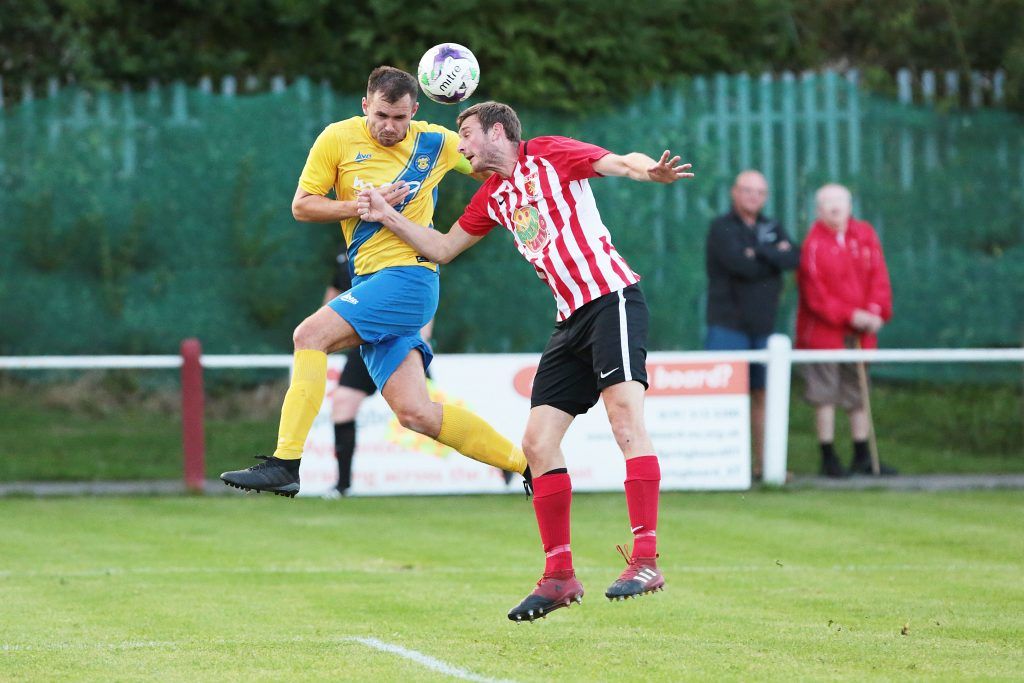 As well as having his captain back, Michael Dunwell was able to call upon James Risbrough once more and Stockton were able to field a back three of recognised defenders for the first time in three games.

The trip to Sam Smith’s Park saw The Anchors looking to avenge their FA Cup exit at the hands of their opponents and they would certainly do that. Nicholson’s brace and the subsequent three points were warranted by the performance and Stockton look to have put a disappointing week well behind them.

Stockton should have broken the deadlock inside ten minutes after a bright start. A Max Craggs corner from the right found its way at the feet of Nicholson, as much a difference maker in the opposition box as his own. His pot shot at goal looked to have Andrew Grainger beaten but he was denied by the post.

A first half bereft of an abundance of clear cut chances saw its best opportunity fall to the hosts on 25 minutes. Excellent work by Scott McCarthy on the right saw him ghost past Stockton and Nicholson. He delivered into the area and found Paul Brayson unmarked on the edge of the six yard back. The veteran forward looked certain to break the deadlock but got his header all wrong and headed wide under no pressure.

Stockton looked to play through the midfield more in this contest than they did at times on Wednesday night but it was a long ball from the back that brought about their next opportunity. Dale Mulligan’s deep ball found Mikey Roberts in the box. The forward chested the ball down to strike partner Sonni Coleman who turned well but was leaning back on his shot and couldn’t keep it down to challenge Grainger.

The Anchors could have been masters of their own downfall five minutes from half time. A poor goal kick from Michael Arthur invited Benfield to race through on goal. The goalkeeper made up for the error, producing an excellent save with his legs to deny McCarthy one on one.

After a scoreless opening 45 minutes, it took Stockton just three minutes more to have the lead. It was little surprise that the goal came from a Craggs set piece. The midfielder’s inswinging corner from the left found the head of Nicholson and he beat Grainger low down to his left to give the visitors a deserved lead.

The Anchors didn’t look to rest on their lead and were worthy of a second. Efforts from Roberts and Craggs both stung the palms of Grainger but once again found the Benfield goalkeeper to be in impressive form.

The biggest threat on the Stockton goal came eighteen minutes from time. Dale Mulligan looked to have won the ball but was reprimanded for the way he followed through in his challenge on Dylan McEvoy. The result was a free kick right on the edge of the Stockton box. Substitute Dennis Knight struck the free kick well but found Arthur equal to the challenge with an excellent stop low to his right.

The home side would be penalised for not making more of the chance just three minutes later when the lead was doubled. Again it was a Craggs set piece and again it was the head of Nicholson that resulted in a Stockton goal. Craggs’ free kick from the right was beautifully delivered and Nicholson’s powerful header beyond Grainger left the Benfield goalkeeper with no chance to prevent the game from ebbing away from his side.

Stockton had the ball in the net again five minutes from time when Coleman rounded Grainger and slotted home but the goal was disallowed. The assistant on the far side ruled Coleman to have taken the ball out of play before slotting home but it would do little to impact upon the final result.

It was a strong return to form from Michael Dunwell’s side who will now be hoping that the form shown today can continue and build consistency alongside consistency in selection.