“We were delighted to take all three points against Marske”, says Nathan Mulligan 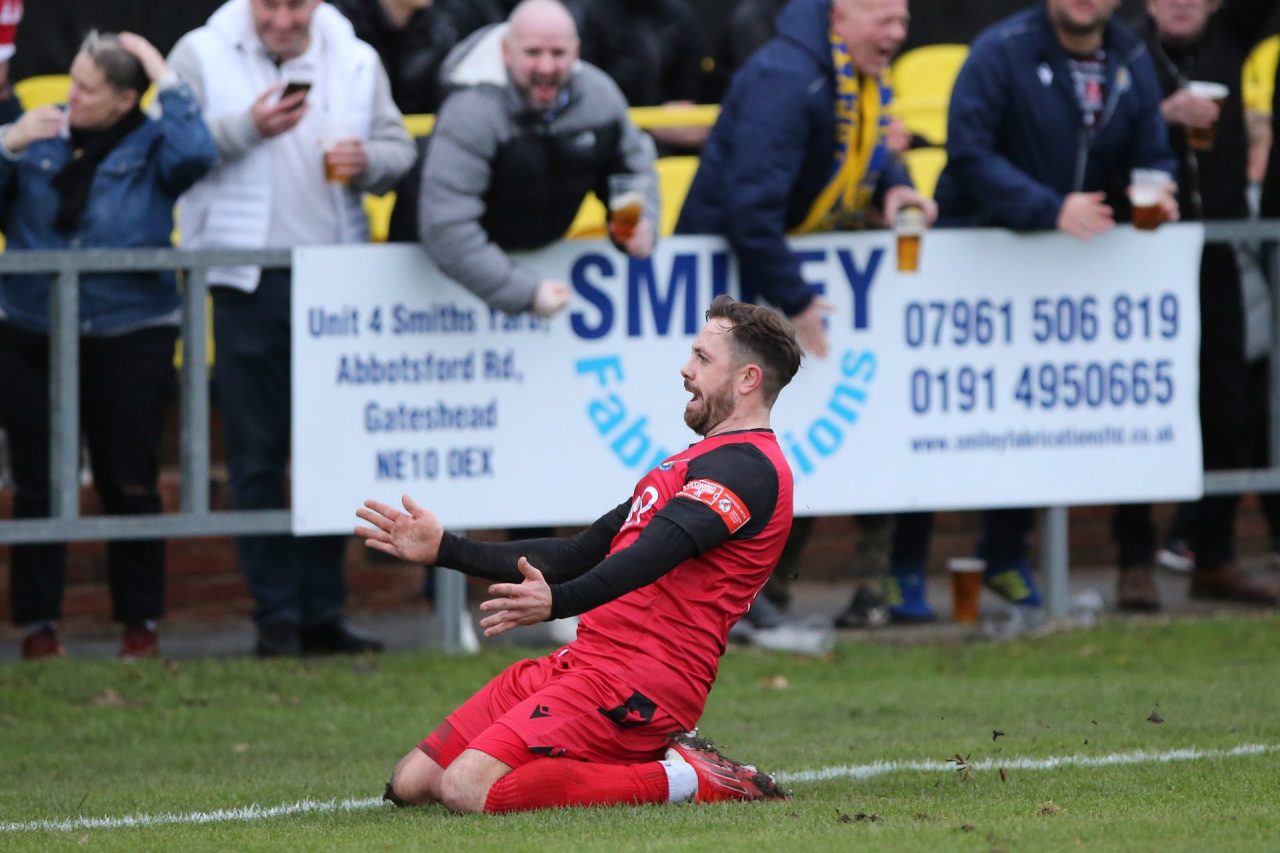 Midfielder Nathan Mulligan says Stockton Town are “delighted” to have emerged from the Teesside derby against Marske United with all three points.

The Anchors fell behind early in the second-half through the league’s top goalscorer Adam Boyes, but responded in perfect fashion as skipper Adam Nicholson lashed the visitors level with his 100th Stockton Town goal.

Mulligan, a second-half substitute in the game, sent the away fans into bedlam as he rounded Ryan Catterick in the Marske goal with less than 10 minutes remaining to earn a vital win for Stockton.

The victory has taken the Anchors up to fourth in the Northern Premier League East, above Cleethorpes Town on goal difference and with a seven point cushion inside the play-off places.

Describing his goal, he felt the move was well worked and the moment felt like it went in “slow motion” as the ball trickled into the net.

“It felt like slow motion when I went past their keeper!”, he said.

“There was a throw in on the right hand side that Jamie [Owens] flicked inside, I was stood only a few yards inside of Kev [Hayes] who received the ball from Jamie and I saw their centre-half move towards Kev so I called for the through ball.

“He played a fantastic through ball in behind and their ‘keeper came rushing out, I could have just shot past him but instinct came to me to take it round him and slot it home which is exactly what I did.”

The victory at Mount Pleasant was Stockton’s sixth win in a row in all competitions, and the second game in succession in which Dunwell’s side battled back from a second-half deficit to earn all three points.

The result was Marske’s first league defeat on home soil since 2019, and the first time Stockton have ever won at Mount Pleasant in their second attempt.

Mulligan praised the Anchors performance, stating he believes the side won the midfield battle and were good “all over the pitch”.

He said: “We’re absolutely delighted, especially with it being a local derby and with the way Marske are flying in the league.

“It was good to go there and put in a really, really good performance. I thought we out-battled them,  I know they had a few good chances and we had some really lucky escapes with some great saves from Callum [Roberts], overall I thought we were fantastic.

“I thought we won the midfield battle”, he continued. “I thought everywhere on the pitch we were really really good.”

A narrow 3-2 victory over Brighouse Town followed which moved Stockton into the play-offs, then came a 4-1 thrashing of Hebburn Town and a come-from-behind win against Stocksbridge Park Steels.

The Anchors will end the year in fourth position, seven points ahead of sixth place, which Mulligan describes as a “great feeling”.

He said: “At the beginning of December, we looked at the league table and we were just outside the playoffs, we’d take that in December. From then on, we’ve just kicked on and we’re just trying to cement ourselves in them playoffs.

“All it takes is one good month and you’re right up there, that’s exactly what we’ve done, we’ve now won six games in a row and it’s a great feeling.

“That’s what happens when you go on a winning run, it breeds confidence, i’ve said many times before. The more we win, the more we feel confident and want to win again.

“I think that’s the key, it’s trying to keep this winning momentum going and we saw on Monday, the way we battled for each other and kept that winning run going.”

Over six hundred Stockton fans made the short trip across to the Teesside coast to Marske.

The official match attendance of 1,250 was the highest league crowd Stockton Town have ever played in, and manager Michael Dunwell described the atmosphere created as a “cup final feel”.

Mulligan echoes that sentiment and says the support gives the players are massive boot whenever they step out on the field.

“They were mint, honest to god”, he commented.

“That little corner where they were all stood there signing was absolutely fantastic. We buzz off that. I know the fans that come and enjoy the whole Stockton Town experience, enjoy it when we’re playing well but we enjoy it when the fans are like that.

“That’s what gives us that extra push, the old saying goes that the fans are the 12th man but that’s exactly what they are, they help us massively.

“On Monday, that’s exactly what they did. We couldn’t wait to score and celebrate in front of them and that’s what we need every single game.

“Whether they’re behind the goal in the stand singing, if that’s packed on Saturday it’s going to help us massively against Shildon, so fingers crossed for a bunper crowd on Saturday.”

“Jump on the Stockton Town bandwagon, it’s a fantastic place to be. The amount of people that come to games, everyone knows everyone. You walk around that ground when it’s full and you know 50 people. It’s a great club to be involved in and I just hope more and more fans come to support the team.

“Our football club is a community, and it starts with the fans and goes right through the players, management and committee. It’s a chain and if one link breaks and it’s not as good as what it should be.

“When everybody’s all together, it’s magnificent to be a part of.