Our Under 12’s managed by Tom Ward claimed a Trophy win in the Redcar Town Tournament at the weekend.

Following an early defeat on the day 1 0 to Lumley FC the boys came roaring back with a 6 0 victory over Burnopfield, a 2 0 win over Redcar Town Hitachi and a defeat of Hebburn Town 1 0.

Into the Semi Final and goals by from Sean Earl and Leon Griffiths secured a 2 0 victory over Saltburn Athletic Seahorse and gave the lads a spot in the Final.

The Final brought a 1 0 victory over Burnopfield with Dion Earl grabbing the vital goal. Well done to all the players and management from everyone at Stockton Town, a fantastic achievement. 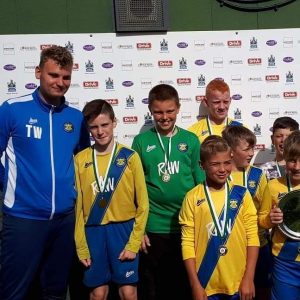