The return of fans will be a “massive boost”, says captain Adam Nicholson 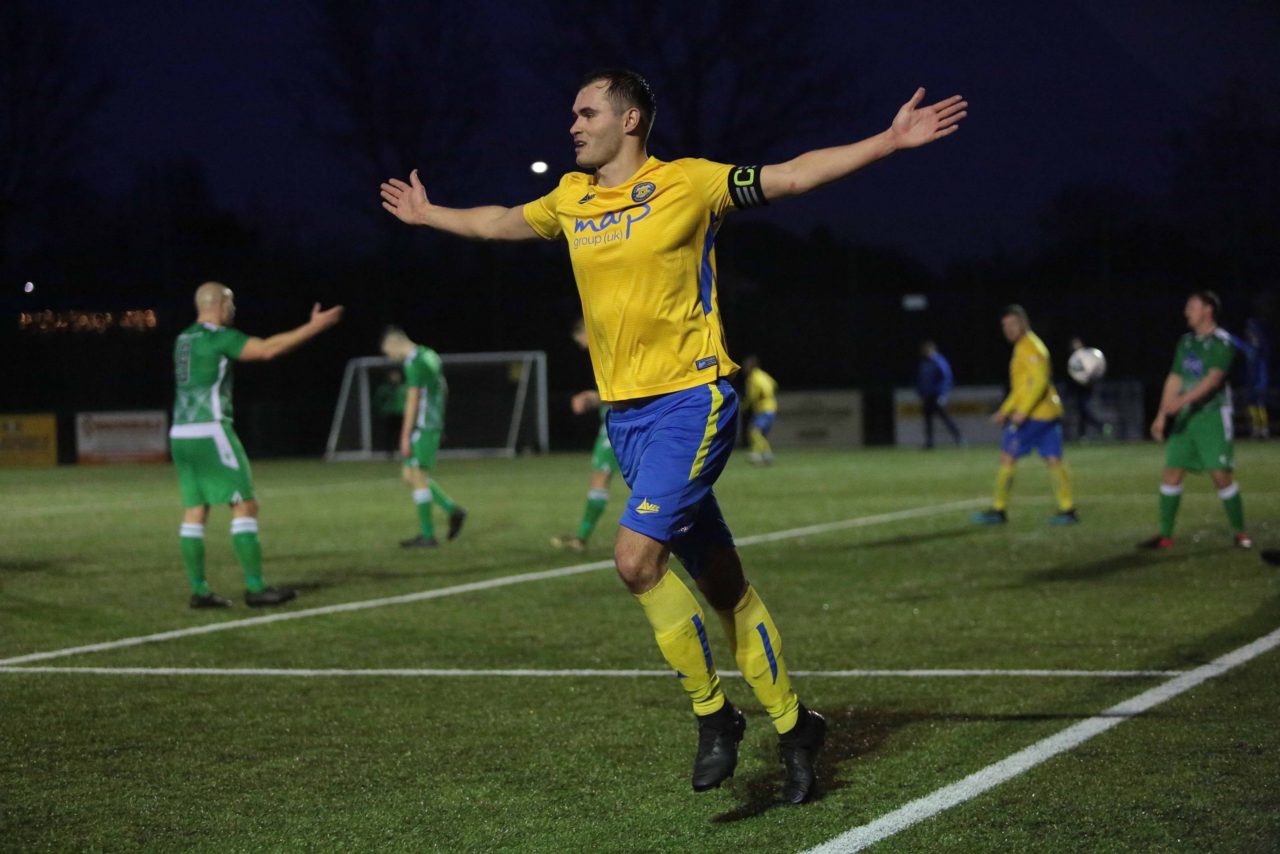 Stockton Town captain Adam Nicholson believes the return of supporters to games from next season will be a “massive boost” to the football club.

The Anchors averaged over 500 fans at the MAP Group UK stadium during the 2019/20 campaign, and set a club record league attendance of 940 during the 1-0 win over Thornaby on Boxing Day 2019.

However, owing to restrictions due to the Covid-19 pandemic, Stockton Town were limited to attendances of just 150 and 300 during the 2020/21 campaign, including having to play their FA Vase Second Round tie against Charnock Richard behind closed doors.

The Government roadmap has planned for the return to life without restrictions from June 21st, 2021. With the 2021/22 season not due to start until August, it is hoped that there will be no limits to attendances in non-league football from next season and the skipper believes it will be a massive boost to the players.

“It’s massive [the return of fans]”, Nicholson revealed. “One of the worst parts about playing under restrictions was the first few friendlies behind closed doors, it was brutal.

“As soon as we started getting some fans back, it did make a difference but if they were to open the floodgates, it would be great for the club and also the lads.

“During the 2019/20 season we were approaching 1000 [fans in attendance] at some games, averaging over 600, the place was rocking, it would be good to get that back straight away.

“If we can do that in the pre-season this coming season, that would be great.

“Of course [we noticed the lack of atmosphere], it was a bit dead and there were not even any handshakes when going onto the pitch. It was a strange set-up to get used to.

“It did affect us in certain ways, when you’re used to the reactions and noise, good and bad, from the crowd being there, it motivates you in different ways.

“It was just one of those things we had to get used to and we did eventually, but we would love to have the fans back in full capacity, to be able to back us as much as they do.”

The Anchors were in second place, five points behind league leaders Hebburn Town when the 2020/21 season was curtailed by the Football Association in February.

Michael Dunwell’s men had not played a league game since November 3rd, 2020 and were only twelve games into the campaign when Non-League Steps 3-6 were brought to an early end.

And Stockton Town’s record appearance holder believes the season was too short to draw any “meaningful conclusions” from the league table.

“Ten or twelve games in a season, you can’t judge the final standings”, he added.

“Yes, we were up there and there were a number of teams in and around us all on similar points, there’s no doubt that it was too early to say whether the standings would have been the same or different at the end of the campaign.”

The proposed restructuring of Steps 4-6 of the National League System was originally pencilled in for the 2020/21 season, but plans were put on hold after the 2019/20 campaign was declared null-and-void, resulting in games played during that period being expunged.

Crucially, the 2020/21 campaign remains curtailed, meaning results during that period officially stand and can be used towards the potential restructuring ahead of the new season, but the 28-year-old is cautious about the news.

“The restructuring made sense when it was proposed for the 2019/20 campaign, he said. “The work was done on our side to get that promotion, sadly it was put to one side once the season was declared null-and-void.

“Now they’re reviewing it again for this season, I’m not holding my breath, we will have to see.

“It does make sense for obvious reasons, with the pyramid system they’re looking to put in place.

“However, how they do that with last season being null-and-void and this season only being curtailed, it’s a funny one, we will just have to wait and see.

“There is, however, precedent from the women’s game”, he added. “Teams were promoted based on structure and finances, along with performances on the field, after last season was declared null-and-void. Whether that happens in the men’s side, I’m not sure.”

Nicholson, who passed 400 appearances for the club in November, believes Stockton Town have the experience to adapt to a higher division if the club is promoted to Step Four.

“We’ve got players who have played in that league or higher”, the defender said. “Players like Shane [Henry], Nathan [Mulligan] and Mikey [Roberts] have the experience so it’s not completely unknown.”

“It wouldn’t be easy, teams like Marske and Dunston have been promoted from our league and have taken their time to adjust, but we’ve also seen teams like South Shields and Spennymoor Town rise through the leagues.”

“If we retain the squad and add a few more players I don’t see why we wouldn’t compete.”

Should the Anchors remain in the Northern League for the 2021/22 season, the defender insists his side will be challenging for the league title and aiming for a run at the FA Vase.

“That’s the bar we have set ourselves”, Nicholson admits. “It came as a bit of a surprise to some people [the 2019/20 Northern League season], but now we are there to be shot at, like last season.

“We were at the top and on form that season, we were the team to beat and that isn’t going to change, our target if we remain in the Northern League is to win as many trophies as we can.

“Being the team everyone wanted to beat threw up different challenges for us, teams were coming to us playing for a draw and making it hard for us, we’ve got to adapt to them kind of teams.

“We knew that teams were setting up to be hard to beat, that’s all part of being at the top, you see teams doing the same against Liverpool and Manchester City in the Premier League, it’s our job to find a way to win each game whether home or away, against an attacking team or defensive team, the top teams do that.”

It was three years ago this week that the Anchors qualified for the FA Vase final with a 3-2 aggregate win over Marske United, and the 28 year-old shared his recollections of that famous day.

“I think I said on YouTube or BBC many times that it was “unbelievable”, Nicholson recalls. “That was my word of the day I think!”

“It was a very special day, one that I’ll never forget, I’ve never seen an atmosphere like it, especially when Nathan [Mulligan] scored the equaliser from the spot to restore our two goal aggregate advantage. Going in at half-time, the roar from the crowd was absolutely unbelievable.”

“Michael [Dunwell] was in the changing room at half-time trying to keep us all calm, but we knew we were 45 minutes away from Wembley. There’s a few highlights from that day, it was a special day and one that will live long in the memory.”

“Marske were a top side that year and they won the Northern League at a canter, we did a job on them over the two legs and got our rewards for it, every man in the squad were top drawer.”

With competitive football not set to return to the MAP Group UK stadium until August, Nicholson has a message for Stockton Town fans and the people of Stockton.

He said: “If you’ve been before, enjoyed the games and maybe missed out due to restrictions; we will soon be back.

“We are a couple of months away now, the lads we will be back training, hopefully in June/July we will have some big pre-season friendlies that everyone can come to and the bar will hopefully be back open.

“The key motivation for us is to come back in the best shape possible so that, regardless of what league we are in, we can give it our best shot and give the fans something to cheer about as it has been a tough year for everybody.”