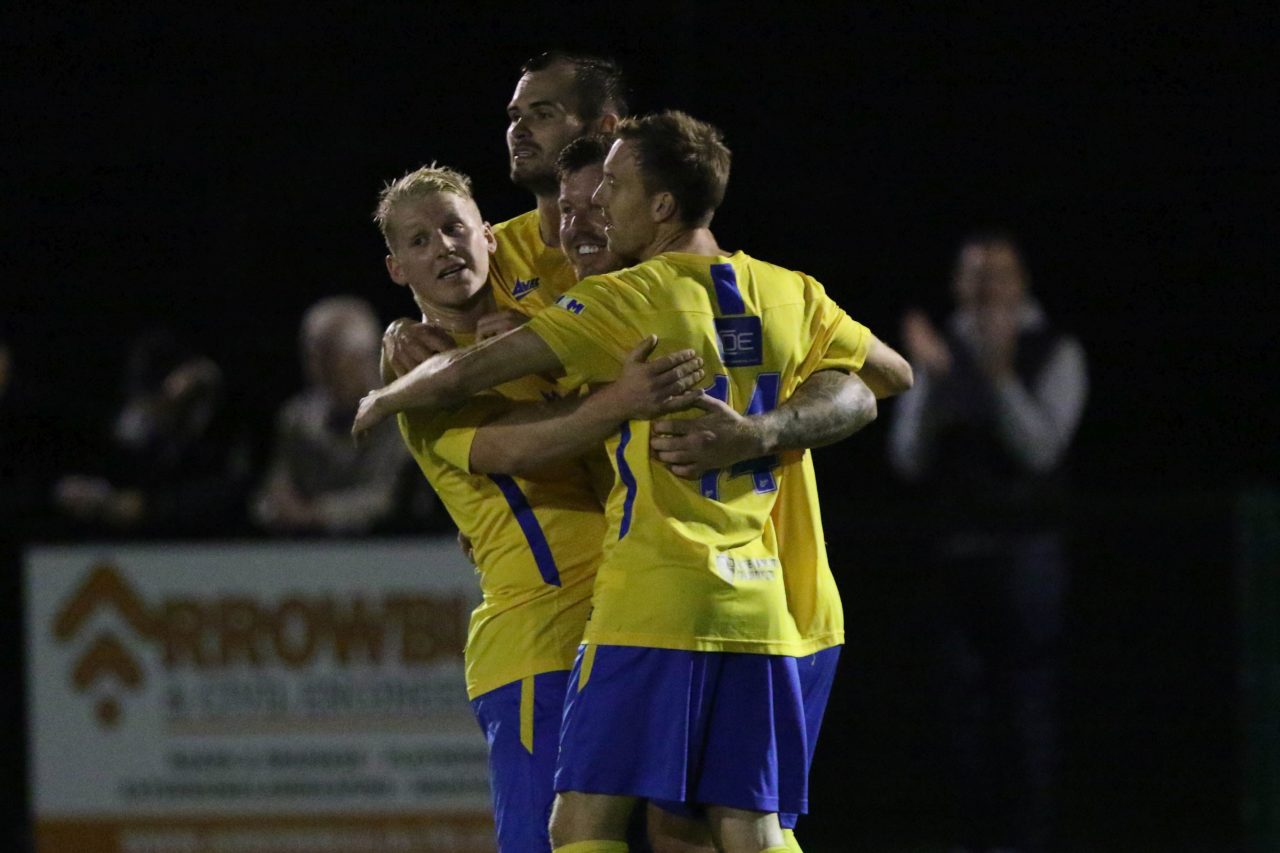 Its a funny old game Football apparently. This match seemed to be in the hands of North Shields at half time as they’d looked the most likely to score in the first half and Stockton were down to ten men. But the Red card for a rash challenge by Callum Roberts seemed to be the catalyst for a terrific display of fast flowing attacking football and defensive resolve and in the end Stockton were disappointed not to have won by more and further to that have their run of clean sheets ended only by a dubious Refereeing decision.

Kev Hayes was restored to the side and Mikey Roberts was fit enough to be on the bench alongside the returning Bulmer and Wilson. Another good crowd was looking forward to an entertaining game.

There was no sign of the excitement to come during the early exchanges, as predicted North Shields were set up to deny space, press the ball and stem the flow of the Anchors to their forwards and to be fair they did it well, their mobile midfield and forward players were quick to pounce and they were organised and knew their roles.

The first real action was a Robins corner on 17 minutes which Roberts came for but couldn’t reach and Ormston met it at the far post but headed it wide. The Anchors were knocking the ball about nicely but when it broke down North Shields were breaking quickly and two minutes later Cunningham had a shot deflected just wide.

As the two sides cancelled each other out a little, Stockton continued to probe and create space but the Robins were making inroads, a good move involving Campbell set Cunningham free and his shot was well saved by Roberts, the resulting corner dropped to New in the box and Nicholson made a block to keep out his effort at goal.

Owens headed Kings cross just wide on 44 minutes and from the clearance a sloppy ball from Nicholson was intercepted on the half way line by Patton and he raced towards the goal with Anchors defenders in pursuit, Callum Roberts came out to challenge but the pace of Patton was always going to cause a problem when meeting him head on and Roberts brought down the Robins midfielder just outside the box and was shown a Red card as last man.

The second half was a complete contrast, more open and lots of goal box action, the Anchors settled for two banks of four with the lone striker in their attempt to give the makeshift keeper protection. This inadvertently tipped the game in the favour of Stockton as their attacking players now found the space to play in as North Shields opened up and began to pass the ball around and the Anchors picked them off with some scintillating attacking play in a 20 minute spell.

This was sparked off in the 50th minute by the mercurial James Risbrough who’s dummy and turn, in one sweeping movement left Cassidy for dead and he sped into the box, crossing towards OWENS who ‘claimed’ the goal amongst a tangle of defenders legs to stun the Robins.

Five minutes later and a corner fell to Nicholson who’s first effort came back off a post and the rebound was cleared off the line, the ball was recycled and HAYES cutting inside jinked around the defender in the box and shot low down to Purvis’s right hand to make it 2-0.

The Anchors faithful were still buzzing as Owens twisting and turning inside the area was fouled and the Ref pointed to the spot. The normally reliable Nathan Mulligan ruined his 100% penalty record as he seemed to change his mind mid stride and sent the spot kick sailing over the bar and let the Robins of the hook a little.

The game was a great watch now as both teams went at it, North Shields thought they’d got a lifeline when a free kick into the Stockton box was headed by Carr over the stand in keeper Craggs but Nicholson acrobatically hooked it off the line and away to safety. Then the Anchors raided down the right with King and Bulmer drew a free kick out wide which was sent in by Mulligan to find OWENS steaming in at the far post to head past Purvis 3-0.

The irrepressible Risbrough was tormenting Cassidy and another electric raid down the left saw him pull the ball back to Owens who’s efforts to scramble it home were just stopped by a combination of Purvis, Ormston and New. Lewis King was just as effective on the right and his delightful curling pass set Bulmer away and clear but Purvis raced out and managed to get there first to avert the danger.

The ten men Anchors understandably tired a little in the last few minutes and North Shields grabbed a consolation when the referee deemed Coulthards ‘tackle’ to be a foul and the resulting penalty was saved by Craggs legs but unfortunately for him fell back at the feet of the taker BAINBRIDGE who made amends. Right on full time the North Shield legend again in the action when he got on the end of a cross but Craggs managed to get a fingertip on it to push it onto the bar and it was scrambled to safety. FT 3-1

It was a great display of attacking football by the Anchors in the second half, they looked unhappy and lacking a little spark in the first period but once the first goal went in no-one noticed the lack of a player and their energy levels were superb. A brilliant rear guard action with Coulthard, McWilliams and King involved in everything and Portas and Mullligan working their socks off in front of them keeping North Shields to long range efforts, special mention too for a super display in goal by stand in Max Craggs.
Everyone gave to the cause, Owens and Risbrough especially (who got the sponsors man of the match) were unplayable in the first 30 minutes of the second half not only providing respite for the defence but creating several opportunities and kept the Robins on their toes, punishing them when they got the chance. A victory that looked unlikely at half time but more than deserved by fulltime. Onto Guiseley this Saturday and FA Cup glory perhaps, they love an underdog in the FA Cup…