It is with a heavy heart that we have to inform you that Alan Cossavella has decided to retire from playing football after too many seasons to remember playing Northern League football. Alan joined Stockton Town in our Wearside League days from Billingham Town having been a friend of Michael Dunwell for many years as teammates.

Alan made his debut for The Anchors in a 7-0 win over Boldon CA on 7th December 2013. Alan has played 211 games for Stockton and while Alan is not a prolific goal scorer he has found the net on 10 occasions.  The most memorable of those was his injury time winner away at Thornaby a couple of years ago on the Club’s way to winning the Northern League Division 2 championship and he certainly enjoyed that one.

Alan was Player of The Year in the 2014-15 season which is a credit to his influence on the club and the team during his time here. Alans last appearance for Stockton was at Whickham on the 14th December 2019. However the highlight of Alans career will always be his  role in taking the Club to the 2018 FA Vase Final, a truly special memory.

Manager Michael Dunwell had this to say, “myself and Alan spoke on the phone a couple of weeks ago and it was an emotional evening for us both when Alan told me of his decision, but what can we do but respect all he has done for the Club over the years.”

Club Chairman Martin Hillerby paying tribute to Alan said, “Alan has obviously played a huge part in our Clubs progression in recent years that I would like to thank Alan for on behalf of us all at Stockton Town. However on behalf of every Club Alan has played for, Chairman, Managers, teammates and supporters I would also say thank you on behalf of all those as well. Alan has been invaluable at whichever Club he has played and he will certainly be missed but we are sure we’ll be seeing Alan and his family about in the coming years.” 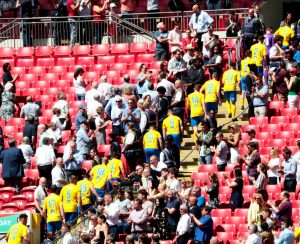 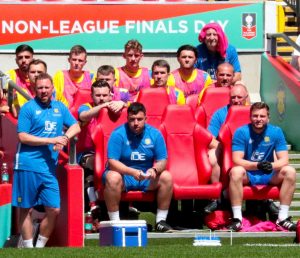