Played Boro Rangers in the last match of the season at Rockliffe in the TJFA League Cup Final. Unfortunately conceded a goal  from a free kick after 2 minutes and although the lads worked really hard they were chasing the game from that point on with Boro Rangers eventually running out 9-1 winners. The lads had had a long hard season and had a really hard run in for their last 10 matches including 2 cup semi-finals and The Durham Cup final, which they won convincingly 6-3.  A great season where they only failed to win one league game against Boro Rangers, which means they finished runners up to Boro Rangers who finished on equal points but had a better goal difference. In the Durham Cup they have now competed for the last 2 years in it and not lost a game over 90 minutes, only getting beat in last years final in a penalty shoot out. Well done and looking forward to 2019/2020 season.

Played our last league One  match against Darlington 21st All Stars with a resounding 9-2 win. This result meant that we won all our matches except for the home match against Boro Rangers. The final table shows us on the same points as Boro Rangers but as they had a superior goal difference they finish as champions and we, are for the 3rd year running are Division 1 runners up. Well done the Lads as they have displayed determination, skill and sportsmanship in all the matches they have played.

Our Last match of the season is  Tte TJFA League Cup Final which will be played at Rockliffe on Sunday 19th May 2019, K.O  at 1.00 pm against Boro Rangers. 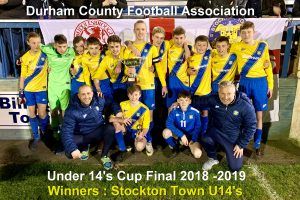 After the disappointment last year, in the final of the same competition (at U13), when they were beaten in a penalty shoot-out, the lads made sure this year with an emphatic win against a strong Golden Flatts side.

Things didn’t look good when they went 2 goals down in the first five minutes. They then rolled up their sleeves and took control and were 4-2 up at half time. They scored very soon after the re-start to go 5-2 up but then a harsh penalty decision made it 5-3. They quickly responded with another to make it 6-3. It was a very wide pitch and they all did well to keep going and work hard for the full 70 minutes.

A thoroughly deserved victory by a team who have the will, the skill, and resolve to win. 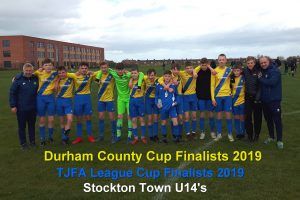 We have reached the TJFA League Cup Final after beating Golden Flatts 2-1 in a thrilling match at their ground.

We also play Golden Flatts in the Durham County Cup Final on Thursday 28th March 2019 at Billingham Town, Bedford Terrace TS23 4AF with a 6.30 kick off 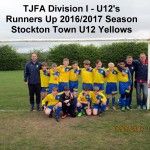 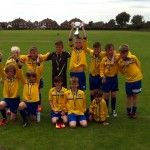 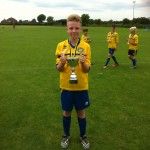 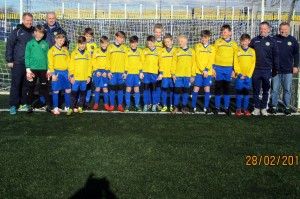 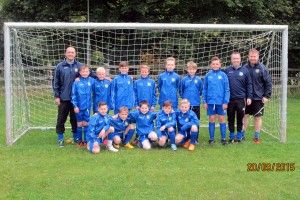 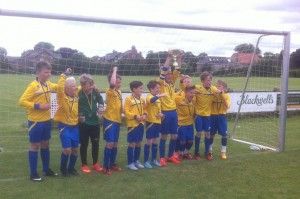