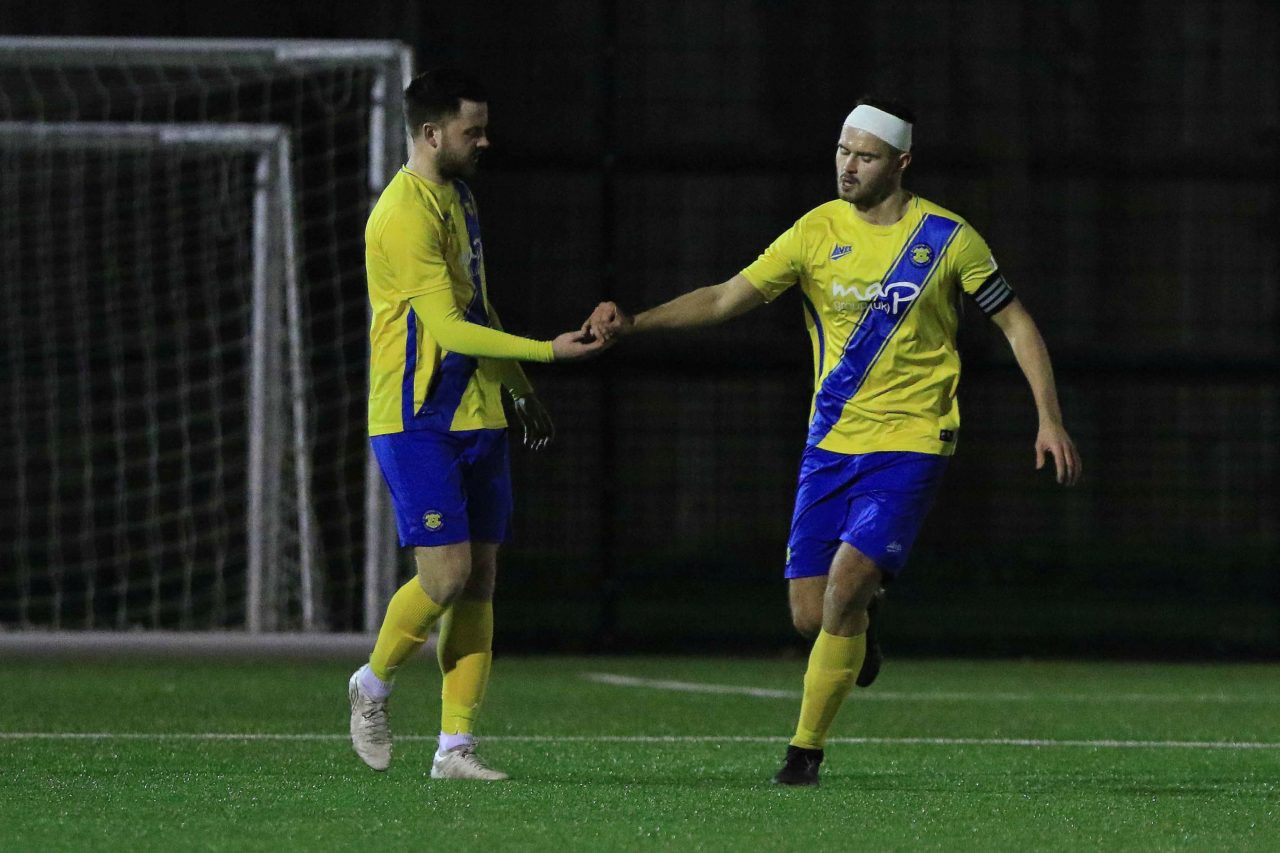 Stockton’s hopes of finishing the season with a cup final were ended as they fell to a 3-2 defeat at home to West Auckland in the League Cup semi-final.

Two goals from skipper Adam Nicholson, his third and fourth in two games, were not enough to get his side over the line against a West Auckland side that boasted some of the bigger names in North East non’league circles.

Stockton made an excellent start to proceedings and led as early as the sixth minute. Max Craggs sent over a telling corner and the bandaged head of Nicholson, still recovering from his efforts at the weekend, rose highest to nod the ball beyond Shane Bland.

The goal brought the visiting side into life and they had two chances to draw level through Anthony Bell and Amar Purewal but neither could find the net. The equaliser eventually did come in the 27th minute when Bell’s shot from the edge of the area wasn’t held by Michael Arthur and Liam Hegarty slid the ball into the empty net to restore parity.

Stockton should have retaken the lead five minutes later when Cragg’s headed flick on sent James Risbrough racing through on goal. With Bland caught in two minds over whether or not to come out, the chance was there for Risbrough to loft the ball over the ‘keeper and into the net but he didn’t quite get hold of his effort and struck it straight at Bland.

The next goal was always going to be key and it went the way of West Auckland ten minutes after the restart. Bell again caused problems down the left before fizzing a low ball across the face of the Stockton goal. It was met by Purewal and the former Darlington forward made no mistake in dispatching the ball high into Arthur’s net.

The visitors could have been out of sight as the second half progressed but were denied twice by two excellent saves from Arthur. First, he repelled substitute Alex Francis’ curling strike from the edge of the are at full stretch low to his left. Then, just over ten minutes from time he denied Purewal a second with a sensational one-on-one save.

The winner eventually came just a minute from the end. Ste Snaith released Francis through on goal and the winger slotted the ball under Arthur to send his side into the final.

Such is the nature of this Stockton side, they fought to the end and actually wrestled a speculative route back into the game in the second minute of injury time. Again it was Nicholson on the scoresheet as he connected with a Mikey Roberts cross to halve the arrears.

It wasn’t enough for Stockton and they couldn’t find a dramatic leveler in the closing moments as the referee’s whistle signalled it would be the visitors to the Coverall Stadium who would progress to Easter Monday’s final.