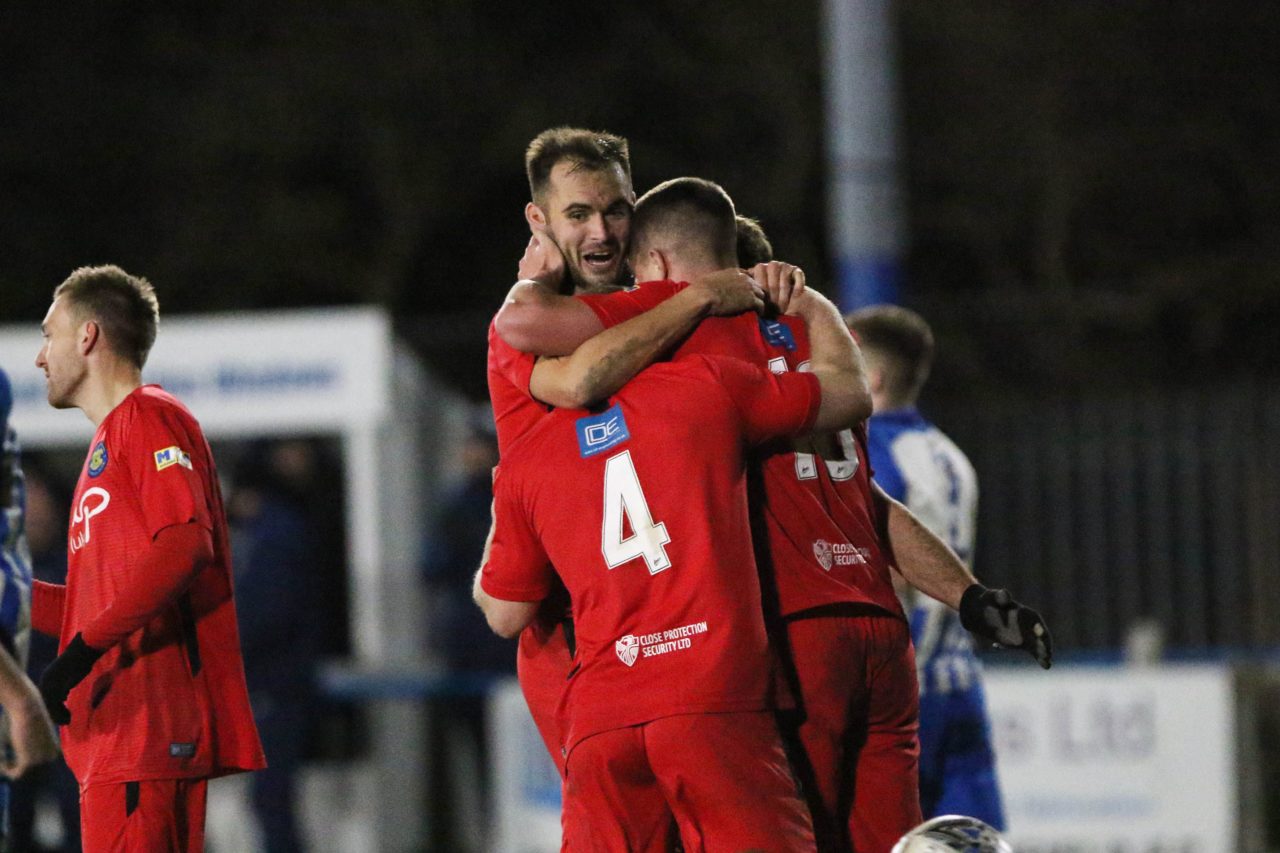 Steel is mobbed by his team mates after scoring on his debut.

The Anchors staged a late rally to win at Newcastle Benfield tonight in a hard fought affair on a tricky surface.

An own goal and a debut goal from new signing Nathan Steel both in the final ten minutes saw Stockton claim a vital three points and set up what should be an entertaining clash with the League Leaders on Saturday.

Both teams came into game on the back of a free weekend due to fixture postponements and it was the home side that had the better chances early in first half and veteran striker Paul Brayson managed to craft himself a good opportunity using the defender as a blocker he curled a shot that seemed destined for the inside of the side netting but Callum Roberts made an excellent save low down to his left.

In the 16th minute some great work from Benfields James Novak saw him play it to Peter Glen-Ravenhill who broke free into the box but saw his effort flash across the goal and past the far post.

It was becoming a scrappy affair, the pitch wasn’t helping and the Anchors were finding it hard to string anything of substance together despite the effort and as it broke down Benfield were breaking well and causing problems, Ben Richardsons long ball found Glen Ravenhill again in space but as the pitch held the ball up Nicholson got across and stopped the attack.

Stockton were growing into the game and finished the half the better, they kept a move alive with some quick passing and the ball was pulled back to Owens but his shot from 18 yards was over the bar.

A free kick on the half way line was sent in by Portas and was headed down across the box, Mikey Roberts latched onto it but Varga blocked his shot well at close range. HT 0-0

Early in the second half Stockton continued to improve and had another attempt when a freekick was cleared to Tom Coulthard who sent his half-volley just wide.

Shortly after that on 56 minutes came what was to be a pivotal moment in the game when a Benfield corner was cleared by Mulligan and Cyril Giraud collected the ball 20 yards out and fired in a curling shot which had goal all over it, the effort brought out the very best from Roberts as he made a fantastic acrobatic save palming it away right handed as it flew towards the top corner, the ever alert Coulthard blocked the follow up and cleared.

Stockton made changes and they started to work some better positions, Nathan Mulligan’s free kick into a dangerous area was headed straight at the goalkeeper, then the breakthrough came finally, in the 81st minute and it was slightly fortunate, Kev Hayes near post corner caused confusion and the ball struck a Benfield defender and wrong footing the keeper rolled almost apologetically into his own net.

Buoyed by that, the Anchors looking to defend the lead actually found more space available now and enjoyed their best spell Nathan Steel on his debut had a half chance just blocked and then in the second minute of injury time he sealed the win and showed a touch of class when he turned inside then cut outside onto his right foot and shot low into the bottom corner past the goalkeeper. FT 0-2

Not pretty but 3 points on the road against a decent side is always a good thing, 7 games unbeaten and back to back league wins for the first time since September will provide real confidence going forward to Saturdays showdown with Hebburn.

Callum Roberts takes MoM for two saves out of the top drawer but there were several good efforts tonight on a tough surface against a dangerous side.