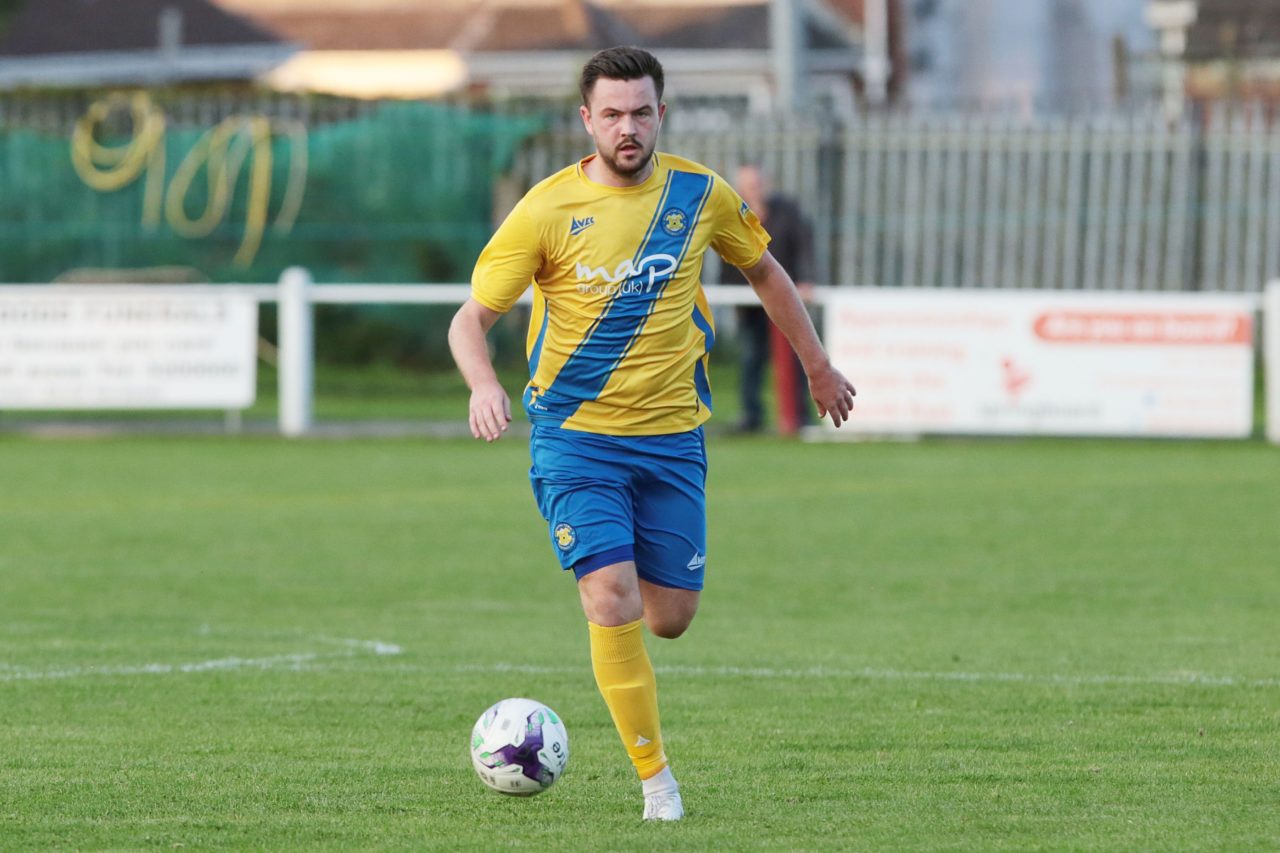 Stockton Town fell to a second consecutive defeat as Bishop Auckland prevailed 2-0 at the Coverall Stadium on Wednesday night.

Goals from Chris Winn and Andy Johnson sandwiched a penalty miss from Michael Hoganson on what would prove to be a disappointing night at the office for The Anchors.

Michael Dunwell made four changes to the side which lost at North Shields on Saturday. Wing backs Pete Bulmer and Chris Stockton were available again and replaced Joe Carter and Matthew Garbutt. Dale Mulligan’s return from suspension saw him fill the void left by the unavailable James Risbrough, whilst Nathan Mulligan came in for Jake Petitjean.

Chances were at a premium in the early going but it would be Bishops who would fire the first warning shot of the game. Niall McGoldrick fed a perfectly weighted through ball for Kyle Patton to bear down on goal but his near post strike went wide and into the side netting when he would have been better advised shooting across Michael Arthur.

Stockton’s first effort on goal came in the eighth minute when Bulmer offered a glimpse of the attacking capabilities that have caught the eye in his fledgling tenure in the yellow and blue. He beat two men and cut in from the right but shot wide with his unfavoured left foot, having not quite connected as he would have liked.

It would prove to be a short lived return to the starting eleven for Bulmer. He limped off with an injury just a quarter of an hour into the contest and was replaced by Carter.

The home side’s best chance of the half fell to the man they would have hoped. Dale Mulligan’s cross from deep on the right found Mikey Roberts in space in the area. The in-form forward was unable to get his header on target and a good chance drifted wide of Nick Liversedge’s right hand upright.

It would be the closest The Anchors would come in the first half and they would end the opening stanza on the end of a Bishops barrage that threatened the game’s opening goal with a glut of chances.

The visitors hinted at what was to come just after the half hour. An intelligent backheel from Patton fooled everyone down the left and played in Winn. He squared an inviting ball across the goal but a crucial intervention from veteran stopper Alan Cossavella cleared the danger.

The torrent of pressure built with the ball flashing across Arthur’s goal once more. Patton, the architect of all things creative for Bishop Auckland throughout, was once more at he heart of the move. He curled a low cross across the face of Arthur’s goal that was mere inches away from the lunging Winn.

The Anchors were unable to stem the tide and the chances kept flowing for the visitors. First, Winn was allowed the space to swivel and shoot over in the area before Hoganson wasted their best chance of the half. The skipper stepped up to strike a free kick from the edge of the area but his low, left-footed drive dribbled innocently wide of Arthur’s goal. The referee’s whistle allayed the pressure and the hosts had held on to secure a scoreless first 45.

Stockton began the second half in a more convincing manner than the way they concluded the first. Fred Woodhouse tried his luck from range and saw his deflected effort loop just wide of Liversedge’s right hand post.

The Anchors’ best chance of the game came six minutes after the restart. Sonni Coleman pounced on a loose ball down the left and advanced into the area. With only one man to beat and with Roberts unmarked in the middle, Coleman failed to find his strike partner with the pass and a glorious opportunity went begging for the hosts.

Chris Stockton would try to put the disappointment out of Anchors minds when he went close moments later. The visitors were unable to clear a Max Craggs corner and the ball rebounded to Stockton. He hooked the ball goalwards but found Hoganson in position to clear off the line.

It would be as close as Town would come all night and the away side recovered from the brief spell of pressure to mount their own push. They should have broken the deadlock on 57 minutes and would have had it not been for a moment of brilliance from Arthur. He pulled off a smart stop to deny Winn initially and then reacted instinctively to block what seemed to be an inevitable goal on the rebound. It was a stunning double save from the Stockton Town ‘keeper.

Arthur’s heroics maintained his clean sheet only temporarily, though, and the deadlock was finally broken on 64 minutes. Winn did tremendously well to keep the ball in play wide on the left. He exchanged passes with Patton before racing through on goal and giving Arthur no chance with a right footed shot that flew into the far corner.

Winn was proving to be a handful and he could have had a huge say in putting the game out of Stockton’s reach 13 minutes from time. Carter lost the ball on the halfway line and in chasing back, felled the forward in the area to give Bishops a penalty. Hoganson stepped up but Arthur continued his heroics by saving the spot kick low to his left to maintain The Anchors’ fleeting hopes of rescuing the game.

Those hopes would be dashed in the 84th minute when the visitors doubled their lead and sealed all three points. Jordan Robinson, seeing his first competitive action in a Stockton shirt, turned into trouble and was dispossessed midway inside his own half. Bishops sent substitute Johnson racing through on goal and the forward arrowed home the sort of clinical finish that once made him the division’s top goalscorer.

It was what the visitors deserved on an off-night for Michael Dunwell’s side under the lights. The Anchors will be looking to return to winning ways and gain revenge over their FA Cup conquerors when they travel to Newcastle Benfield on Saturday.