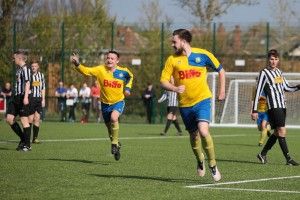 The Anchors begin their third season in the Northern League with a tough trip to Dean Street.

Just over a week after the 3-1 defeat to Thornaby in the final pre-season friendly, Stockton will look to get over any potential ‘Wembley hangover’ with a strong start at Shildon.

Arguably one of the hardest games of the season, Shildon will fully expect to be challenging for promotion to the Evo-Stik league in the coming season. The Railwaymen battled well last season to finish third under Daniel ‘Bobby’ Moore who was in his first full season in charge.

The Shildon team has changed slightly since last season. Goalkeeper Nick Liversedge has left for Bishop Auckland and has been replaced by former Seaham Red Star and Jarrow Roofing shot stopper Shaun Newbrook. Striker Adam Burnicle and midfielder Sam Hodgson have both joined Morpeth for their Evo-Stik journey. Coming in for them is a face familiar to Teesside football in striker Daniel Earl and Ben Trotter who has arrived from Newton Aycliffe.

Top forward Billy Greulich-Smith still remains with the team after committing his future to the club for a further two years.

Shildon’s pre-season campaign ended last Saturday when they thrashed Long Eaton United 5-0 at Dean Street. Their competitive season began on Tuesday as they defeated Dunston UTS on penalties in the JR Cleator Cup. They were brought in as a late replacement for Marske United, who did not have enough players registered for the game.

Stockton’s record against Shildon has been a poor one since they entered the Northern League. The clubs first met in the League Cup in 2016-17 with Shildon running out 3-0 winners. In the league last season Shildon completed the double over Stockton, winning 2-0 at the Coverall Stadium and 3-0 at Dean Street.

The Anchors will be without new signing Jordan Robinson along with Fred Woodhouse who is still a week away from recovering from an ankle ligament injury. Other new signings Pete Bulmer and Mikey Roberts will be pushing to make their competitive debuts. Max Craggs, who was ruled out of the FA Vase final with a knee injury, could make his return to competitive action.