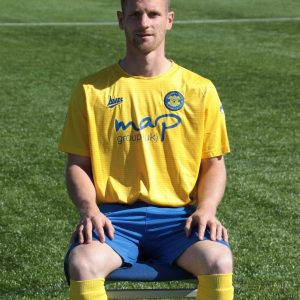 Jonathan started his football journey at Stockton Town when it was still ‘Hartburn Juniors’ before moving into Middlesbrough’s Academy at 11 yrs old. He also represented England at International level from U15s through to U20s.

Franksy started his career as a professional footballer straight from school at Middlesbrough FC and has since played for Hartlepool Utd, Oxford Utd, Yeovil, Wrexham and Ross County in the Scottish Premier League where he won the Scottish League Cup in 2016. For the past two seasons he has played in the Icelandic Premier League for IBV Vestmannaeyja and featured in the Europa League for them.

Jonny is quick, two footed and technically very good, he can play anywhere in the forward line but usually in a wide position and can score and make goals.