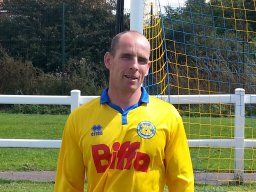 Another Gary Hinchley signing for the Club from local rivals Wolviston FC. Goes by the nickname “Porky”. Porky has previously played for a number of local sides including Guisborough Town in the Northern League.  A winger in his early days Porky has been employed in both a right back and right wing back role for Stockton Town. Without doubt the fittest member of the 1st squad whose running ability is legendary amongst the squad.