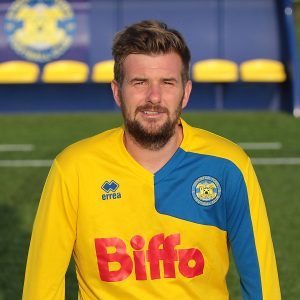 Club Captain ‘Stav’ is another with a wealth of Northern League experience. He joined us in 2012 and with over 200 appearances for the club he has probably been our most influential player throughout the campaign to gain promotion from the Wearside League lifting the League Championship trophy 4 times. An all round, strong, hard working, goal scoring midfielder who plays a vital role in both penalty boxes and possesses a healthy goal scoring record. As Club Captain he leads by example both on and off the pitch and has been instrumental in the development of some of the younger members of the squad.