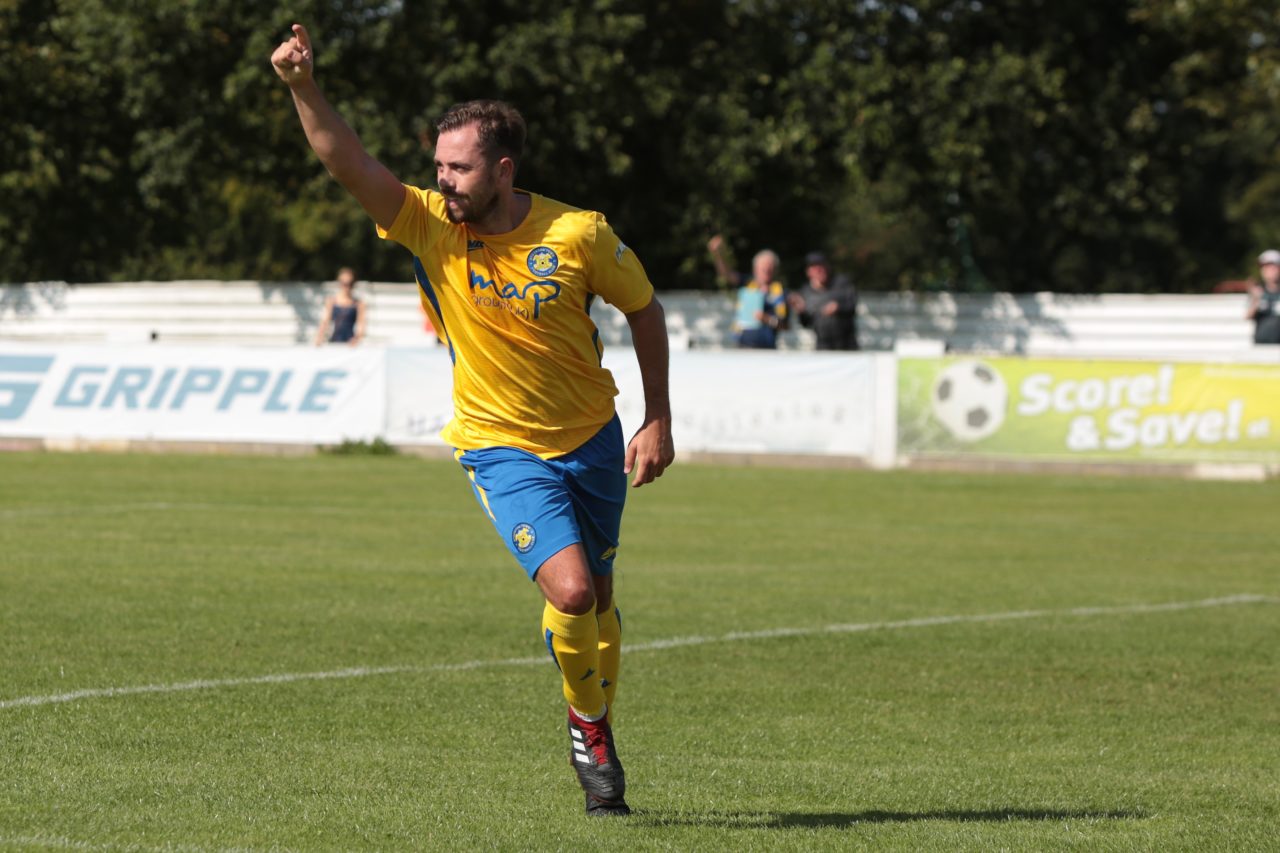 Stockton Town sealed their passage into the next round of the FA Cup with a comprehensive 3-0 victory over Northallerton Town at the Calvert Stadium.

The Anchors were dominant and controlled proceedings throughout as a Nathan Mulligan brace and a Karl Hewitt own goal confirmed their place in the hat for the first qualifying round. 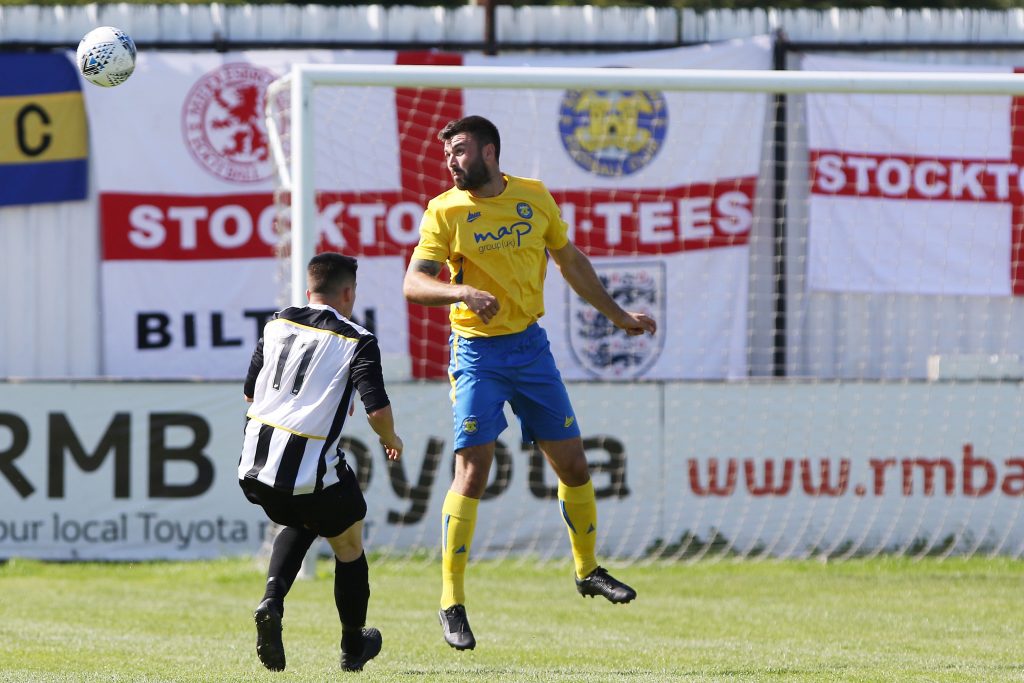 Stockton started much the brighter of the two sides and could have led inside the game’s opening five minutes. Dan McWilliams gained possession on the left and cut inside before playing a reverse ball to Jamie Owens. The striker shot instinctively but his effort was well blocked by Northallerton skipper Daniel Jones.

The hosts responded well and carved out an opportunity for themselves a quarter of an hour into the game. Shaun Hudson beat Tom Coulthard to the ball on the halfway line and raced free down the left. He squared a low ball across the face of goal to Nick Martin but the Stockton defence recovered well to nullify the chance.

Having been warned, The Anchors reassumed their control of the game and it never relented. They could have broken the deadlock twice with a pair of chances for James Risbrough. First, some intricate passing on the right created an opportunity for Lewis King to send over a cross. He found Risbrough at the back post but his header failed to test Thomas Dawson. The second came when the winger cut in from the opposite flank and struck a curling effort from range with his left that hit the target but was comfortably held by Dawson. 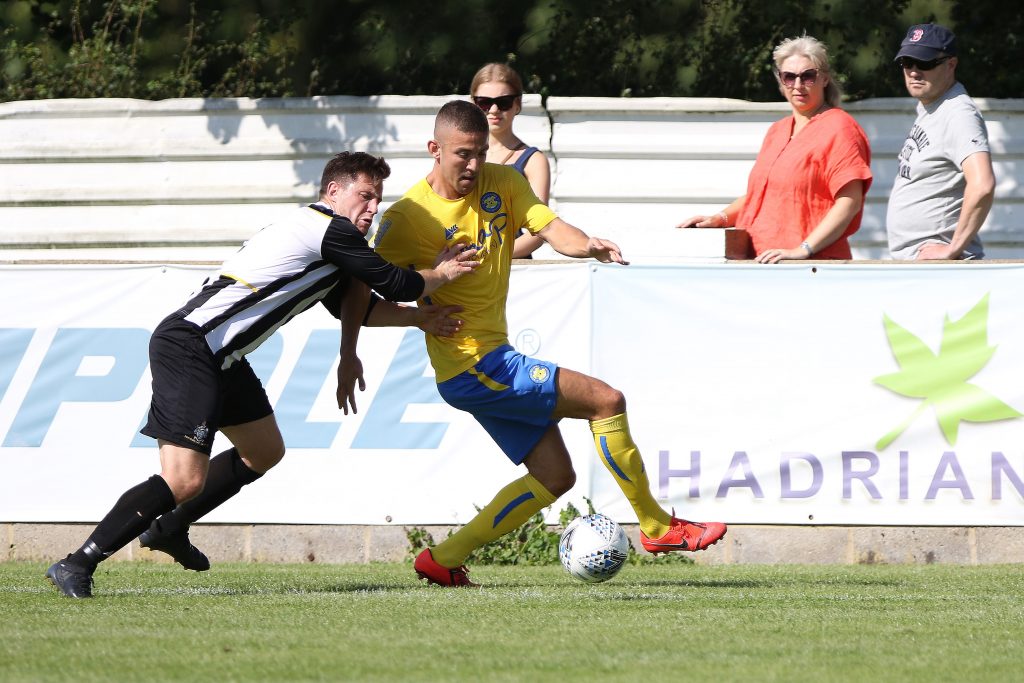 The opening goal eventually came just before the half hour. Mulligan was fastest to react to a ball over the top and beat the onrushing Dawson to the ball. He calmly poked the ball beyond the Northallerton goalkeeper and into the net for his first of the season. 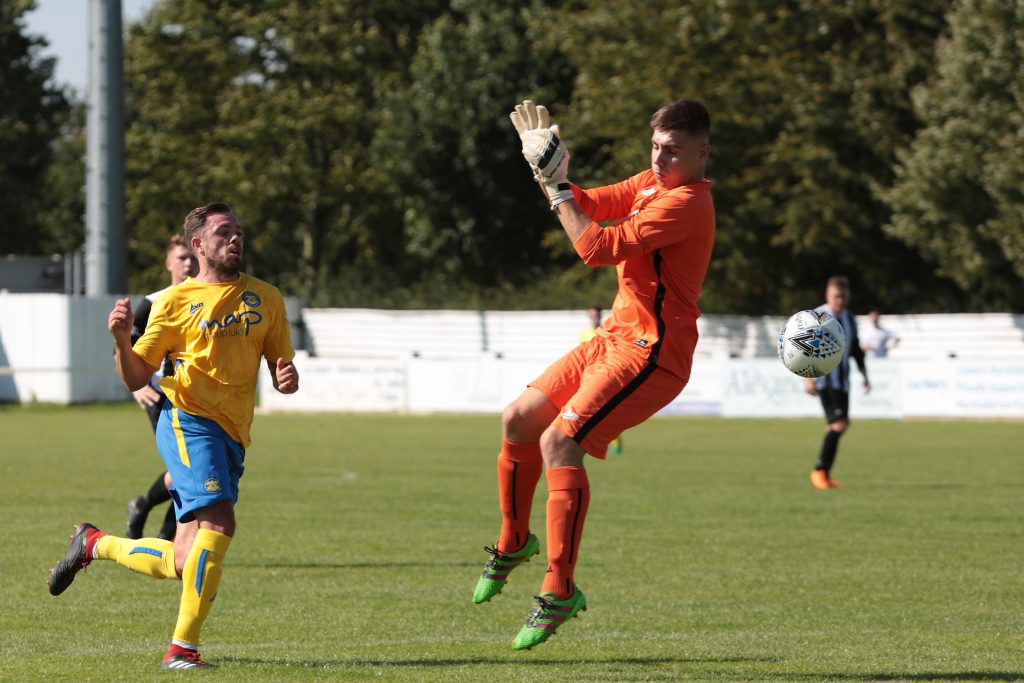 The game was a landmark fixture for Anchors captain Adam Nicholson as he pulled on the yellow shirt for the 350th time. He came agonisingly close to marking the occasion with a goal as well. Max Craggs returned to the Stockton starting line up and that inevitably brought a threat from set pieces. On this occasion he sent over a telling delivery from a free kick on the right and as he has so many times in his 350 Anchors appearances, Nicholson rose highest to meet the ball. His header had Dawson stranded but couldn’t beat the crossbar and the lead stayed at one. 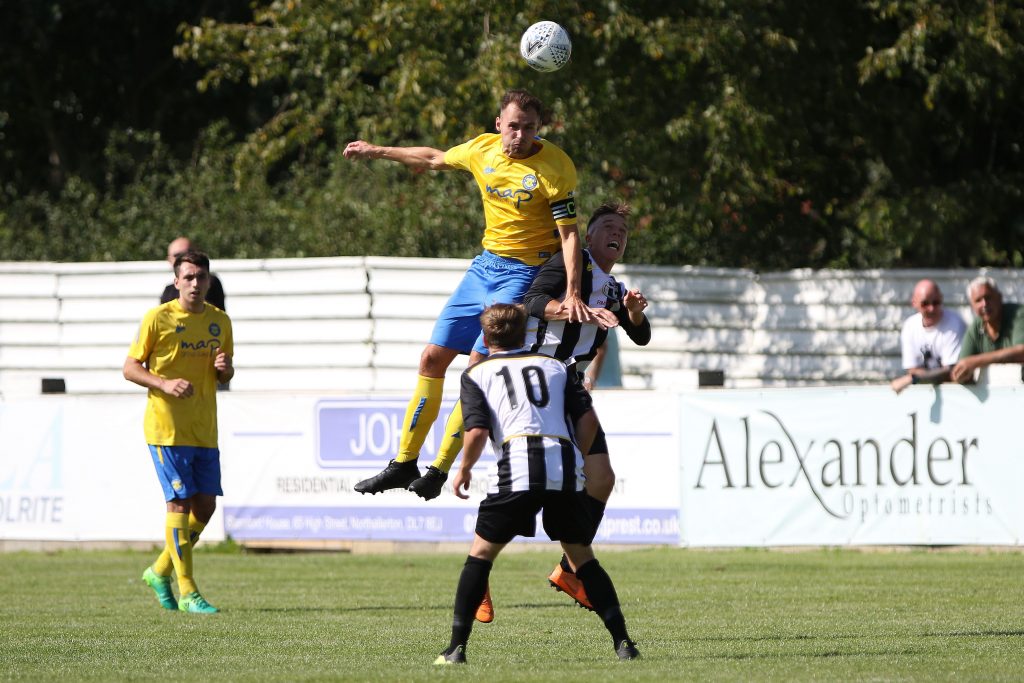 The lead could have been erased altogether just moments later as the home side were left to rue their own luck with the woodwork. Nathan Callender’s effort from distance seemed ambitious but it had Callum Roberts beaten before thundering down off the crossbar and into the arms of the grateful Stockton ‘keeper.

The frame of the goal had barely stopped shaking and the Stockton lead had been doubled. Owens received the ball in the Northallerton box and struck a low left-footed drive towards the near post that beat Dawson but struck the upright. Mulligan was on hand to turn the ball home and ensure his side had a more comfortable lead at the halfway stage.

Stockton were frustrated to be denied a golden opportunity to put the game to bed just seven minutes after the restart. As Mulligan raced through on goal in search of his hat trick, he seemed to be brought down by Dawson, all eyes went the way of the officials but they waved the claims away much to the chagrin of the Stockton fans, who had travelled in excellent numbers once again. 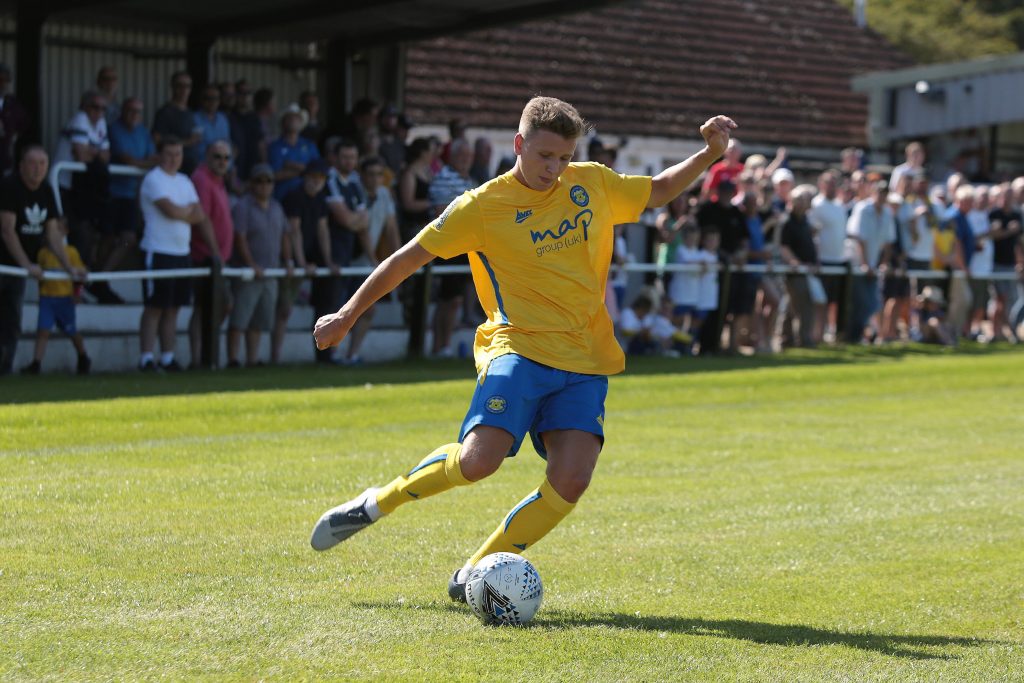 They were not to be frustrated for too long as a third goal came just a couple of minutes later. The goal went from the sublime to the ridiculous as Risbrough demonstrated wonderful skill and an impressive turn of pace to leave David Hillerby in his wake down the left. He drilled the ball across the face of goal and the home side failed to clear as the ball cannoned off the helpless Hewitt and beyond Dawson for Stockton’s third.

To the home side’s credit they kept fighting and did come close twice in the game’s closing stages. Hillerby’s free kick from the edge of the box was struck with pace but Roberts dealt with the strike with the minimum of fuss. In the final few moments, Martin demonstrated his acrobatic prowess as he met a cross with a stunning overhead kick that rose just over Roberts’ bar. 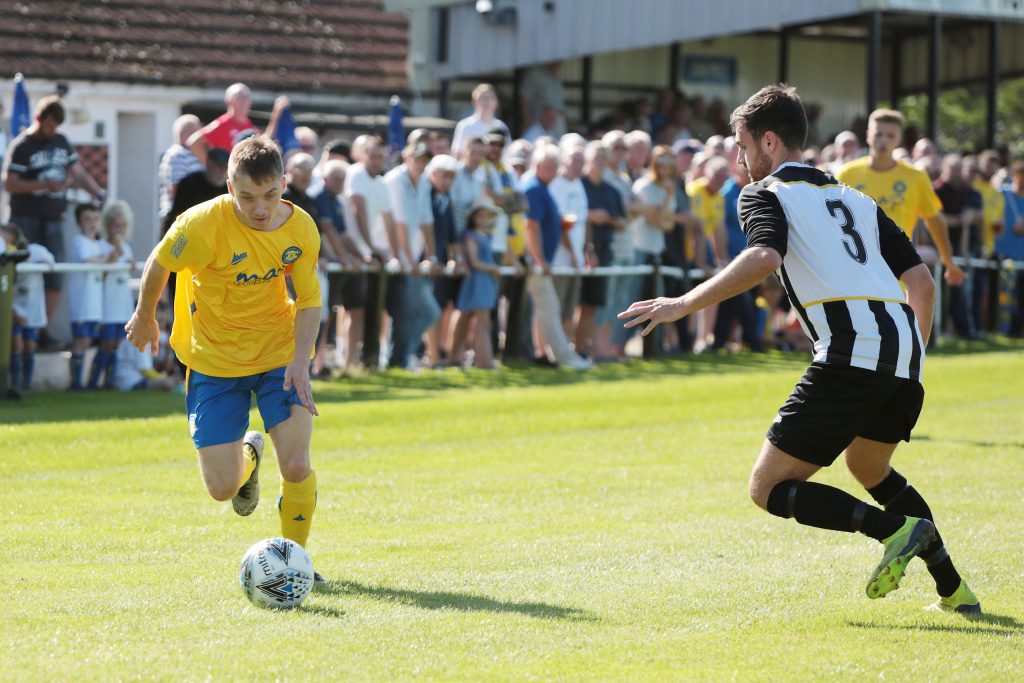 Try as they did, the hosts were unable to breach the Anchors defence and it was a second consecutive clean sheet for the men in yellow. The win marks another impressive away display from Michael Dunwell’s side who now extend their unbeaten start to the campaign to six games. Most importantly though, it books Stockton’s place in the next round of the world’s most famous cup competition.