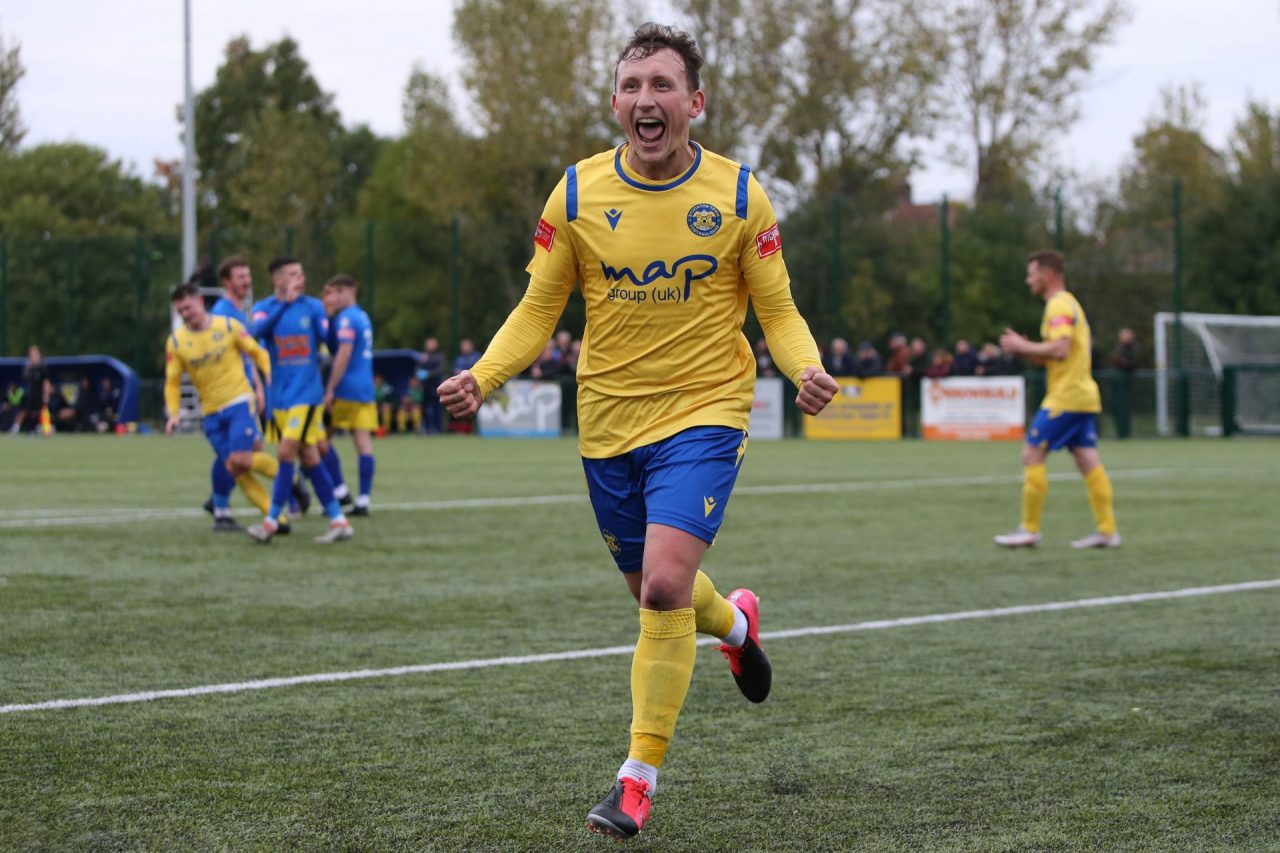 Roberts slotted home from the spot midway into the second half, before rounding off the performance with a tap-in from a yard out following a sensational piece of skill from Kev Hayes.

Jamie Owens equalised for the Anchors with a magnificent finish in the 53rd minute after Lewis Taylor headed the Pikes in front midway through the first half.

Kev Hayes added a late third with a cool finish across the face of goal, as Stockton came from behind to pick up a vital three points before a meeting with the league-leaders Liversedge on Saturday.

Michael Dunwell named three changes from the side which drew to Frickley Athletic a fortnight ago, with Louie Hall, Dale Mulligan and Jamie Owens coming into the starting eleven in place of Tom Coulthard, Lewis King and Nathan Steel.

Stockton were close to opening the scoring inside 10 minutes, Jonathan Franks saw a right-footed shot tipped onto the crossbar by Adam Kelsey.

The Anchors were awarded a spot-kick after 12 minutes, Mikey Roberts was brought down by Ben Clappson and Nathan Mulligan stepped up but his kick was saved by Kelsey.

Pickering took the lead against the run-of-play, Wayne Brooksby sent in a cross which Taylor glanced in towards the far post.

Just moments later, Adam Nicholson went close to equalising twice; first with a cushioned header from Franks’ corner before a second header was cleared off the line by goalscorer Taylor.

Stockton came out for the second-half with fresh intent and were rewarded after eight minutes of the half, Owens broke into a pocket of space and fired a rocket into the far top corner of the goal from a narrow angle.

Amidst the celebrations, Clappison sent a hand into the face of N. Mulligan and after lengthy discussions with his assistants, the referee only booked the Pickering no.5.

The Anchors were awarded a second spot-kick when Nicholson was pushed in the back and M. Roberts stepped up and confidently fired his spot-kick into the corner.

Dan McWilliams sent through Roberts with a smartly disguised pass and as Hayes looked to pull back to Roberts, it was deflected wide for a corner.

Shane Henry drove forward from the midfield before cutting a through ball to Hayes, who converted across goal on his right foot.

Hayes was close to adding his second of the match with a fizzing effort on his left foot, before the winger produced a piece of magic to dance past a defender and put it on a plate for Roberts to tap in.