Stockton Town completed their 4th double of the season, with this 5-0 win over Ashbrooke Belford House to close the gap on Redcar Athletic to 2 points with 5 games in hand at the top of the Wearside League.

The game started in sunshine by half time it was sleet/snowing, this continued through most of the second half, this made it difficult for the players with visibility and controlling the ball very difficult. 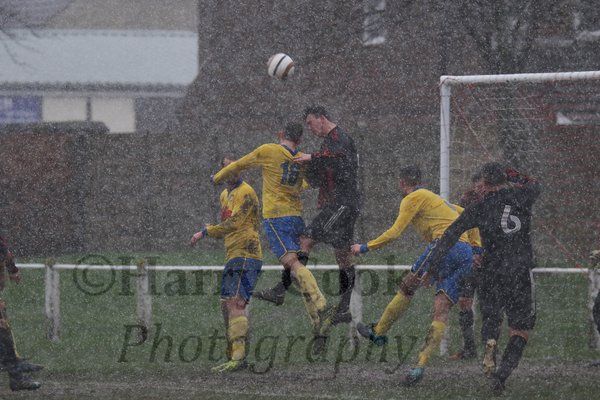 Kallum Hannah was given a golden opportunity to record his 150th Stockton Town goal after 14 minutes, Chris Stockton tried to placed the ball past defender Callum Charlton for Ben Priestley, but Charlton knocked the ball back with his hand and the referee awarded a spot kick, that Hannah dispatched sending Wilson the wrong way for him to reach his milestone.

It was 3-0 after 20 minutes Chris Stockton raced into the box but his cross hit defender Kieran Stokoe the ball falling nicely for Stockton again who fired the ball from the narrowest of angles between Wilson and the post for a fine goal.

Then the sleet and hailstones came this gave Ashbrooke their one and only chance, when Simon Petch struck a 20 yard shot that struck Liam Jordan’s bar just before half time.

During the half time interval the hailstones came so when the two teams emerged for the second half the pitch was looking very white.

During this shower Stockton were content to knock the ball about and play on the break for the lively Chris Stockton to run onto as he looked to complete his hat trick, twice he was one on one with Wilson, the first the keeper stopped with his legs the second he forced Stockton wide and he could only fire into the side netting.

Ashbrooke were struggling to stop Stockton with his forward runs, after 86 minutes he raced from the halfway line leaving the Ashbrooke defence standing this time he gave Wilson no chance to complete his hat trick.

After 89 minutes Stockton completed the scoring, Mason Burton failed to clear the ball and Chris Stockton won the ball racing to the edge of the box before firing past Wilson, for his 8th goal of 2016 in the 4 games Stockton have played.