Stockton came away with all 3 points despite having to overcome the loss of a man with over an hour still to play, conceding 2 penalties and against one of the better teams in the Wearside League.

The game started and Stockton still appeared to be in the dressing room as they conceded an early corner and from the resulting short corner an unchallenged cross was forced home at the back post to give Spennymoor a lead in the 1st minute. Stockton slowly started to exert some influence over the game and Atkinson in the Spennymoor goal made a couple of smart saves before Captain Stav Roberts continued his recent goalscoring form when he smashed the ball into the roof of the net in the 24th minute. 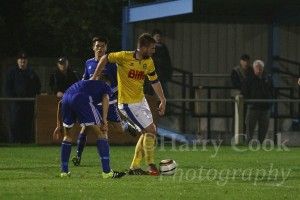 The drama continued within a minute when Stockton defender Tom Coulthard went to block a Spennymoor forwards shot, as the two came together they both tumbled to the floor having appeared to both slip but inexplicably the referee not only pointed to the spot but also red carded the Stockton defender to the outrage of the Stockton players. Up stepped the penalty taker who blazed the spot kick well over the bar. Stockton made a change with Adam Nicholson coming on for Tony Johnson.

This set back seemed to wake Stockton further and on the stroke of half time Max Craggs scored the goal of the game when Stockton went from one end of the pitch to the other in 5 passes, for Craggs to fire home from 12 yards. 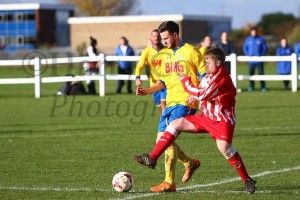 Max Craggs fired Stockton into a half time lead.

The second half started with Stockton well in control and it was that man Stav Roberts who scored from 20 yards with an unstoppable right foot volley on 58 minutes and only 2 minutes later Kallum Hannah curled a left foot effort from the edge of the box into the bottom corner to put Stockton 4 1 up. 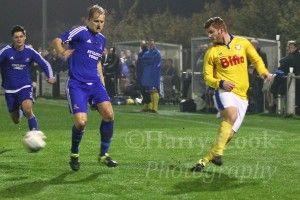 Stockton were by now well on top and it was only in the last few minutes that they tired, when Spennymoor managed to get a goal back in the 86th minute and then were awarded a clear penalty in the 90th minute, which the forward scored after Liam Jordan in Stockton’s goal saved his initial effort.

The final score of 4 3 to Stockton was a great result considering the circumstances with some brilliant performances from all the team, with the stand out Stav Roberts, Adam Nicholson and Chris Stockton to the fore.