Two goals and a red card in the space of five second half minutes saw Stockton Town exit the Durham Challenge Cup in a valiant effort at Newton Aycliffe.

Aycliffe took the lead through Zak Boagey but the Wearside League champions hit back as Tony Johnson scored a brace to take them into the break 2-1 up.

The home side saved themselves in the second half with goals from Alan Harrison and John Campbell. Stockton Town’s challenge was ultimately ruined when Chris Stockton was given his marching orders for a off the ball incident with Dan Mitton.

This game promised to be interesting encounter, in the Wearside League Stockton Town had swept pretty much all before them. Newton Aycliffe, 5th in the Northern League after a decent start to the season, promised their toughest game since Redcar Athletic back in August.

Right from the off Stockton seemed up for the game and they had the first shot when James Ward struck wide after he received the ball from Stockton.

Ward was then in the action four minutes later when his freekick was met by Adam Nicholson who sent the ball wide.

It took until the 10th minute for Aycliffe to get their first shot away when Campbell hit a shot over the bar.

In the 28th minute Stockton had two decent chances to open the scoring. First Ward’s freekick from the right was cleared behind by an Aycliffe defender just before it could reach the head of a Stockton attacker.

Then a corner from the right was headed towards goal but an Aycliffe defender was on hand to clear away.

On the half hour mark, Aycliffe missed the best chance of the game when Campbell fired wide after he was played in by Boagey.

The home side came close again minutes later when Stuart Banks effort from the edge of the box struck the post after it had squirmed under the hands of Stockton Town goalkeeper Liam Jordan.

Aycliffe eventually did get their goal in the 33rd minute when Boagey elegantly lobbed the ball over Jordan from outside the area.

That lead was short lived though as Stockton levelled when Johnson tucked the ball home after Matthew Garbutt’s cross ricocheted into his path. 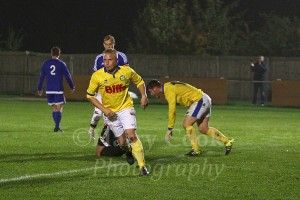 Tony Johnson turns away after firing in Stockton’s equaliser to make it 1 1.

In the 42nd minute Stockton took the lead when Johnson finished past Mooney after he was played in by Kallum Hannah.

Stockton would take that lead into halftime when Campbell was denied after he sent a tame shot at Jordan.

Near the hour mark Stockton missed the chance to increase their lead when Nicholson headed wide after Stockton hit Garbutt’s cross towards him.

Stockton would rue that miss as Aycliffe levelled when Harrison burst through before he confidently finished past Jordan.

Minutes later Aycliffe turned the game round when Campbell showed the sort of class that saw him playing in the Football League last season by firing in a freekick in off the post from 30-yards.

Soon after the visitors challenge was ended when Stockton received a second yellow card following an off the ball incident with Aycliffe defender Mitton.

In the final twenty-five minutes Stockton were unable to find a way back into the game as the referee spoiled proceedings by blowing up every time any player fell to the floor.

With defeat, Stockton Town can now fully focus on retaining all of their Wearside League silverware and securing a promotion to the Northern League. Tonight’s game certainly proved they have what it takes to cut in Northern League football.

Next up for Stockton Town is a trip to Whitehaven in the Wearside League a week on Saturday.